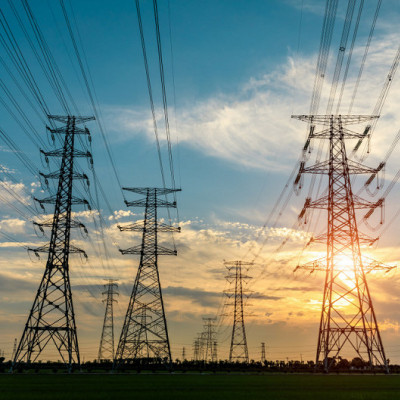 The C-Crete team, led by Dr. Rouzbeh Shahsavari, in collaboration with major utility companies, will bring an insulating nanofluid technology to energy market.

C-Crete Technologies has been awarded $1.5M from the U.S. Department of Energy's Advanced Research Projects Agency-Energy (ARPA-E) to develop and commercialize nanotechnology-enabled fluids for large power transformers (LPTs) with the goal of doubling the lifetime of this highly expensive equipment. The 100- to 400-ton LPTs, which cost millions of dollars to manufacture, prepare electricity for transmission from a generating plant to end users.

Transformers, which are essential elements of the U.S. national grid system, step up or down voltages for efficient electricity transmission. Their key cause of failure is overheating, which becomes more likely over time due to the breakdown of the mineral oil that dissipates heat and insulates the windings and metal cores within the transformers. C-Crete Technologies will integrate a series of advanced surface chemistry, colloidal engineering, high-throughput characterizations, and pilot demonstrations to develop novel insulating nanofluids with a projected 80-year lifetime.

"Current statistics reveal that the typical service life of transformers that fail due to insulation problems is less than half the expected lifetime of 40 years, and 75 percent of the high voltage transformers' collapse is due to dielectric insulation issues," says Dr. Rouzbeh Shahsavari, founder and president of C-Crete Technologies.

"This existing problem, along with the development of more demanding power transmission-distribution systems for the high-voltage networks and smart grids of the future require high-performance heat-dissipation fluids with high dielectric strength, thermal conductivity and aging performance," says Shahsavari.

The aging of the more than 2,500 oil-immersed LPTs in the U.S. is a growing concern for utilities. Not only do they cost millions of dollars, LPTs have a procurement lead time of a year or more.

"Generally tailored to customer specifications, LPTs are not readily interchangeable, and their high costs prohibit extensive spare inventories," says Negar Rajabi, the tech-to-market lead of C-Crete Technologies. "In addition, many are approaching or exceeding their design lives. Thus, utilities have resorted to practices that elongate the lifetime to maintain the existing fleet of transformers. This calls for novel insulation technologies to be adopted by industry."

C-Crete's nanofluid technology has applications in other diverse markets such as automobiles, lubrications, nuclear cooling, thermal energy storage, and microelectronics. "We can explore other heat-transfer fluid applications where water, ethylene glycol and engine oils have not been successful," says Shahsavari.

C-Crete Technologies works at the intersection of materials science, nanotechnology, multiscale computations, predictive analytics, software, hardware and manufacturing to drive the next generation of innovations for a low-carbon and energy-efficient world.