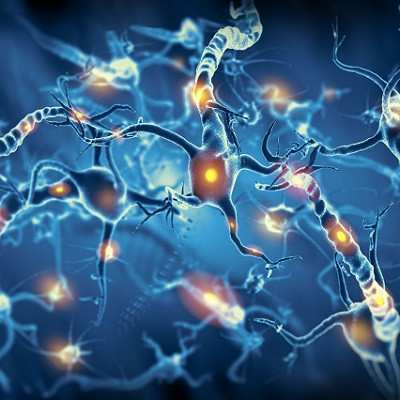 “Given the increasing use of brain stimulation in human brain study and treatment of neurological diseases, this research can make a big impact on physicians and their patients,” said Xiaoming Jin, PhD, associate professor of anatomy, cell biology and physiology.

When someone experiences a brain injury, nerve injury, or neurodegeneration, such as in epilepsy and TBI, there is damage to the brain which can lead to loss and damage of nerve or neurons and development of hyperexcitability that underlies some neurological disorders such as neuropathic pain and epilepsy. 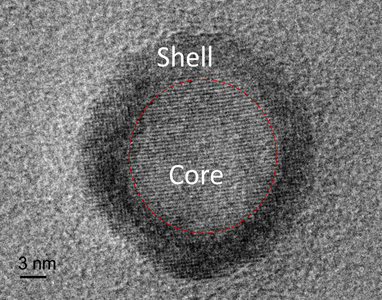 A transmission electron microscope image demonstrates a magnetoelectric nanoparticle with the magnetostrictive core and piezoelectric shell (shown with broken red line) of the coreshell nanostructure.

“The conventional treatment is mainly to try to directly inhibit such hyperexcitability,” Jin said, “but we found the initial damage of the brain or nerve system was caused by a loss of brain tissue, which causes the nervous system to compensate for loss of function by working harder, so we need to stimulate activity instead of inhibit it.”

The technique, described in a newly published paper in Neurotherapeutics, uses a new type of magnetoelectric nanoparticles that can be delivered to a specific part of the brain using a magnetic field. After, a magnetic wave can be emitted to stimulate neural activity in that particular part of the brain. The method is noninvasive, good for stimulating deep brain function and is more efficient than traditional methods of brain stimulation, without the need for genetic manipulation.

“This is the only new type of nanoparticle that allows us to effectively stimulate the brain without doing any invasive procedures,” Jin said. “We can inject the nanoparticle as a solution into the vein and then bring it to any part of the body. When you apply a magnet on the head, you can localize and deliver the nanoparticle to the targeted brain region.”

Read the original article on Indiana University School of Medicine.