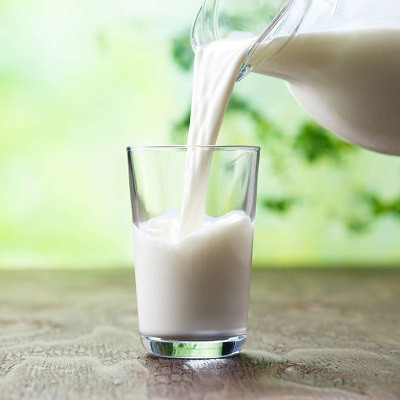 A new biosensor modified with CNT/Au nanoparticles is not inferior in its analytical capabilities to known analogs, and in some cases even surpasses them and can be used for milk quality control.

It was found that diclofenac is a reversible tyrosinase inhibitor (a decrease in the analytical signal is observed), which makes it possible to determine it using appropriate biosensors modified with nanomaterials in the concentration range from 10 pM to 1 μM with CH 5 pM.

Modification with composites of CNT / Au NPs and fullerene C60 / Au NPs made it possible to improve the analytical characteristics of the developed biosensors, in particular, to expand the range of determined concentrations and reduce CH compared to the unmodified analogue.

Kinetic studies of the reaction of enzymatic conversion of phenol showed that noncompetitive inhibition is observed  in the presence of diclofenac on a tyrosinase biosensor.

The content of this drug in food is strictly regulated by European Union regulations, according to which the MPC for diclofenac in milk is 0.1 μg / l. In this case, diclofenac was not detected in four studied milk samples with 1.5% fat content.

To assess the correctness of the results obtained for the determination of diclofenac using the developed biosensors, the method of fluorescence polarization was used.

The results show that the developed tyrosinase biosensor modified with CNT/Au NPs is not inferior in its analytical capabilities to known analogs, and in some cases even surpasses them and can be used for milk quality control.

Currently, non-steroidal anti-inflammatory drugs (NSAIDs) are often used as analgesics and anti-inflammatory treatment in diseases of the musculoskeletal system. Drugs of this class have a wide range of side effects, which, according to statistics, manifest in 10% of patients. NSAIDs are used in veterinary medicine to treat cattle and, therefore, can be found in dairy products. With that in mind, the content of NSAIDs in food should be strictly controlled. Diclofenac is one of the widely used medications of this class.

Since the presence of diclofenac in baby food is unacceptable, and its content in food products is subject to strict control, the determination of the content of this drug in food products, such as dairy, meat, and processed products, is very important. Recently, information about the content of diclofenac in seawater and wastewater has become increasingly common, so monitoring the content of the drug in them is also an important task. Further improvement of biosensor devices with the involvement of modern ideas about the role of the surface in the mechanism of analytical response will be very useful both for solving specific problems and for the development of the theory of biosensorics in general.

The study appeared in the Journal of Analytical Chemistry.