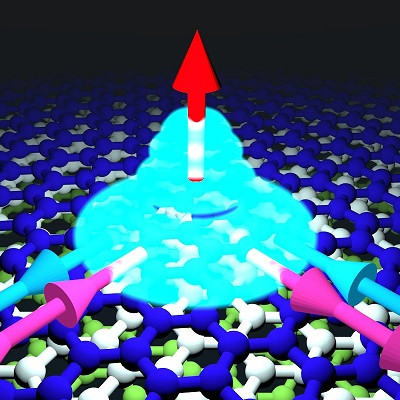 “Heavy fermions” are an appealing theoretical way to produce quantum entangled phenomena, but until recently have been observed mostly in dangerously radioactive compounds. A new paper has shown it is possible to make heavy fermions in subtly modified graphene, which is much cheaper and safer.

Rare-earth compounds have fascinated researchers for decades due to the unique quantum properties they display, which have so far remained totally out of reach of everyday compounds. One of the most remarkable and exotic properties of those materials is the emergence of exotic superconducting states, and particularly the superconducting states required to build future topological quantum computers.

While these specific rare-earth compounds, known as heavy fermion superconductors, have been known for decades, making usable quantum technologies out of them has remained a critically open challenge. This is because these materials contain critically radioactive compounds, such as uranium and plutonium, rendering them of limited use in real-world quantum technologies.

New research has now revealed an alternative pathway to engineer the fundamental phenomena of these rare-earth compounds solely with graphene, which has none of the safety problems of traditional rare-earth compounds. The exciting result in the new paper shows how a quantum state known as a “heavy fermion” can be produced by combining three twisted graphene layers. A heavy fermion is a particle – in this case an electron – that behaves like it has a lot more mass than it actually does.

The reason it behaves this way stems from unique quantum many-body effects that were mostly only observed in rare-earth compounds until now. This heavy fermion behavior is known to be the driving force of the phenomena required to use these materials for topological quantum computing. This new result demonstrates a new, non-radioactive way of achieving this effect using only carbon, opening up a pathway for sustainably exploiting heavy fermion physics in quantum technologies.

In the paper authored by Aline Ramires, (Paul Scherrer Institute, Switzerland) and Jose Lado (Aalto University), the researchers show how it is possible to create heavy fermions with cheap, non-radioactive materials. To do this, they used graphene, which is a one-atom thick layer of carbon. Despite being chemically identical to the material that is used in regular pencils, the sub-nanometre thickness of graphene means that it has unexpectedly unique electrical properties. By layering the thin sheets of carbon on top of one another in a specific pattern, where each sheet is rotated in relation to the other, the researchers can create the quantum properties effect that results in the electrons in the graphene behaving like heavy fermions.

“Until now, practical applications of heavy fermion superconductors for topological quantum computing has not been pursued much, partially because it required compounds containing uranium and plutonium, far from ideal for applications due to their radioactive nature”, says Professor Lado, “In this work we show that one can aim to realize the exactly very same physics just with graphene. While in this work we only show the emergence of heavy fermion behavior, addressing the emergence of topological superconductivity is a natural next step, which could potentially have a groundbreaking impact for topological quantum computing.”

Topological superconductivity is a topic of critical interest for quantum technologies, also tackled by alternative strategies in other papers from Aalto University Department of Applied Physics, including a previous paper by Professor Lado. “These results potentially provide a carbon-based platform for exploitation of heavy fermion phenomena in quantum technologies, without requiring rare-earth elements”, concludes Professor Lado.