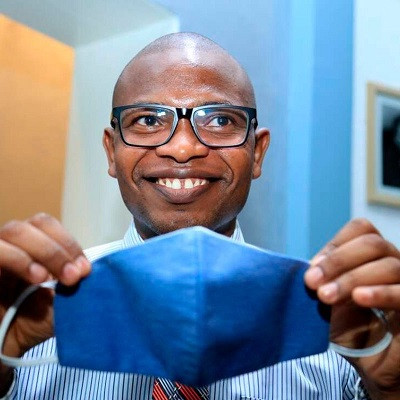 A Kenyan scientist and doctor at Kenyatta National Hospital has created an antiviral surgical mask that kills viruses on contact.

The new innovation, called a nanomask, is the creation of Dr Joseph Nderitu, who, when Covid-19 struck, saw how some masks in the market were substandard and caused allergic reactions for some wearers. He said even doctors who wore two masks, one on top of the other, were still getting infected.

“The problem with regular surgical masks, even those with high filtration efficiency, are just mechanical filters. As you breathe, some of the microbes are filtered, some are not,” he said.

He wanted to produce a mask that not only filtered but also killed microbes, was reusable and could reduce allergies, like the peeling of skin and the inhalation of allergic agents that cause asthma.

“I tested different things. In the end, I used woven fabric so that it could be washed multiple times without losing the antimicrobial qualities. The fabric had to be specially manufactured from scratch, and treated with nanoproducts.”

Once successful, he approached Bedi Investments, a textile manufacturer in Nakuru. With the company’s help, they eventually manufactured an antimicrobial fabric and made the masks, trading as Tiira Nano Mask. But the product had first to be tested and approved by the National Microbiology Reference Laboratory under the Ministry of Health.

The evaluation test was to verify the antimicrobial potency of the fabric, said a report by Caroline Mbogori, the head of the laboratory. It was measured against antibiotics known to have potent activity against five common bacteria known to cause hospital-acquired infections.

The textiles were placed in an agar plate inoculated with specific bacteria and incubated at 37 degrees Celsius for 24 hours. The presence of growth was then checked.

The second test, called the inoculum absorption test, involved two swatches of fabric being spiked with the test bacteria, then it is left in a sterile petri dish.

The samples were tested at different exposure times - one hour, four hours and 24 hours. The spiked fabric samples were then cultured onto culture media and incubated at 37 degrees Celsius for 24 hours. The results for both tests were that there was no bacterial growth.

“Nano composite fabric is bactericidal after the exposure time…the fabric has no antibacterial activity for the specified exposure time,” read the report.

“I haven’t bought or used a disposable mask since last year, and I haven’t contracted Covid-19 either. We made more of them in February this year, but I’ll probably not manufacture more given how rigorous the process is and the availability of cheap alternatives,” Dr Nderitu said.

“But it gives me hope that I can go ahead and produce more impactful products.”

Mercy Wangai, a faithful nanomask user, said that when she used surgical masks, she developed pus-filled pimples that, when they healed, left scars.

“When I went to see a doctor, she told me I had an allergic reaction, because the pimples were only manifesting on the areas covered by the masks. She recommended the nanomask, which I have used for three months without getting allergic reactions,” she said.

Dr Nderitu’s passion for nanomedicine began 16 years ago when he was an intern at Nyeri County Referral Hospital. He said he was “welcomed by the shock of a hospital lacking the most basic resources and with so many desperate patients”. The patients depended on his decisions for survival.

“I remember walking into this surgical ward, where patients lay with large, hideous wounds. Many, some with diabetes mellitus, had been there for months hoping that a change of antibiotic would work, or that they would be lucky to go to theatre for surgical cleaning,” he said.

“I had spent the following months operating on wounds, prescribing antibiotics, which weren’t available in the hospitals, and, worst of all, performing amputations.”

“In cases of diabetes mellitus, high blood sugar compromises the immune system and makes antibiotics ineffective against the bacteria. In turn, the worsening wound infections make it difficult to control the blood sugar, leading to a vicious cycle where amputation is the only choice,” he said.

“These and other experiences in hospital drove me to explore further the possibilities promised by nanotechnology. After reading thousands of pages of scientific publications, I wanted to try it out.”

“I got serious with it and by mid last year I had not only perfected a process of producing nanoparticles, but also a method of producing nanomaterials which could kill bacteria, viruses and fungi,” he said.

Dr Nderitu explains that using antibiotics on chronic wounds is not only wasteful but is the biggest driver of antimicrobial resistance, which is healthcare’s worst nightmare.

This is where nanotechnology comes in, by developing nanomaterials that, when used as wound dressing, prevent and cure wound infections.

“Moreover, it can eliminate cases of surgical site infections, catheter-related infections and others. It would also be very useful in the military to treat injured solders,” he said.

“However, it’s not an easy process. And even if I could get past the manufacturing challenges, more daunting tasks such as clinical trials and other regulatory hurdles still have to be dealt with.”

Looking ahead, he also hopes to develop a filter that will kill microbes in medical air to prevent ventilator acquired pneumonia (VAP), which is responsible for a quarter to one-third of ICU deaths in developed nations, and potentially double that number in developing countries.

“VAP troubles doctors for the same reasons as chronic wounds -  the microbes causing it, carried in medical air, are likely resistant strains that survive all the antibiotics thrown at them. Here too, where antibiotics are no cure at all, prevention is the only way.”

The main challenge, he said, is that nanotechnology is a new field of science and, therefore, there aren’t readily available how-to manuals and ready-made equipment. There aren’t people with whom to consult and bounce ideas. It is a rather expensive undertaking.

The nanomasks, because they are made of fabric, also tend to lose their efficiency when the fabric wears out. The wear is accelerated by vigorous washing with strong chemicals.

“When a fabric starts wearing out, the fibres get thinner, thus the gaps between fibres get wider. That reduces the filtration efficiency, making it less protective. The nanomask will have a slightly longer life than nonrelated fabric because nanoparticles make the fabric structurally stronger, but up to a point. As a result, we recommended 100 wash cycles,” he said.