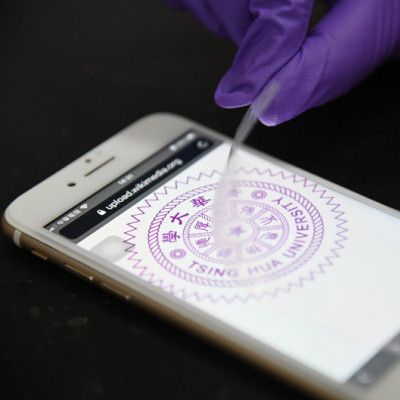 A research team led by Professor Jyh-Ming Wu of the Department of Materials Science and Engineering at National Tsing Hua University (NTHU) in Taiwan has recently developed two composite piezoelectric materials extracted from common waste products. One is a new type of catalyst extracted from discarded rice husks and is capable of treating industrial wastewater 90 times quicker than the photocatalysts now in use. The other is a material extracted from discarded squid bones and has been used to produce a self-sanitizing transparent film suitable for use as a cover on mobile phone screens, elevator buttons, door handles, etc.

Organic industrial wastewater is typically treated by using photocatalysts; however, conventional photocatalysts require sufficient light, and wastewater is usually not very transparent, so the efficiency tends to be low. With this problem in mind, Wu's research team extracted silicon dioxide from rice husks and then added molybdenum and sulfur to produce a quartz composite piezoelectric material. The material can be injected into a factory's wastewater pipeline wherein the pressure generated by the water flow helps to purify the pollution without needing any light.

This new type of quartz composite piezoelectric material can also cope with the difficult-to-treat dyes present in the wastewater produced by textile factories. Professor Wu demonstrated this by pouring the quartz composite powder into a beaker of water colored with dyes, mixing it in by gently agitating the beaker; within a few minutes, the water has become perfectly clear.

Wu explained that what makes this new material so effective is the addition of molybdenum and sulfur during the production process; as a result, pieces of molybdenum disulfide grow on the quartz rod—which takes on the appearance of a mace—increasing the contact area between the material and the sewage, thereby making the treatment more efficient.

The research team's work has recently been featured in the international journals Advanced Materials and Advanced Functional Materials, and their quartz composite material has already received patents in Taiwan and the United States.

Wu's research team has also succeeded in extracting chitin from squid bones and using it to produce a new composite piezoelectric material suitable for producing a transparent film which undergoes self-sterilization whenever it's touched, making it highly suitable as a screen cover for various items in public places, such as automated ticketing machines.

Wu demonstrated the film's sanitizing effect by smearing a sample with Escherichia coli, applying pressure for 25 minutes, then removing the pressure and waiting five minutes. After five repetitions of this procedure, the Escherichia coli was reduced by 76%.

The chitin used to make this new piezoelectric material can also be extracted from shrimp shells, crab shells and cuttlefish bones, and it can also be manufactured using bionic technology. Due to its suitability for producing a self-sterilizing transparent film for covering screens, such as those used on mobile phones, this new material can play a key role in fighting the spread of infectious diseases.