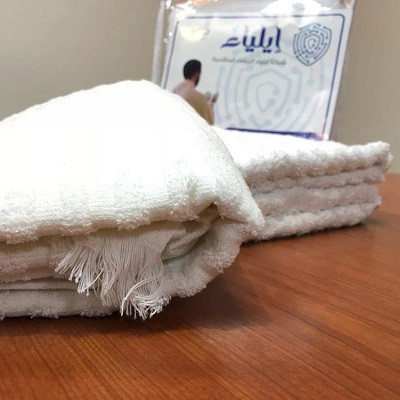 Outfit made of cotton fabric and nanofibers that prevent reproduction of bacteria.

During the Haj 2021 season, Saudi Arabia will be using technical capabilities to provide innovative and high quality services, to facilitate the performance of the pilgrims’ rituals, local media reported.

Among these techniques is the nano-Ihram clothing, the two-sheet outfit, made of unstitched white cloth, worn by men during Haj, and treated with silver nanofibers.

The silver nanofibers, developed by Saudi inventor Hamad Bin Ali Al Yami, being used in the Haj season for the second year in a row, is distinguished by its cotton fabric that prevents the reproduction of bacteria, and enhances preventive measures for the safety of pilgrims.

Men’s Ihram clothing is strict, however, a woman can wear regular clothing. It is important that any clothing worn is chosen with the intention of entering Ihram and ensures it protects the wearer’s modesty.

The idea of nano-Ihram clothing dates back more than three years with the aim of limiting the transmission of infection among pilgrims, especially with the varying duration of wearing Ihram while performing rituals, and the level of personal care, in addition to the effect of the industrial materials incorporated with cotton in the Ihram fabric, Al Yami said.

He explained the use of silver nonofibers in the fabric of Ihram was prompted by the fact that the metal was used in medicine in the past as an antiseptic for wounds, and as a purifier when placed in water vessels. “Silver is used globally to sterilise surgical tools, doctors’ clothes and medical teams in hospitals, and from here was the idea of using this technology in making Ihram clothing,” Al Yami said.

“What encouraged me most was that the Custodian of the Two Holy Mosques Institute for Haj and Umrah Research conducted in 2008 an experiment that relied on nanotechnology in the manufacture of anti-bacterial, anti-fungal and anti-viral materials to purify the carpets in the Two Holy Mosques and the covering of the Kaaba, which showed a decrease in microbial growth,” Al Yami said.