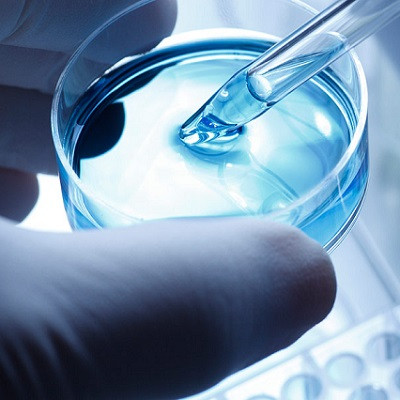 SARS-CoV-2 nanobodies—microscopic molecules developed at the University of Pittsburgh School of Medicine that neutralize the virus in animals—are remarkably active against mutations found in variants, including Delta, according to new research by Pitt and Case Western Reserve University scientists.

The findings, announced in Nature Communications, describe three mechanisms by which the nanobodies disarm the virus, blocking it from infecting cells and causing COVID-19. The near-atomic-level structural analysis provides guidance for the development of future vaccines and therapeutics that may work against a wide variety of coronaviruses—including variants not yet in circulation.

“This is the first time anyone has systematically classified ultrapotent nanobodies based on their structure,” said senior author Yi Shi, assistant professor of cell biology at Pitt. “By doing this, we’ve not only provided details on the mechanisms our nanobodies use to defeat SARS-CoV-2 but also revealed directions for how to design future therapeutics.”

Late last year, Shi and his team announced that they’d extracted tiny, but extremely powerful, SARS-CoV-2 antibody fragments from llamas, which could be fashioned into inhalable therapeutics to prevent and treat COVID-19. Since then, preclinical studies have verified that the potent nanobodies prevent and treat severe COVID-19 in hamsters, reducing virus particles in their respiratory tracts by a million-fold compared to placebo.

In this latest study, Shi partnered with Pitt structural biologists Cheng Zhang and James Conway as well as pharmacologists, structural biologists and biochemists at Case Western Reserve, to use high-resolution cryoelectron microscopy to observe exactly how the nanobodies interact with the SARS-CoV-2 virus to stop it from infecting cells and discover how mutations found in variants may affect nanobody interactions.

“Cryoelectron microscopy has been demonstrated many times to be an extremely useful tool to see high-resolution structural information,” said co-senior author Wei Huang, research scientist in the Department of Pharmacology at the Case Western Reserve School of Medicine. “And nanobodies are versatile and stable biologics that can be used in other research, such as cancer.”

The team selected eight potent nanobodies for further examination. First, they confirmed through observations that several of the nanobodies work against Alpha (a variant associated with the U.K.), Delta (which is associated with India) and several other SARS-CoV-2 variants of concern.

They also classified the nanobodies into three main groups based on how they interact with the spike proteins, which are the protrusions that encircle the spherical coronavirus and act as “keys” that grant the virus entry to human cells:

– Class I outcompetes the part of the human cell that the spike protein binds to, preventing the virus from gaining entry to cells.
– Class II binds to a region on the spike protein that has persisted through several permutations of coronaviruses—including the original SARS-CoV-1. This means it may neutralize SARS-CoV-2 and its variants, but also other coronaviruses.
– Class III latches on to a specific region of the spike protein that larger antibodies cannot access. By binding to this area, the nanobody prevents the protein from folding in the way it needs to for entry into human cells. 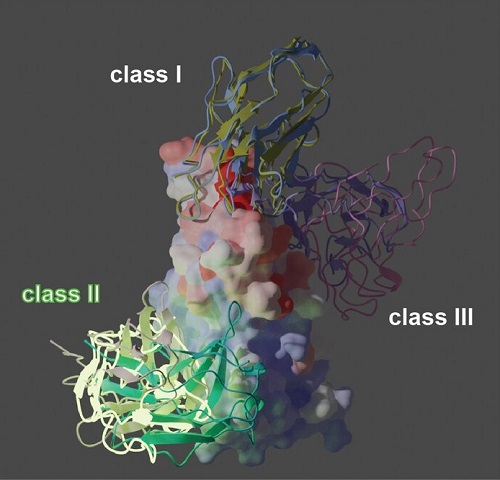 Shown at the center is the surface view of the receptor-binding domain (RBD), which is the key structure domain that SARS-CoV-2 viruses use to infect human cells. The color code on the surface shows how frequently they can mutate, red indicates more, while blue is less mutated. The ribbon-like structures are the structural information that they solved for eight highly potent nanobodies. Their high-resolution structures allow them to classify these potent antiviral nanobodies into three main classes (class I, II and III). Class II can neutralize both SARS-CoV-2 and SARS-CoV, highlighting its broad potency.

“Describing all these vulnerabilities and ways to thwart SARS-CoV-2 and coronaviruses in general has huge potential,” said Shi. “It will not only help our team select and refine nanobodies to treat and prevent COVID-19, but it may also lead to a universal vaccine, preventing not just COVID-19, but SARS, MERS and other diseases caused by coronaviruses.”