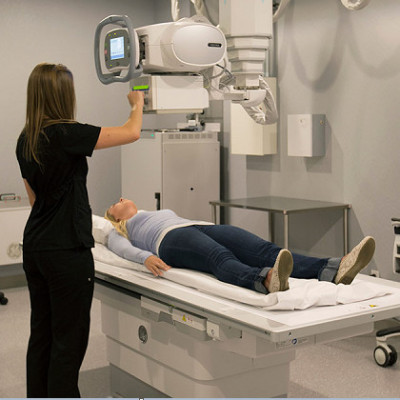 X-ray imaging is a fast and painless way for doctors to see inside a person. But radiation detectors, which go under the body part being imaged, are rigid panels that contain harmful heavy metals, such as lead and cadmium. Now, researchers in ACS’ Nano Letters report a proof-of-concept wearable X-ray detector prepared from nontoxic metal-organic frameworks (MOFs) layered between flexible plastic and gold electrodes for high-sensitivity sensing and imaging.

Most X-ray detectors are integrated into big, immobile instruments, such as computerized tomography (known as CT) and mammography equipment, or are stiff, like the sharp-edged bitewing detectors used in dental offices. Detectors that could conform to rounded body parts or mold to the inside of confined spaces could be beneficial in some radiation monitoring and medical imaging applications.

Previous researchers have used MOFs for flexible radiation detectors because they are semiconducting materials that respond to electromagnetic radiation by creating an electrical current. However, some of these MOFs still include lead, just like the X-ray detectors that are currently in use. So, Shuquan Chang, Shenqiang Ren and colleagues wanted to create a heavy-metal-free MOF for a flexible X-ray detector and imager. 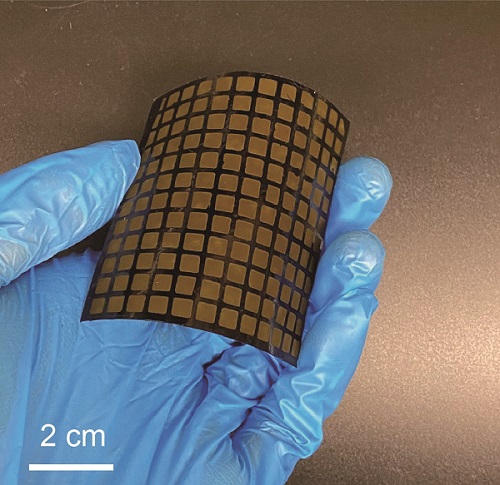 A flexible semiconductive metal-organic framework was incorporated into a prototype wearable X-ray detector for radiation monitoring and imaging.

The researchers mixed a solution of nickel chloride salt and 2,5-diaminobenzene-1,4-dithiol (DABDT) for several hours, creating a MOF in which nickel linked the DABDT molecules. In initial tests, the nickel-containing MOF was more sensitive than recently reported detectors when irradiated with 20 keV X-rays, equivalent to the energy released during medical diagnostic imaging. Then, to make a flexible X-ray radiation detector, the team sandwiched the nickel-containing MOF between gold film electrodes, one of which was on a flexible plastic surface.

They used copper wires to transmit current from each pixel of a 12x12 array and covered the whole device with a silicone-based flexible polymer. Finally, they placed an aluminum letter “H” on the detector and irradiated it with X-rays, measuring a much lower current output underneath the H than under the unimpeded material.

The researchers say that their proof-of-concept device is promising for the next generation of radiology imaging equipment and radiation detection when wearable or flexible devices are needed.