To Reduce Vehicle Pollution, A Single Atom Can Do the Work of Several 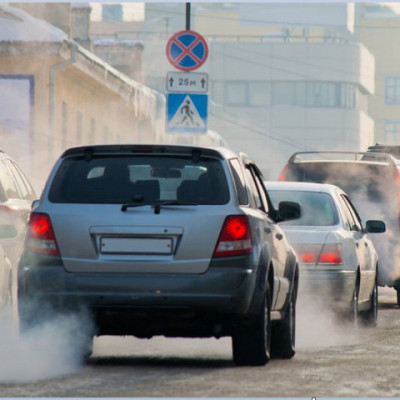 Your ride might be a modest one—but if it burns gasoline, you have precious metals on board. To reduce pollution at the tailpipe, gasoline cars and trucks today come equipped with catalytic converters that contain platinum-group metals such as rhodium and palladium.

Demand for these metals is mounting as countries around the world seek to lower vehicle emissions that accelerate climate change and worsen air quality. Given that a single ounce of rhodium now costs more than $20,000, it's no coincidence that across the United States, thefts of catalytic converters are on the rise.

A discovery by scientists from Pacific Northwest National Laboratory (PNNL) and Washington State University could help reduce the amount of expensive metals needed to treat vehicle exhaust by making the most of every precious atom. In a study published in the journal Angewandte Chemie International Edition, researchers demonstrated success in reducing carbon monoxide and nitrogen oxide emissions using at least three times less rhodium compared to a typical catalyst.

"What we reported here is contradictory to the conventional wisdom that you need rhodium atoms adjacent to each other, in the form of a nanoparticle, to do this chemistry," said Yong Wang, a professor of chemical engineering at Washington State University who holds a joint appointment at PNNL. "We found that a single atom of rhodium can do an even better job of converting pollutants than a rhodium nanoparticle."

The work at PNNL relates to three-way catalysts, named for their ability to reduce carbon monoxide, nitrogen oxide, and hydrocarbons such as methane. Nitrogen oxide is one of a set of pollutants known as NOx, components of smog that also indirectly contribute to atmospheric warming. Carbon monoxide in high concentrations is toxic to humans. Within a vehicle's catalytic converter, these catalysts intercept and dismantle such chemical compounds before they reach the tailpipe. A three-way catalyst will convert NOx into nitrogen and carbon monoxide and hydrocarbons into carbon dioxide.

Aftertreatment systems based on such catalysts have been used for decades with internal combustion engines. But in addition to the skyrocketing prices for precious metals to build these systems, another issue threatens to lower their efficacy. As vehicles become more fuel-efficient, the exhaust isn't as hot. That is a problem for conventional catalysts that were designed to work within the high temperatures of older engines—they simply don’t work as well at lower temperatures.

The U.S. Department of Energy (DOE) has partnered with domestic automotive manufacturers to meet the challenge of designing materials that can convert 90% of tailpipe emissions at 150 °C (302 °F), which is considered "low temperature" in the world of emissions control. Such materials must also be stable enough to hold up over miles and miles of travel.

The PNNL study built on earlier work from Wang and colleagues where they "trapped" single atoms of platinum on a support of cerium dioxide, or ceria—a powder often used in ceramics—by heating the combination to 800 °C (1,472 °F). At such high temperatures, floating metal atoms will begin to stick together, reducing their catalytic powers. But in this study, the platinum atoms became fixed to the ceria support rather than each other. These isolated atoms reacted with the target substances more effectively than if they had clumped together.

The newer study took this same atom-trapping approach with rhodium. Catalysts with only 0.1 percent weight of atomically dispersed rhodium under model conditions met the DOE 150 °C challenge, converting 100% of nitrogen oxide at temperatures as low as 120 °C.

"Buried in the scientific literature, there are reports from the 1970s showing that isolated rhodium atoms could perform this reaction, but those experiments were done in solutions, and the rhodium atoms were hydrothermally unstable," said Konstantin Khivantsev and Janos Szanyi, PNNL researchers who led the study with Wang. "What inspired us was this new approach to doing atom-trapping at high temperatures. With that, we were able to show for the first time that single rhodium atoms could be both catalytically active and stable."

The researchers conducted experiments for the study at the Environmental Molecular Sciences Laboratory (EMSL), a national scientific user facility sponsored by the DOE Biological and Environmental Research program. They used various types of high-resolution imaging, including Fourier-transform infrared spectroscopy (FTIR), transmission electron microscopy, and energy dispersive X-ray spectroscopy, to verify that the rhodium atoms were dispersed individually and reacting effectively with carbon monoxide and nitrogen oxide.

Khivantsev, Szanyi, and Wang said that their findings clear a pathway to make cost-effective, stable, and low-temperature catalysts that use rhodium far more efficiently than current ones. The scientists are also interested in extending the method to other less-expensive catalytic metals such as palladium and ruthenium.