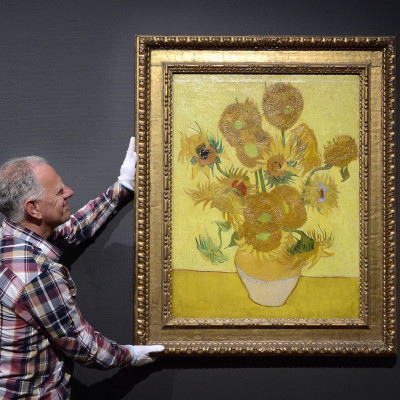 Graphene sticks to any clean surface but can easily be removed without causing damage.

Graphene is the thinnest material yet known, composed of a single layer of carbon atoms arranged in a hexagonal lattice. That structure gives it many unusual properties that hold great promise for real-world applications: batteries, super capacitors, antennas, water filters, transistors, solar cells, and touchscreens, just to name a few. And now this wonder material might just provide a solution to the fading of colors of many artistic masterpieces, according to a recent paper published in Nature Nanotechnology.

"All art establishments are concerned with the discoloration of paintings upon exhibition and storage, since harmful factors such as sunlight, moisture, and certain volatile organic compounds (VOCs) accelerate the degradation," said co-author Costas Galiotis, a chemical engineer at the University of Patras in Greece. "There are many references to well-known endangered artworks, such as [Vincent] Van Gogh's The Bedroom and Sunflowers, or [Edvard] Munch's The Scream."

A variety of culprits are behind the degradation of fine art. For instance, several of Georgia O'Keeffe's oil paintings housed in the Georgia O'Keeffe Museum in Santa Fe, New Mexico, have developed tiny pin-sized blisters, almost like acne, for decades. Conservators have found similar deterioration in oil-based masterpieces across all time periods, including works by Rembrandt. As we've previously reported, conservationists and scholars initially assumed they were grains of sand trapped in the paint. But then the protrusions grew, spread, and started flaking off.

Chemists concluded that the blisters are actually metal carboxylate soaps, the result of a chemical reaction between metal ions in the lead and zinc pigments and fatty acids in the binding medium used in the paint. The soaps start to clump together to form the blisters and migrate through the paint film. Some 70 percent of all oil paintings have deterioration associated with metal carboxylate soaps to varying degrees.

In the case of Van Gogh's Sunflower series, which has been fading over the last century due to constant exposure to light, the culprit seems to be the lead chromate dyes favored by the artist. A 2011 study found that chromium in the chrome yellow Van Gogh favored reacted strongly with other compounds like barium and sulfur when exposed to sunlight. A 2016 study pointed the finger at the sulfates, which absorb in the UV spectrum, leading to degradation.

Last March, scientists took swabs from Renaissance and Renaissance-style pieces and confirmed the presence of so-called "oxidase positive" microbes on painted wood and canvas surfaces. These microbes munch on the compounds found in paint, glue, and cellulose, which are found in paper, canvas, and wood. This in turn produces water or hydrogen peroxide as byproducts. Those byproducts are likely to influence the presence of mold and the overall rate of deterioration of the artworks.

Even contemporary art materials are prone to irreversible color changes from exposure to light and oxidizing agents, among other hazards. There has been recent work on the use of nanomaterials for conservation of artworks. Graphene has a number of properties that make it attractive for art-conservation purposes, according to Galiotis. The one-atom-thick material is transparent, adheres easily to various substrates, and serves as an excellent barrier against oxygen, gases (corrosive or otherwise), and moisture. It's also hydrophobic and is an excellent absorber of UV light.

"It seemed to us the perfect solution to protect colors from photodegradation," Galiotis told Ars. "The innovation of our approach is based on the fact that graphene adheres to any clean surfaces, but it can easily be removed, in contrast to current commercial polymeric coatings. Thus, it exhibits a competitive advantage over other protective materials and substances for the protection of artworks from color fading."

Galiotis and his colleagues developed a roll-to-roll method for transferring a thin layer of graphene to a work of art. This means there is no need for solvents or other chemicals, which can damage the art. First, they synthesized a graphene monolayer veil on copper foil via chemical vapor deposition, then cleaned it with nitrogen gas to remove any dust, dirt, or water molecules. Then they attached the graphene to one side of a commercial polyester/silicon adhesive membrane with a roll-to-roll machine.

But how could they get hold of original paintings to test the safety and effectiveness of their method, given the fact that the work would be destroyed in the process? According to Galiotis, the team had an extensive network of painters in Greece and Europe, but most were reluctant to have their paintings destroyed. Enter Matina Stavropoulou, an artist who became sufficiently fascinated by the group's technique to donate three of her more recent paintings for the experiments, all created using Indian inks on glossy paper placed over a canvas support. "We are very grateful to her for this," said Galiotis.

Stavropoulou's Resistance and Triton and Nereid, each measuring 20x20 cm2, were used for the characterization and aging experiments. Half of the artwork was protected using the team's roll-to-roll method to apply a graphene veil. Both paintings were then artificially aged in an in-house chamber, with one portion of the artwork covered as a reference sample. Resistance was exposed to three neon lamps for 16 weeks, while Triton and Nereid was exposed to a panel of seven white lights for 1,050 hours. The graphene layers in both cases showed no signs of cracks or wrinkles after the aging process.

This is a promising proof of principle in the effectiveness of graphene veils for protecting art from exposure to harmful agents, particularly those created on glossy paper, cardboard, and canvas. However, the authors caution that their method may not be suitable for artworks with extremely rough surfaces or embossed patterns. For those situations, the authors developed a method for the deposition of graphene on museum framing glass for added protection.