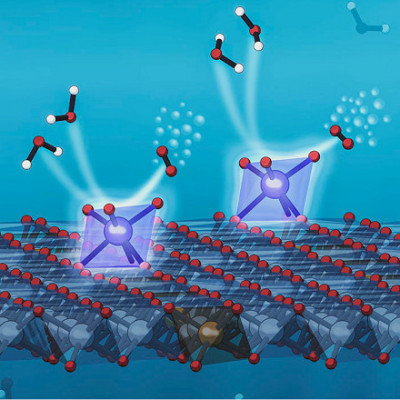 Anchoring individual iridium atoms on the surface of a catalytic particle boosted its performance in carrying out a reaction that’s been a bottleneck for sustainable energy production.

A new way of anchoring individual iridium atoms to the surface of a catalyst increased its efficiency in splitting water molecules to record levels, scientists from the Department of Energy’s SLAC National Accelerator Laboratory and Stanford University reported today.

It was the first time this approach had been applied to the oxygen evolution reaction, or OER ­–part of a process called electrolysis that uses electricity to split water into hydrogen and oxygen. If powered by renewable energy sources, electrolysis could produce fuels and chemical feedstocks more sustainably and reduce the use of fossil fuels. But the sluggish pace of OER has been a bottleneck to improving its efficiency so it can compete in the open market.

The results of this study could ease the bottleneck and open new avenues to observing and understanding how these single-atom catalytic centers operate under realistic working conditions, the research team said.

They published their results today in the Proceedings of the National Academy of Sciences.

Industrial backbones
Catalysts are the backbone of the chemical industry and hold promise for a sustainable energy future. Like matchmakers, they grab molecules from a passing flow of liquid or gas and encourage them to react with each other, without being consumed themselves. To maximize the efficiency of this process, catalyst nanoparticles are typically scattered on the surface of a porous material that offers the largest possible surface area for many reactions to take place simultaneously.

But only the atoms on the outside of a nanoparticle can participate in catalysis; the inner ones go to waste. When the catalyst is a pricey precious metal like iridium or platinum, even a small amount of waste is expensive. So scientists have been working on using individual atoms of these precious metals instead. Each atom is a catalytic reaction center. Their tiny size means a lot more of them can fit on the surface of a given support structure. This greatly increases the amount of active catalyst that’s exposed to the reactants and the number of reactions that can take place at once, boosting efficiency.

In this study, a team led by SLAC/Stanford Professor Yi Cui and SLAC staff scientist Michal Bajdich developed a new way to anchor individual iridium atoms on a supporting surface. Stanford postdoctoral researchers Xueli Zheng and Jing Tang carried out the experiment, aided by theoretical simulation of X-ray data from SLAC associate staff scientist Alessandro Gallo that revealed which configuration would be the most stable and effective.

Atom-by-atom anchoring
To make the new catalyst, researchers first made a porous structure to support the iridium atoms that would catalyze the reaction.

They exposed this foam-like structure to a solution containing iridium compounds, quickly froze it to create a thin, iridium-rich layer of ice on the surface, and did additional processing to create well-distributed sites where individual iridium atoms were snugly anchored on the supportive surface. 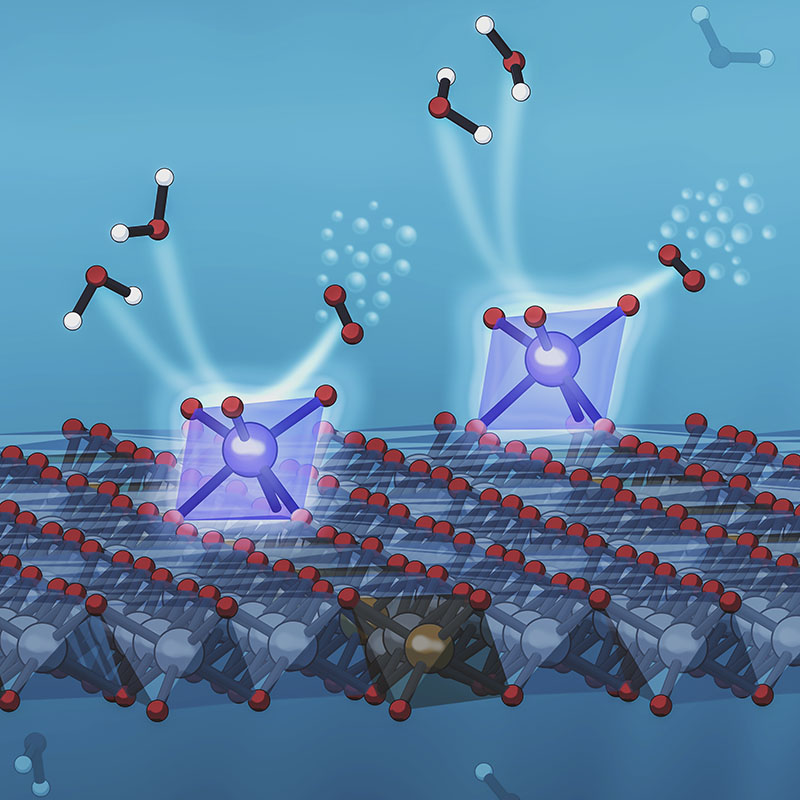 An illustration depicts a new system developed at SLAC and Stanford that anchors individual iridium atoms to the surface of a catalyst, increasing its efficiency at splitting water to record levels. The eight-sided support structures, shaded in blue, each contain a single iridium atom (large blue spheres). The iridium atoms grab passing water molecules (floating above and to the left of them), and encourage them to react with each other, releasing oxygen molecules (above and to the right). This reaction, known as the oxygen evolution reaction or OER, plays a key role in producing sustainable fuels and chemicals. (Greg Stewart/SLAC National Accelerator Laboratory)

X-ray observations of the catalyst at work revealed that the iridium atoms were in a chemical state that makes them exceptionally effective in carrying out the part of the water-splitting reaction that releases oxygen.

Other tests showed that this enhanced activity was due entirely to the fact that the iridium was in the form of single, isolated atoms, and not just to the large surface area on which they were embedded.

The resulting catalyst is better than most of the iridium-based catalysts known to date, the researchers reported. They said this new atom-anchoring system provides an ideal model for probing and establishing the connection between catalysts and their support structures for a variety of electrocatalytic reactions.

Yi Cui is an investigator with the Stanford Institute for Materials and Energy Sciences (SIMES) at SLAC, and Michal Bajdich is an investigator with the SUNCAT Center for Interface Science and Catalysis, a SLAC/Stanford joint institute where theoretical calculations were carried out. X-ray observations of the catalyst were carried out at SLAC’s Stanford Synchrotron Radiation Lightsource (SSRL) and Lawrence Berkeley National Laboratory’s Advanced Light Source (ALS), and computational work was performed at the National Energy Research Scientific Computing Center (NERSC); all three are DOE Office of Science user facilities. Researchers from The Molecular Foundry at Berkeley Lab and the Material Measurement Facility at the National Institute of Standards and Technology also contributed to this work, which was funded by the DOE Office of Science.

Read the original article on SLAC .