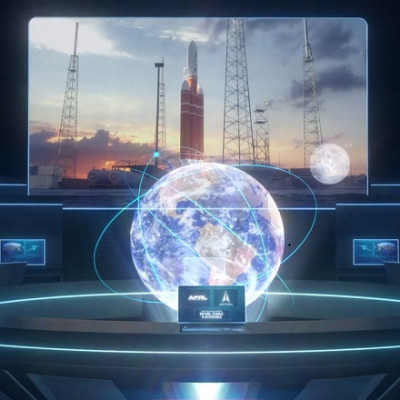 The Air Force Research Laboratory is working to increase availability of rare nanomaterials and strengthen U.S. scientific and manufacturing ties with India.

Nanomaterials are thin – about 1/100,000th of the thickness of a human hair. AFRL and its partners are harnessing nanomaterials’ unique optical, magnetic, electrical, and other properties for improved optoelectronics, quantum devices, high-temperature coatings, thermal management, and more.

But a lack of scalable nano manufacturing has impeded progress, according to “Exploration of Nano Manufacturing Scale up Opportunities with India,” a white paper written by Dr. Ajit K. Roy, Principal Materials Research Engineer and Computational Group Leader in AFRL’s Materials and Manufacturing Directorate.

The white paper was a collaborative effort with representatives from Rice University, India’s Defense Research and Development Organization (DRDO), and the Indian Institute of Technology Kanpur (IITK).

Roy guided the India-nano strategy development effort with the help of co-leads Dr. Nick Glavin and Dr. Michael McConney. Glavin focused on ties to academia in India, and McConney cultivated links to industry.

AFRL Chief Technologist Dr. Tim Bunning was part of a meeting at Rice University on July 29 in which the white paper partners organized for a year-long study of how to leverage India’s scientific and manufacturing expertise to increase the availability of nanomaterials.

AFRL’s 711th Human Performance Wing and the lab’s Sensors, Munitions, and Materials and Manufacturing directorates are contributing expertise to the challenge topics.

After the year of study, the international team will present recommendations in two papers addressing the policy aspect of industrial cooperation, and the tech sprints associated with technical challenges in nano manufacturing.

“The effort will be considered to be a success if the U.S. is able to develop projects with India in advancing scalable and low-cost nano manufacturing technology via leveraging skill and resources between the two countries,” Roy said.

A History of Cooperation

India is a crucial partner of the United States, as we ensure a “A Free and Open Indo-Pacific Region,” Roy said.

The start of substantial defense cooperation between India and the U.S. began in 2005, with the New Framework for the U.S.-India Defense Relationship. And the pace of exchanges and activities has quickened each year since.

In 2012, the Defense Technology & Trade Initiative (DTTI) was established to help eliminate bureaucratic obstacles, accelerate timelines, promote collaborative technology exchange, strengthen cooperative research, and enable co-production/co-development of defense systems for sustainment and modernization of our military forces. In May 2014, Secretary Chuck Hagel appointed Frank Kendall, then Under Secretary of Defense for Acquisition, Technology & Logistics, to lead DTTI. Kendall is now Secretary of the Air Force.

Strengthening international partnerships in science and technology development and manufacturing was one of the cornerstones of the U.S. Air Force/Space Force S&T 2030 Strategy. The Strategy was published in 2019, and the Department of the Air Force/United States Space Force implementing its recommendations.

In September, the Air Force Life Cycle Management Center and the Indian Air Force signed a landmark $22 million agreement to co-develop air-launched Unmanned Aerial Vehicles (UAV). It was the first co-development project under the DTTI.

Roy said the new nano manufacturing initiative has its roots in a successful ongoing project with India DRDO-Jodhpur lab to develop printable flexible electronics (PFLEX). That effort began in June 2018, and involved $10.6 million split evenly between the two countries.

He said there is an increased emphasis — especially from the U.S. side of the Joint Technical Group (JTG) — on India collaboration to include India academics in future Project Agreements (PAs). The JTG oversees S&T collaboration and approves joint projects between the U.S. and India. The group has been in place for several years and meets annually in coordination with all defense services between the two countries.

“India’s top-tier universities offer vast potential for tapping talent and expertise as compared to that of DRDO labs,” he said. “DRDO management is cooperative with this approach and India academics are to be considered in scoping future PAs, which will be a positive direction for potential quid pro quo resource leveraging.”

Roy said the emphasis of his plan was to use PAs to increase participation of India academics through DRDO, which could fund Indian universities with bigger joint projects.

“In the current framework, the projects under the Air Force Asian Office of Aerospace Research and Development (AOARD), and Indo-U.S. S&T Forum funding are resource-limited and small,” Roy said. “But if DRDO and India academics are pulled together, the potential could be huge and long term in India collaboration.”

“Dr. Bunning and I wanted to look at ways we could leverage University – International partnering, and this is one of the first examples where we have initiated an AFRL enterprise engagement through a University-International relationship,” McJilton said.

“This pilot [Air Force S&T 2030 Strategy funded pilot], is paving the way in how we can further engage, partner, and leverage the innovative power of the global ecosystem,” McJilton added.