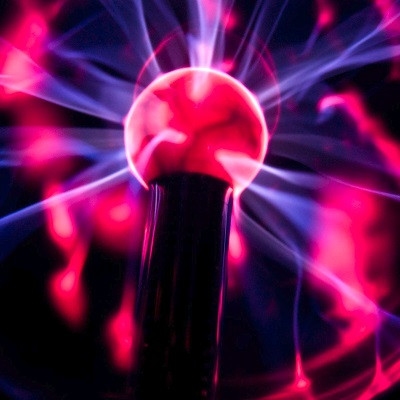 Super strong and only one atom thick, graphene holds promise as a nanomaterial for everything from microelectronics to clean energy storage. But lack of one property has limited its use. Now, researchers at Princeton University and the U.S. Department of Energy’s (DOE) Princeton Plasma Physics Laboratory (PPPL) have overcome that problem using low-temperature plasma, creating a novel technique that opens the door to a vast array of industrial and scientific applications for the promising nanomaterial.

Graphene, which is harder than diamonds and stronger than steel, could be a foundation for next-generation technologies. But the absence of a property called a band gap in the pencil-lead graphite that composes graphene restricts its ability to function as a semiconductor, the material at the heart of microelectronic devices. Semiconductors both insulate and conduct electric current, but while graphene is an excellent conductor it cannot serve as an insulator without a band gap.

“People use silicon that has a band gap for semiconductors,” said Fang Zhao, lead author of a paper in the journal Carbon that describes the new process. “Opening a sizable band gap on graphene has given rise to intense studies for semiconductor use,” said Zhao, a physicist at the Fermi National Accelerator Laboratory (Fermilab) who wrote the paper while a Princeton post-doctoral researcher.

The dilemma has led scientists throughout the world to explore ways to produce a band gap in graphene to expand its potential applications. One popular method has been to chemically modify the surface of graphene with hydrogen, a process called “hydrogenation.” But the conventional way of doing this produces irreversible etching and sputtering that can seriously damage the surface of graphene — known as a 2D material because of its ultrathin nature — within seconds or minutes.

Scientists at Princeton and PPPL have now shown that a novel method for hydrogenating graphene can safely open the door to wide-ranging microelectronic applications. The method marks a new way to produce hydrogen plasma that substantially broadens hydrogen coverage in the 2D material. “This process creates much longer hydrogen treatments because of its low graphene damage,” Zhao said.

Plasma, the hot, charged state of matter composed of free electrons and atomic nuclei, makes up 99 percent of the visible universe. The low-temperature hydrogen plasma that PPPL has developed to hydrogenate graphene contrasts with the million-degree fusion plasmas that have long been the hallmark of PPPL research, which aims to develop safe, clean, and abundant fusion energy for generating electricity.

The new method spins off from an experiment called Ptolemy, a University project that Princeton physicist Chris Tully has been developing with assistance from Zhao. That project uses the decay of tritium, the radioactive isotope of hydrogen, in the effort to capture relic neutrinos that emerged just seconds after the Big Bang that created the universe.  Such relics could shed new light on the Big Bang, according to the Ptolemy project.

To improve the detection rate of the decay, Tully turned to PPPL physicist Yevgeny Raitses, who heads low-temperature plasma research at PPPL. “The readiness of PPPL to join forces and to bring about transformational 2D material properties is inspiring,” Tully said. “Breaking the world-record in graphene hydrogenation yield is a tribute to the unique capabilities of PPPL.”

Raitses and colleagues developed a method for expanding the coverage of hydrogen in the graphene that houses the tritium decay. The process greatly increases future applications of graphene. “This spinoff from Ptolemy can now be used for microelectronics, QIS [quantum information science] and other applications,” Raitses said. “The method can also be applied to other 2D materials.”

The spinoff combines electric and magnetic fields to produce a hydrogen plasma that delivers plentiful hydrogen with low damage to the graphene. This gentle and well-controlled method is itself a spinoff from research that Raitses developed while studying Hall thrusters, plasma-based engines of spacecraft propulsion. The technique has hydrogenated graphene for up to 30 minutes in PPPL experiments, greatly increasing the hydrogen coverage and opening a band gap that turns graphene into semiconductor material.

All this, says the Carbon paper, creates an attractive method for making 2D materials “exciting and up-and-coming [sources] for vast applications.”

Also collaborating on this paper were Princeton physicists Chris Tully and Andi Tan, together with chemist Xiaofang Yang of the Princeton Department of Chemical and Biological Engineering. Support for this work comes from the DOE Office of Science (FES) and the Air Force Office of Scientific Research.