Unmasking the Magic of Superconductivity in Twisted Graphene 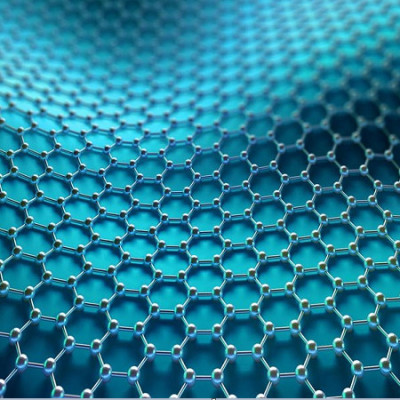 Princeton researchers have reported an uncanny resemblance between the superconductivity of magic graphene and that of high-temperature superconductors.

Ali Yazdani, the Class of 1909 Professor of Physics and Director of the Center for Complex Materials at Princeton University led the research. He and his team have studied many different types of superconductors over the years and have recently turned their attention to magic bilayer graphene. 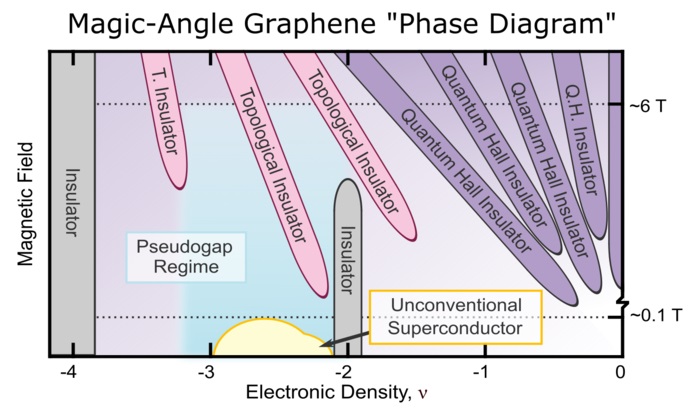 Magic-angle graphene is an incredible multi-functional material, easily tuned amongst a diverse set of quantum phases by changing its temperature, magnetic field, and electronic density. Here, researchers have uncovered essential signatures of its unconventional superconducting phase (yellow), which conducts electricity with zero resistance and zero energy loss, and its previously unknown pseudogap regime (blue), a seemingly necessary precursor to superconductivity.

“Some have argued that magic bilayer graphene is actually an ordinary superconductor disguised in an extraordinary material,” said Yazdani, “but when we examined it microscopically it has many of the characteristics of high temperature cuprate superconductors. It is a déjà vu moment.”

Superconductivity is one of nature’s most intriguing phenomena. It is a state in which electrons flow freely without any resistance. Electrons are subatomic particles that carry negative electric charges; they are vital to our way of life because they power our everyday electronics. In normal circumstances, electrons behave erratically, jumping and jostling against each other in a manner that is ultimately inefficient and wastes energy.

But under superconductivity, electrons suddenly pair up and start to flow in unison, like a wave. In this state the electrons not only do not lose energy, but they also display many novel quantum properties. These properties have allowed for a number of practical applications, including magnets for MRIs and particle accelerators as well as in the making of quantum bits that are being used to build quantum computers. Superconductivity was first discovered at extremely low temperatures in elements such as aluminum and niobium. In recent years, it has been found close to room temperatures under extraordinarily high pressure, and also at temperatures just above the boiling point of liquid nitrogen (77 degrees Kelvin) in ceramic compounds.

But not all superconductors are created equal.

Superconductors made of pure elements like aluminum are what researchers call conventional. The superconductive state – where the electrons pair together – is explained by what is called the Bardeen-Cooper-Schrieffer (BCS) theory. This has been the standard description of superconductivity that has been around since the late 1950s. But starting in the late 1980s new superconductors were discovered that did not fit the BCS theory. Most notable among these “unconventional” superconductors are the ceramic copper oxides (called cuprates) that have remained an enigma for the past thirty years.

The original discovery of superconductivity in magic bilayer graphene by Pablo Jarillo-Herrero and his team at the Massachusetts Institute of Technology (MIT) showed that the material starts out first as an insulator but, with small addition of charge carriers, it becomes superconducting. The emergence of superconductivity from an insulator, rather than a metal, is one of the hallmarks of many unconventional superconductors, including most famously the cuprates.

“They suspected that superconductivity could be unconventional, like the cuprates, but they unfortunately did not have any specific experimental measurements of the superconducting state to support this conclusion,” said Myungchul Oh, a postdoctoral research associate and one of the lead co-authors of the paper.

To investigate the superconductive properties of magic bilayer graphene, Oh and his colleagues used a scanning tunneling microscope (STM) to view the infinitesimally small and complex world of electrons. This device relies on a novel phenomenon called “quantum tunneling,” where electrons are funneled between the sharp metallic tip of the microscope and the sample. The microscope uses this tunneling current rather than light to view the world of electrons on the atomic scale.

“STM is a perfect tool for doing these types of experiments,” said Kevin Nuckolls, a graduate student in physics and one of the paper’s lead co-authors. “There are many different measurements that STM can do. It can access physical variables that are typically inaccessible to other [experimental techniques].”

When the team analyzed the data, they noticed two major characteristics, or “signatures,” that stood out, tipping them off that the magic bilayer graphene sample was exhibiting unconventional superconductivity. The first signature was that the paired electrons that superconduct have a finite angular momentum, a behavior analogous to that found in the high-temperature cuprates twenty years ago. When pairs form in a conventional superconductor, they do not have a net angular momentum, in a manner analogous to an electron bound to the hydrogen atom in the hydrogen’s s-orbital.

STM operates by tunneling electrons in and out the sample. In a superconductor, where all the electrons are paired, the current between the sample and the STM tip is only possible when the superconductor’s pairs are broken apart. “It takes energy to break the pair apart, and the energy dependence of this current depends on the nature of the pairing. In magic graphene we found the energy dependence that is expected for finite momentum pairing,” Yazdani said. “This finding strongly constrains the microscopic mechanism of pairing in magic graphene.”

“One possibility is that electrons are still somewhat paired together even though the sample is not superconducting,” said Nuckolls. “Such a pseudogap state is like a failed superconductor.”

The other possibility, noted in the Nature paper, is that some other form of collective electronic state, which is responsible for the pseudogap, must first form before superconductivity can occur.

“Either way, the resemblance of an experimental signature of a peusdogap with the cuprates as well as finite momentum pairing can’t be all a coincidence,” Yazdani said. “These problems look very much related.”

Future research, Oh said, will involve trying to understand what causes electrons to pair in unconventional superconductivity – a phenomenon that continues to vex physicists. BCS theory relies on weak interaction among electrons with their pairing made possible because of their mutual interaction with the underlying vibration of the ions. The pairing of electrons in unconventional superconductors, however, is often much stronger than in simple metals, but its cause – the “glue” that bonds them together – is currently not known.

“I hope our research will help the physics community to better understand the mechanics of unconventional superconductivity,” Oh said. “We further hope that our research will motivate experimental physicists to work together to uncover the nature of this phenomenon.”