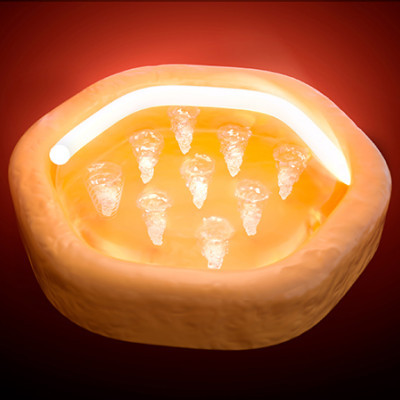 The authors define a new topological invariant called the optical-N invariant to capture a fluidic phase of matter. The circulator is the first in a possible generation of ultra-subwavelength devices that use this topological optical-N insulator as the building block. The researchers came to their discovery by studying the interaction of light with matter at the microscopic level, developing a new theory of topological light in graphene’s viscous fluid. The investigations employed electron and photon hydrodynamics in the presence of a magnetic field.

Graphene has been the focus of intense research in both academic and industrial settings due to its unique electrical conduction properties. As the thinnest material known to man, graphene is essentially two-dimensional and has distinct electronic and photonic properties from conventional 3D materials. Researchers at Purdue University (Todd Van Mechelen, Wenbo Sun and Zubin Jacob) have shown that graphene’s viscous fluid (colliding electrons in solids can behave like fluids) support unidirectional electromagnetic waves on the edge. These “edge waves” are linked to a new topological phase of matter and symbolize a phase transition in the material, not unlike the transition from solid to liquid.

A remarkable feature of this new phase of graphene is that light travels in one direction along the edge of the material and is robust to disorder, imperfections and deformation. Purdue researchers have harnessed this nonreciprocal effect to develop “topological circulators” – one-way routers of signals, the smallest in the world – that could be a breakthrough for on-chip, all-optical processing.

Circulators are a fundamental building block in integrated optical circuits but have resisted miniaturization because of their bulky components and the narrow bandwidth of current technologies. Topological circulators overcome this by being both ultra-subwavelength and broadband, enabled by a unique electromagnetic phase of matter. Applications include information routing and inter-connects between quantum and classical computing systems.