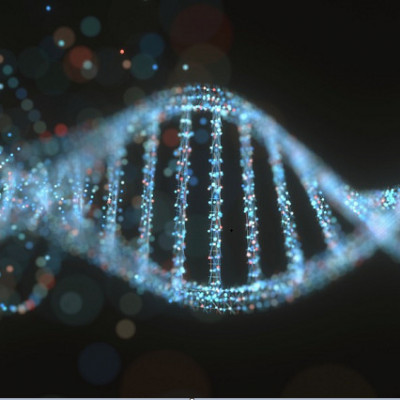 As scientists have probed the mysteries of life down to smaller and smaller scales, they have invented tools to help them understand what they observe. Determining the identity of DNA and RNA molecules has now become commonplace thanks to the commercial development of next-generation sequencing technologies, but the same is not yet true of proteins, which are critically important players in nearly all biological processes. Proteins are much more complex than DNA and RNA, and are often chemically modified, making the goal of easily identifying single proteins within a sample (single-molecule proteomics) challenging to achieve.

Dubbed “DNA Nanoswitch Calipers” (DNC), this technology enables researchers to perform distance measurements on single peptides (molecules that make up proteins) with high precision by applying small amounts of force. By rapidly making many distance measurements on the same molecule, DNC creates a unique “fingerprint” that can be used to identify it in subsequent experiments. The achievement is reported in Nature Nanotechnology.

“When you’re trying to understand something in biology, there are two main methods of inquiry: you can observe your subject in its natural state, or you can perturb it and see how it reacts. Observations can provide lots of great biological information, but sometimes the best way to learn about something is to physically interact with it,” said co-corresponding author Wesley Wong, Ph.D., an Associate Faculty member at the Wyss Institute and Associate Professor at HMS who is also an Investigator in Boston Children’s Program in Cellular and Molecular Medicine. “Determining the pattern of amino acids within a peptide molecule by applying force is a new paradigm in the ongoing scientific quest for techniques that will enable us to sequence proteins as easily as we currently sequence DNA.”

DNC are based on the underlying technology of the DNA nanoswitch: a single strand of DNA with molecular “handles” attached to it at multiple points along its length. When two of these handles bind to each other, they create a loop in the DNA strand, and the overall length of the strand is shortened. When force is applied to pull the handles apart, the strand extends back to its original length. The difference between the length of the strand in its looped and unlooped states reflects the size of the loop, and thus the distance between the handles.

The research team realized that they could take DNA nanoswitches one step further: if they instead engineered the handles to bind to a biomolecule, the handles could effectively “pinch” the molecule between themselves like the two tips of a caliper, rather than binding to each other. By measuring how the addition of the target molecule between the handles changed the overall length of the DNA nanoswitch in its looped vs. unlooped states, the team hypothesized that they could effectively measure the size of the molecule.

“In some ways, DNA nanoswitches harness one of the most classical, mechanical methods for measuring objects: just apply force to something and see how it changes in response,” said co-first author Darren Yang, Ph.D., a Staff Scientist at the Wyss Institute and Boston Children’s. “It’s an approach that we haven’t really seen used in the field of single-molecule proteomics, because applying force to such small objects is incredibly challenging. But we were up to the challenge.”

To turn their idea of a new, force-based measuring technique into reality, Yang and his colleagues first attached two different types of handles to a target molecule: one “strong” handle to firmly anchor the molecule to one end of the DNC, and several “weak” handles that could attach to the other end of the DNC. They then tethered both ends of the DNC to two “optically trapped” beads suspended in laser beams. By moving the beads closer together, they induced one of the target molecule’s weak handles to bind to the DNC, creating a looped state. When they then increased the force by moving the beads further apart, the weak handle eventually released its bond, returning the DNC to its longer, unlooped state.

To create their DNA Nanoswitch Calipers, the team first attached strong (purple) and weak (red) “handles” to a target strand of DNA (a). Then, they attached the strong handle and one weak handle to each end of the DNA Nanoswitch Calipers held between two optically trapped beads. Applying force to the beads (b) caused the weak handle to release, changing the overall length of the structure. Repeated cycles of binding and releasing (c) create a unique “fingerprint” for the target molecule based on the location of the handles. They later repeated this process using peptides as the target molecule.

The team first tested this technique on simple, single-stranded DNA (ssDNA) molecules, and confirmed that the change in distance measurements between the DNC’s looped and unlooped state directly correlated with the length of the target molecule. These length changes could be measured with angstrom-level precision (that’s ten times smaller than the width of a DNA double helix), enabling the identification of changes in length as small as that of a single nucleotide.

Because the target molecule contains multiple weak handles that can bind to the DNC, repeated cycles of binding and breaking those handles creates a series of distance measurements between the strong handle and the weak handles that are unique to each molecule measured. This “fingerprint” can be used to identify a known molecule within a sample, or to infer structural information about an unknown molecule.

Having confirmed that DNC could reliably measure the size of DNA molecules, the researchers shifted focus to their real goal: proteins. They designed a synthetic peptide (a short chain of amino acids) with a known length and sequence and repeated the experiment, attaching it to one end of the DNC via the strong handle and repeatedly attaching and breaking the bonds between its weak handles and the DNC by applying different amounts of force. They found that all of the distances their tool measured between the strong and weak handles matched the distances expected based on the length of the DNC and the lengths of the amino acids in the peptide. They also got similar results when they used the DNC to measure a naturally occurring linearized peptide called NOXA BH3.

This process also generated unique measurement fingerprints for each peptide. The team created a computer model to predict how many human proteins could be uniquely identified using this method, and found that over 75% of the proteins in a commonly used protein database could be identified via fingerprints with a probability of at least 90%.

“We were actually somewhat surprised by how well this technique worked,” said co-first author Prakash Shrestha, Ph.D., a Postdoctoral Fellow at the Wyss Institute and Boston Children’s. “Optical tweezers have been around for decades and cycling DNA between a looped and unlooped state has been around for about 10 years, and we weren’t sure whether we could get sufficiently high-resolution measurements by combining those ideas. But it turned out that these fingerprints are very effective for identifying proteins.”

Identifying single protein molecules is an impressive feat itself, but being able to do that for multiple proteins simultaneously is the true holy grail for single-molecule proteomics. The team further demonstrated that by replacing the optical beads with a magnetic tweezer system, they were able to perform measurements on multiple different peptides in parallel, as well as determine the relative concentrations of different molecules.

“Single-molecule proteomics is still largely a pipe dream due to challenges in scaling and resolution. Our present work shows that force-based sequence fingerprinting has the potential to realize this dream,” said co-corresponding author William Shih, Ph.D., a Core Faculty member at the Wyss Institute and Professor at HMS and the Dana-Farber Cancer Institute. “Our ultimate ambition is to efficiently read not just protein sequences, but also protein structures in a high-throughput manner.”

The scientists’ next step toward that goal is validating their calipers for low-force structural measurements on folded proteins and their complexes, investigating their potential use for structural biology and proteomics. They are also working on increasing the technology’s throughput to further speed up the analysis of mixed samples.

“This research integrates molecular biophysics with cutting-edge DNA nanotechonlogy pioneered here at the Wyss Institute to allow us to interact with and analyze biological molecules in a truly novel way. When William and Wesley first posed this idea as a core challenge for the newly formed Molecular Robotics Initiative, it truly seemed like science fiction, but that is precisely the type of project we want to take on at the Wyss. I’m very proud of the team for making this technology a reality – it has the potential to totally change how we do science and develop therapeutics,” said Wyss Founding Director Don Ingber, M.D., Ph.D., who is also the Judah Folkman Professor of Vascular Biology at Harvard Medical School and Boston Children’s, and Professor of Bioengineering at the Harvard John A. Paulson School of Engineering and Applied Sciences.