Review of the 2021 US Nanotechnology Initiative Strategic Plan 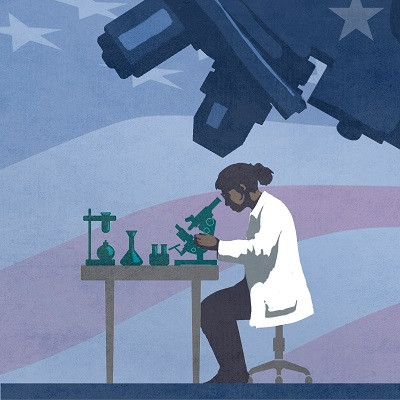 By designing a new framework, the program seeks to sustain US leadership not only in the field of scientific nanotechnology exploration but also in the manufacturing and production of nanotechnology products around the world. The program emphasizes the expansion and modernization of research infrastructures in the United States and develops support for researchers and small businesses across the United States.

In the following, we will take a look at the newly-published nanotechnology strategic plan in the United States and review its most central points and sections.

2– In its latest report in this regard, the Council of Presidential Advisors in Science and Technology offered recommendations on the relationship between the National Nanotechnology Program and the Grand Challenge Program, examination of the impact of new research and commercialization programs on the workforce and productivity in the field of nanotechnology, strengthening entrepreneurship, development of manufacturing innovation institutes, expansion of business partnerships, offering support to creative high-risk research, and provision of effective training for the new generation of interdisciplinary researchers and engineers in the US National Nanotechnology Program.

3– In their report, National Academies of Sciences, Engineering and Medicine, too, provided recommendations on nanotechnology-based solutions and addressed other federal priority areas such as artificial intelligence, quantum, water, energy, food, and agriculture. The academies also emphasized the need to strengthen the network of characterization and production facilities, expansion of a diverse world-class workforce, and supporting the transfer of nanotechnology from research to production.

5– The framework presented in this new program connects the various components of the nanotechnology ecosystem in the United States to fulfill the present and future needs of the nanotechnology community. With a structure similar to previous US nanotechnology strategic plans, it encompasses five goals, each of which including several objectives. The new program has one more goal, in comparison to the previous ones, which explicitly emphasizes the paramount significance of training and workforce. Also, according to the recommendations of the two evaluation bodies in the new program, more executive tasks and coordination have been set for Nanoscale Science, Engineering, and Technology (NSET) Subcommittee of the NSTC and he National Nanotechnology Coordination Office (NNCO). The United States still seems to be trying to build on the experience of previous years in nanoscience and nanotechnology policy-making and, if necessary, to design new mechanisms.

6– The first goal of this program is "sustaining United States as a global leader in nanotechnology research and development." At the heart of NNI is its support for nanotechnology research and development, with the National Nanotechnology Initiative Supplement to the President's 2021 Budget receiving the lion’s share (44%) in NNI investment, which demonstrates a particular focus on exploring emerging areas of nanotechnology in the future. Under the new program, NNI will continue to endorse innovative research that benefits people. The development of high-risk / high-reward research will also be pursued, which might contribute to great strides in technical capabilities. It is noteworthy that the United States has been facing emerging rivals in East Asia in this area over the past years and therefore needs more government investment to maintain its historic superiority.

The American nanotechnology market has been estimated at US $ 13.2 Billion in 2021, while China and Japan, as future rivals for the US, are seeking to expand their technology market. In its previous strategic plans, the United States had already set various goals and devised plans for the development of this market. Nonetheless, in the new program, the development of nanotechnology entrepreneurship community, the expansion of public-private partnership in target areas and the expansion of communication among regional innovation ecosystems to support the commercialization of nanotechnology are among the top objectives in this regard. The development of strategic cooperation between different institutions will also be defined by the NNCO Industry and the Regional Liaison (IRL) in this respect. The National Nanotechnology Coordination Office (NNCO) also has a Devoted Industry and Regional Liaison Division that communicates with and actively monitors and supports the nanotechnology business community.

8– The third goal of the program is to "provide a sustainable infrastructure to support nanotechnology research and development." Among the most important objectives of this goal in this new program is to "share nanotechnology data through databases and best practices, develop connections between user-centric facilities and research user facilities and manufacturing institutes" and to "promote training and learning opportunities for the workforce as well as the expansion of specialized infrastructures for the training of the workforce." Many universities in different US states have different centers, networks and programs for training skilled labor, which can be viewed here.

9– The fourth goal of this program is "public participation and development of nanotechnology workforce". The program focuses on students and teachers and seeks to prepare the workforce for high-quality jobs offered by nanotechnology. To this end, NNI is deploying an Education Coordinator to facilitate group activities and coordination with other federal activities. This program centers on strengthening the K12 level students’ curricula. To view resources related to this domain, check nanohub’s website. Also, under the new program, nanotechnology-related training will be expanded within the framework of the Strategic Plan for Science, Technology, Engineering and Mathematics.

10– Finally, the ultimate goal of this program is to "ensure the responsible development of nanotechnology." In this framework, raising scientific awareness about environmental, safety and health considerations of nanotechnology (nanoEHS), supporting pragmatic application of responsible nanotechnology development principles in research, development and commercialization of nanomaterials and nanotechnology-enabled products and promoting international partnerships will be pursued as the most important objectives of this section. The program also introduced a new idea under the heading of Inclusion, Diversity, Equity, and Access (IDEA) to help advance responsible development of nanotechnology, and an IDEA Liaison is selected by the NNI to facilitate the cooperation of various experts in this field. Organizations participating in NNI are also continuing their efforts to promote this IDEA. The American Science Foundation, for example, is running two programs, INCLUDES and ADVANCE, in this regard.

In the end, it should be noted that the new strategic plan has set new goals while maintaining some of the goals of the previous documents. In particular, the document introduces new mechanisms that fully support nanotechnology enterprises. Emphasis on the development of research infrastructures to train workforce of the future and strengthen communication between different institutions is one of the prime features of this document. In design, for example, nanotechnology networks across the United States play an important role in enabling and empowering the National Nanotechnology Initiative (NNI) across the United States.