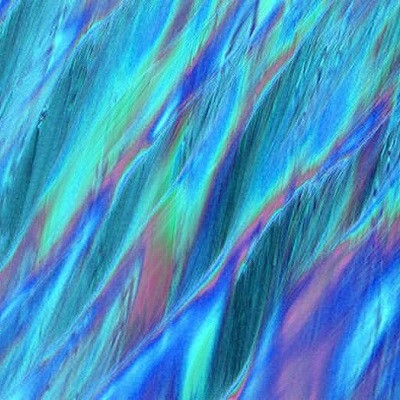 Stabilized blue phase liquid crystals, developed by researchers at the Pritzker School of Molecular Engineering (PME) at the University of Chicago, can reflect blue and green light, and can be switched on and off incredibly quickly, opening the door to faster response times in optical technologies.

Liquid crystals already provide the basis for successful technologies like LCD displays, and researchers continue to create specific kinds of liquid crystals for even better optical devices and applications.

Juan de Pablo, Liew Family Professor of Molecular Engineering at the Pritzker School of Molecular Engineering (PME) at the University of Chicago, and his team have now found a way to create and stabilize so-called “blue phase liquid crystals,” which have the properties of both liquids and crystals, and can in some cases reflect visible light better than ordinary liquid crystals.

The results, published in ACS Nano, could lead to new optical technologies with better response times.

Thanks to their uniform molecular orientation, liquid crystals are already the basis for many display technologies, including those in digital displays for computers and televisions. In this research, de Pablo and his team were interested in chiral liquid crystals, which have a certain asymmetrical “handedness”—like right-handedness or left-handedness—that allows them to exhibit a wider and more interesting range of optical behaviors.

“Now that we understand these materials and can control them, we can take advantage of their unique optical properties. The next step is deploying them in devices and sensors to demonstrate their usefulness.”

Importantly, these crystals can form blue phase crystals, which, because of their unique structure, can reflect blue and green light, and can be switched on and off incredibly quickly. But these crystals only exist in a small range of temperatures and are inherently unstable: heating them up even 1 degree can destroy their properties. That has limited their use in technologies.

Through simulation and experiments, the team was able to stabilize the blue phase crystals through the formation of so-called double emulsions. They used a small core droplet of a water-based solution surrounded by an outer droplet of an oily chiral liquid crystal, thereby creating a “core and shell” structure. That structure was itself suspended in another water-based liquid, unmixable with the liquid crystal. Over the appropriate range of temperatures, they were able to trap the chiral liquid crystal in the shell in a “blue phase” state. They then formed a polymer network within the shell, which stabilized the blue crystal without destroying its properties.

The team then showed that they could change the temperature of the blue phase crystal by 30 degrees without destroying it. Not only that, the process formed perfect, uniform blue phase crystals, which allowed the researchers to better predict and control their behavior.

“Now that we understand these materials and can control them, we can take advantage of their unique optical properties,” de Pablo said. “The next step is deploying them in devices and sensors to demonstrate their usefulness.”

Potential applications include display technologies that could be turned on and off with very small changes in size, temperature, or exposure to light, or sensors that can detect radiation within a certain wavelength.