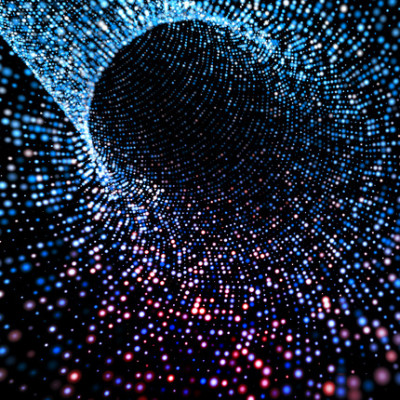 An international team has detected at HZB's vector magnet facility VEKMAG an unusual ferromagnetic property in a two-dimensional system, known as “easy-plane anisotropy”. This could foster new energy efficient information technologies based on spintronics for data storage, among other things. The team has published its results in the renowned journal Science.

The thinnest materials in the world are only a single atom thick. These kinds of two-dimensional or 2D materials – such as graphene, well-known as consisting of a single layer of carbon atoms – are causing a great deal of excitement among research teams worldwide. This is because these materials promise unusual properties that cannot be obtained using three-dimensional materials. As a result, 2D materials are opening the door to new applications in fields such as information and display technology, as well as for critical components in extremely sensitive sensors.

Structures known as van-der-Waals monolayers are arousing particular interest. These are combinations of two or more layers of different materials that are each only a single atom thick, with the layers held to one another by weak electrostatic van-der-Waals forces. By selecting the type and sequence of material layers bound in this way, specific electrical, magnetic, and optical characteristics can be chosen and modified. However, scaled-up homogeneous deposition of individual van-der-Waals layers having ferromagnetic properties has not yet been achieved. Yet it is precisely this kind of magnetism on a larger scale that is particularly important for several potential applications – such as for a novel form of non-volatile memory for example.

Scientists from the Max Planck Institute for Microstructure Physics in Halle, Germany, the ALBA synchrotron light source in Barcelona, Spain, and the Helmholtz-Zentrum Berlin have now succeeded for the first time in creating a uniform two-dimensional material – and demonstrating an exotic ferromagnetic behaviour within it known as “easy-plane” magnetism. 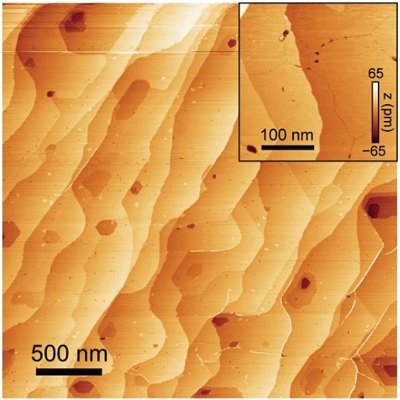 STM topography of a monolayer CrCl3 grown on Graphene/6H-SiC(0001). Inset, a magnified topography image, which reveals the grain boundaries.

A nearly free-floating layer of chromium and chlorine

The researchers from Germany and Spain utilised chromium chloride (CrCl3) as a material, which resembles the corresponding compound made of chromium and iodine in structure – but can be considerably more robust. The team in Halle deposited a macro-scale monoatomic layer of this material upon a graphene-coated silicon-carbide substrate using molecular-beam epitaxy. The purpose of the graphene was to reduce the interaction between chromium chloride and silicon carbide and thereby prevent the substrate from influencing the properties of the monoatomic CrCl3 layer. This was the key to accessing the elusive magnetic easy-plane anisotropy”, explains Dr. Amilcar Bedoya-Pinto, a researcher in Prof. Stuart Parkin’s group at the Max Planck Institute in Halle. “Essentially, we obtained an almost free-floating, ultrathin layer that was only bound to the graphene interlayer by weak van-der-Waals forces.”

The team's goal was to answer the question of how the magnetic order in chromium chloride manifests itself when it consists of only a single monoatomic layer. In its normal three-dimensional form, the substance is antiferromagnetic. As a result, the magnetic moments of the atoms are oriented in opposite directions in each layer – which makes the material appear non-magnetic in bulk. Theoretical considerations so far suggested that the magnetic ordering is lost or exhibits weak conventional magnetisation when the material is reduced to a single atomic layer.

Precise measurements at the VEKMAG facility

However, scientists have now succeeded in disproving this – by taking a detailed look at the magnetic properties of the 2D material. To do so, they used the unique capabilities of the VEKMAG vector magnet facility installed at HZB's synchrotron radiation source BESSY II. “Here it is possible to investigate samples using soft X-rays in a strong magnetic field – and at temperatures near absolute zero”, says Dr Florin Radu, head of the team at HZB responsible for operations at the VEKMAG facility. “Those aspects makes the facility unique in the world”, adds the Berlin scientist. It enabled the team members from Halle to determine the orientation of individual magnetic moments and to accurately distinguish between chromium and chlorine atoms.

During the measurements, the researchers observed how ferromagnetic order formed in the two-dimensional material below a certain temperature, what is known as the Curie temperature. “In the monoatomic chromium chloride layer, a phase transition characteristic of easy-plane magnets took place that had never been observed before in such a 2D material”, reports Bedoya-Pinto.

Tailwind for the development of spintronics

The discovery not only offers new insights into the magnetic behaviour of two-dimensional materials. “We now also have an excellent platform for exploring a variety of physical phenomena that only exist in two-dimensional magnets”, Bedoya-Pinto is pleased to say, such as superfluid (lossless) transport of spin, which is a kind of intrinsic angular momentum of electrons and other particles. These are the basis for a new form of data processing that – unlike conventional electronics – uses magnetic moments rather than electrical charges. Known as spintronics, this is currently revolutionizing data storage and information processing. The new insights gained at HZB could boost this development.