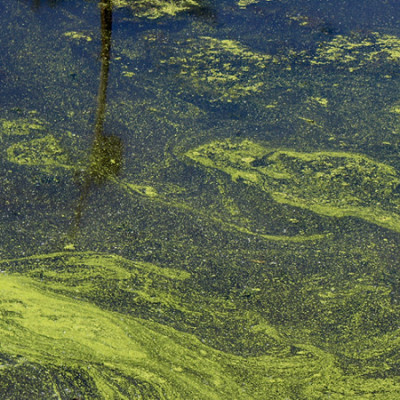 Murky green algal blooms are more than a major eyesore; they reveal that a body of water could be unsafe for swimming or drinking. Currently, however, there isn’t an effective warning system for impending blooms. Now, researchers in ACS Applied Nano Materials report an indicator that changes color when exposed to rising levels of alkaline phosphatase — an enzyme that forecasts phytoplankton’s exponential growth. This change can be detected by the naked eye or a smartphone.

A surplus of phosphorus in freshwater systems causes algae, such as phytoplankton and cyanobacteria, to grow out of control, turning the water into a “pea soup” of these organisms. Blooms can threaten drinking water supplies because some algal species release unpleasant odors or toxins. But if people knew when an algal bloom was likely to develop, they could manage it by removing or killing the algae before they become a problem. Previously, Jingjing Deng and colleagues showed that alkaline phosphatase helps release bioavailable phosphorus from complex compounds, and that rising levels of the enzyme could forecast phosphorus-related algal blooms. However, current detection methods for alkaline phosphatase aren’t very sensitive or specific. So, the researchers wanted to use the reaction catalyzed by alkaline phosphatase to induce both fluorescence and visible color changes in a water sample. 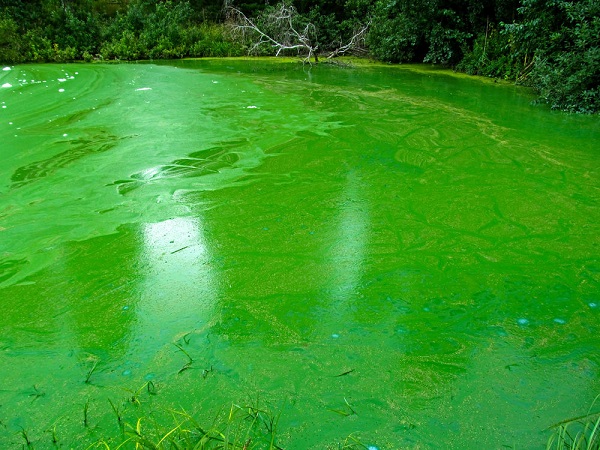 An indicator solution’s fluorescence and visible color changes could be used to predict impending algal blooms.

To make the color-changing indicator, the researchers first combined copper ions with guanosine-5-monophosphate, forming spherical nanoparticles. Next, they incorporated two compounds (1,1,2,2-tetra(4-carboxylphenyl)ethylene and sulforhodamine 101) within the nanoparticles. The final result was a deep blue solution in visible light that fluoresced a bluish-purple under UV light. In the presence of alkaline phosphatase, the solution shifted to a pinkish hue and a strong red fluorescence under UV light.

The researchers tested the indicator with water from 13 river locations that had limited bioavailable phosphorus, calculating red-to-blue fluorescence ratios with a smartphone’s color scanning app. They found that the portable digital method reliably detected alkaline phosphatase and was as robust as benchtop measurements of the indicator’s fluorescence. The researchers also grew toxin-producing cyanobacteria in the lab, feeding them complex phosphorus-containing compounds, and measured the alkaline phosphatase changes. On the third day, a large increase in enzyme activity was detected with both fluorescence and visible color changes. A few days later, the algae were growing exponentially. Because the indicator and smartphone-based system detected the activity surge prior to a bloom, the researchers say it could be developed for real-time field monitoring and prediction.