A RMIT-led, international collaboration published this week has observed large in-plane anisotropic magnetoresistance (AMR) in a quantum spin Hall insulator and the spin quantization axis of the edge states can be well-defined.

A quantum spin Hall insulator (QSHIs) is a two-dimensional state of matter with an insulating bulk and non-dissipative helical edge states that display spin-momentum locking, which are promising options for developing future low-energy nano-electronic and spintronic devices.

The FLEET collaboration of researchers at RMIT, UNSW, and South China Normal University confirm for the first time the existence of large in-plane AMR in monolayer WTe2 which is a novel QSHI with higher critical temperatures.

By allowing electrical conduction without wasted dissipation of energy, such materials could form the basis of a new future generation of ultra-low energy electronics.

The rise of topological insulators has offered significant hope for researchers seeking non-dissipative transport, and thus a solution to the already observed plateauing of Moore’s law. 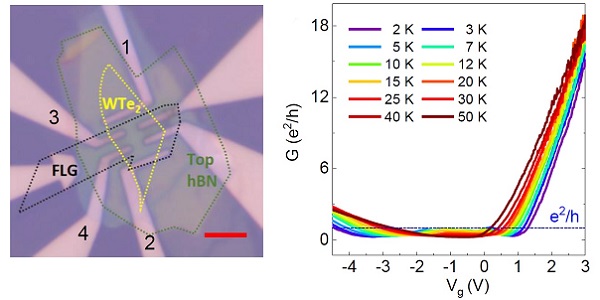 “Although we had gained much experience in stacking van der Waals (vdW) heterostructures, fabricating monolayer vdW devices was still challenging for us,” the study’s first author Dr Cheng Tan says.

“Because monolayer WTe2 nanoflakes are difficult to obtain, we firstly focused on a more mature material, graphene, to develop the best way for fabricating monolayer WTe2 vdW devices” says Cheng, who is a FLEET Research Fellow at RMIT University in Melbourne.

As the monolayer WTe2 nanoflakes are also very sensitive to the air, protective ‘suits of amours’ made of inert hBN nanoflakes should be utilized to encapsulate them. Additional, the assembly was carried out in an oxygen- and water-free glove box before series of tests outside. After some effort, the team then successfully fabricated the monolayer WTe2 devices with gate electrodes and observed typical transport behaviours of gated monolayer WTe2.

“For materials to be used in future spintronic devices, we need a method to determine spin characteristics, in particular the direction of spin,” says Dr Guolin Zheng (also at RMIT).

“However, in monolayer WTe2, spin-momentum locking (an essential property of QSHI) and whether spin quantization axis in its helical edge states could be determined had yet to be experimentally demonstrated.”

Anisotropic magnetoresistance (AMR) is an effective transport measurement method to reveal the relationship between the electrons’ spin and momentum when the current is spin-polarized.

“Fortunately, we found the proper method to deal with the monolayer WTe2 nanoflakes,” says co-author Dr Feixiang Xiang (UNSW). “So then we performed angular-dependent transport measurements to explore the potential spin features in the edge states.”

However, the topological edge states are not the only possible cause for spin-momentum locking and in-plane AMR effects in a QSHI.  Rashba splitting could also generate similar effects, which may make the experimental results unclear.

“Most of the samples show that minimum of in-plane AMR happens when the magnetic field is nearly perpendicular to the edge current direction.” says Cheng.

Further theoretical calculations by collaborators at South China Normal University further confirmed that electrons’ spins in the edge states of monolayer WTe2 should be always perpendicular to their propagation directions, so-called ‘spin-momentum locking’.

“The amplitudes of the in-plane AMR observed in monolayer WTe2 is very large, up to 22%” says co-author A/Prof Lan Wang (also at RMIT).

“While the previous amplitudes of in-plane AMR in other 3D topological insulators are only around 1%. By AMR measurements, we can also precisely determine the spin quantization axis of the spin polarized electrons in the edge states.” 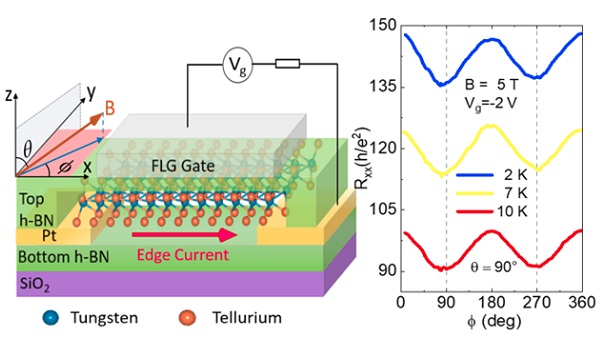 When monolayer WTe2 device (left) is tilted in in-plane direction, AMR (right) varies by angle of tilt, shown at varying magnetic field, and reaches a minimal value when the magnetic field is perpendicular to the edge current direction.