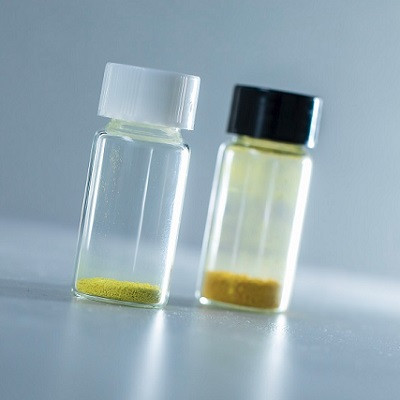 Green hydrogen production from solar water splitting has attracted a great deal of interest in recent years because hydrogen is a fuel of high energy density. A research team co-led by scholars from City University of Hong Kong (CityU) and Germany discovered the quantum confinement effect in a photocatalyst of a 3D-ordered macroporous structure. The quantum confinement effect was found to enable hydrogen production under visible light. The findings offer an option for addressing energy and environmental challenges. 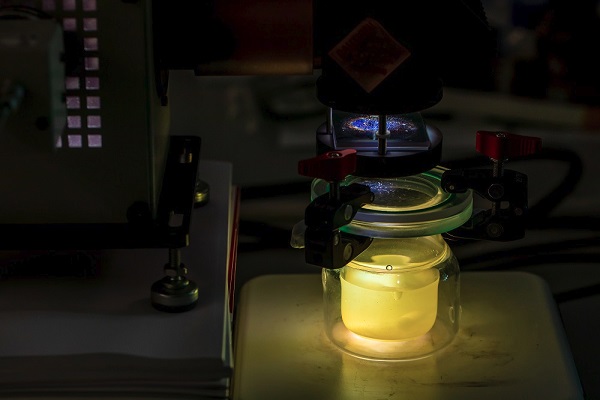 The City University of Hong Kong research team used this photocatalytic reactor to do experiments on the hydrogen-producing photocatalyst.

BiVO4 in a 3D-ordered macroporous (3DOM) structure has received considerable attention owing to its superior performance. The improved photocatalytic activities of this structure are often attributed to the larger surface area, high light absorption, and suppressed charge recombination.

However, there were no systematic studies that correlate the influence of the charge transport of highly ordered porous nanostructure on photoactivity. Dr Ng and his team took on this challenge and investigated the distinct carrier dynamics of 3DOM and plate-like BiVO4 samples, as well as their efficiency in photocatalysis.

The team discovered that in the water-splitting process under visible light, the amount of oxygen produced by the 3DOM BiVO4 photocatalyst is almost two times that produced by the plate-like BiVO4 . Furthermore, the 3DOM BiVO4 photocatalyst exhibited higher anodic photocurrent density than the plate-like form. Therefore, 3DOM BiVO4 has higher photocatalysis efficiency. “To our surprise, BiVO4, originally an oxygen-producing photocatalyst, also produced hydrogen during water splitting under visible light when it was in the 3DOM structure. This had never previously been reported,” said Dr Ng.

Figure a shows a scanning electron microscope image of the 3DOM BiVO4 sample; Figure b is a plate-like sample.

How can BiVO4 in a 3DOM structure produce hydrogen? Dr Wu Hao, the first author of the paper, who is the energy stream leader in Dr Ng’s laboratory, shared one of the highlights of this study. “We discovered that quantum confinement arising from the ultrathin, crystalline wall of 3DOM BiVO4 raised its conduction band. It enables photocatalytic proton reduction to hydrogen under visible-light illumination, allowing hydrogen to be generated from water splitting.” Quantum confinement refers to changes in electronic and optical properties such as energy levels and band gaps when the size of the material is reduced to nanoscale. 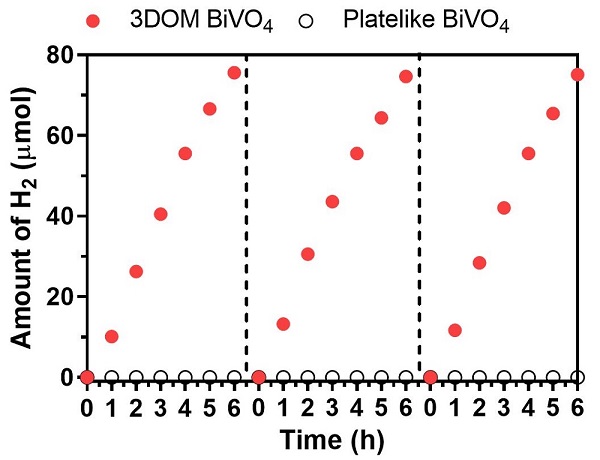 The research team also discovered that even without using a co-catalyst, 3DOM BiVO4 can still produce hydrogen from solutions under visible-light illumination, while the plate-like BiVO4 showed only negligible hydrogen production. A co-catalyst is a substance that facilitates the function of a catalyst. It can provide accumulating sites for photo-generated charges and promote charge separation.
The team also applied advanced techniques, including time-resolved microwave conductivity, to investigate BiVO4 photocatalyst in 3DOM and plate-like structures. They discovered that compared with the plate-like structure, 3DOM BiVO4 has about six times higher charge mobility, about 18 times longer charge carrier lifetime, and about nine times longer effective diffusion length, thus enhancing the efficiency of photocatalysis.

The next goal of Dr Ng and his team is to split wastewater and explore methods to scale up photocatalytic systems. “Hydrogen produced from solar water splitting is a green process without any carbon emissions,” said Dr Ng. “Hydrogen can be used for industrial purposes and in fuel cells for electricity. We expect this technology to have a wider application in the future, as there is high demand for producing hydrogen from green resources.”