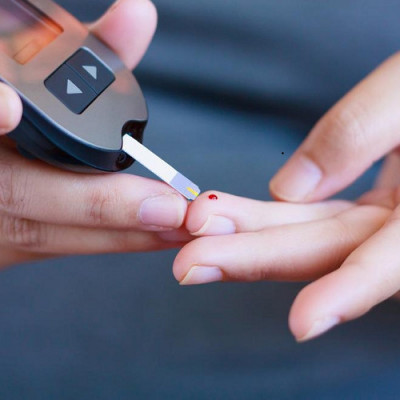 More than 10% of the US population is currently living with diabetes. Every day, over 34,000 Americans must collect daily blood samples to check their blood glucose levels. Because no non-invasive glucose monitoring device is currently commercially available, people living with diabetes face daily invasive testing, which is subject to a degree of inaccuracy and the inconvenience of having to draw blood once or several times daily.

Continuous glucose monitoring (CGM) systems were introduced in the 2000s to overcome some of the problems associated with finger-prick glucose monitoring systems; however, these required sensors to be embedded under the skin to take measurements.

Now, new research has established wearable devices that rely on graphene to non-invasively collect data on blood glucose levels. A new startup, GraphWear, recently revised $20.5 million to develop this technology, creating a needle-free CGM device using nanotechnology. The hope is that this will help non-invasive glucose monitoring become the norm.

The total number of people living with diabetes around the world is rising. In 1980, roughly 108 million were living with the disease, compared with 422 million in 2014. The incidence of diabetes has been growing most rapidly in low- and middle-income countries.

Without sufficient treatment and monitoring, diabetes can cause several severe and sometimes fatal health conditions. Globally, diabetes is a significant cause of blindness, heart attacks, kidney failure, stroke, and lower limb amputation.

Deaths attributed to diabetes are also rising, with rates of premature mortality from diabetes rising by 5% between 2000 and 2016. In 2019, 1.5 million deaths were determined to be a direct result of diabetes.

Co-founders of San Francisco-based startup, GraphWear, aim to establish a non-invasive method of CGM with the help of nanotechnology. It will use the $20.5 it successfully raised to further develop its nanotech-based technology and conduct more trials to test and enhance its device, ready for regulatory submission.

Currently, around half of Americans with Type 1 diabetes use CGM systems, although the global proportion of users is much lower. GraphWear intends to increase the percentage of CGM users by making the technology more accessible, reducing the impact on wearers by collecting data non-invasively for the first time.

CGM technology that is already on the market involves taking measurements from the interstitial fluid that flows just beneath the skin, meaning that sensors must be implanted under the skin to take readings.

Now, a new technology developed by GraphWear overcomes this limitation with its innovative sensor that draws glucose molecules close to the skin’s surface to be easily detected non-invasively.

GraphWear’s new technology intends to replace current commercially available devices and increase the quality of life for those diagnosed with diabetes.

The nanotechnology device is placed on the wrist or the abdomen and communicates readings to the wearer’s smartphone to instantly alert the wearer when their blood glucose levels need to be addressed (e.g. too high or low).

While several other startups have also been developing nanotechnology-based CGM devices, the technology remains in its early stages as scientists address challenges such as lag times, precision, and optimizing patient use.

GraphWear’s new technology has the potential to be a game-changer, offering millions living with diabetes a drastically improved option to monitoring their disease. As a result, the incidence of diabetes-related health complications as well as diabetes-related mortality rates may reduce.

For example, in October 2021, scientists at Penn State University published their research findings in the journal Biosensors and Bioelectronics, outlining how they had deposited nickel onto laser-induced graphene (LIG) to create a material that is both sensitive to glucose and has high electrical conductivity and a rapid fabrication time of mere seconds.

Researchers developed this material into a device sensitive enough to detect glucose concentrations in the sweat on the skin’s surface.

As a result, disease monitoring for diabetes may improve, which may lead to better disease outcomes. Further research and development are needed before such devices are ready to pass regulatory checks and become commercially available. With the number of people living with diabetes increasing globally, these devices will likely be vitally important in reducing the impact on health services in the coming years.