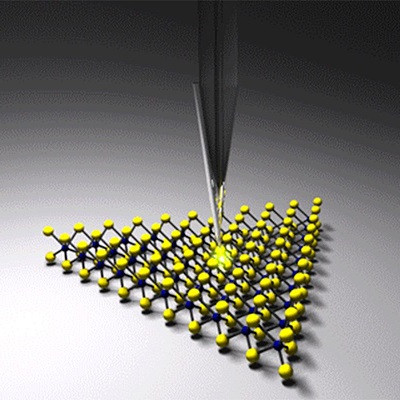 It's one thing to produce nanoscale devices, but it's another to study and improve on them — they're so small they can't reflect enough light to get a good look. A breakthrough might make that possible, however. UC Riverside researchers have built technology that squeezes tungsten lamp light into a 6-nanometer spot at the end of a silver nanowire. That lets scientists produce color imaging at an "unprecedented" level, rather than having to settle for molecular vibrations.

The developers modified an existing "superfocusing" tool (already used to measure vibrations) to detect signals across the entire visible spectrum. Light travels in a flashlight-like conical path. When the nanowire's tip passes over an object, the system records that item's influence on the beam shape and color (including through a spectrometer). With two pieces of specrtra for every 6nm pixel, the team can create color photos of carbon nanotubes that would otherwise appear gray.

This ability to compress light is notable by itself, but the inventors see it playing an important role in nanotechnology. Semiconductor producers could develop more uniform nanomaterials that find their way into chips and other densely-packed devices. The squeezed light could also improve humanity's understanding of nanoelectronics, quantum optics and other scientific fields where this resolution hasn't been available.