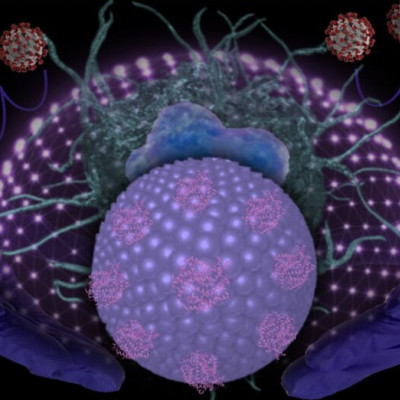 A research team led by scientists at UC Riverside and UCLA has engineered novel nanoparticles to serve as “molecular traps” to target SARS-CoV-2, the virus that spreads COVID-19. The traps bind to SARS-CoV-2 and prevent it from attacking macrophages — white blood cell that surround and kill microorganisms.

“These nanoparticles can help maintain white blood cells’ regular function to combat virus infection,” said Changcheng Zhou, a professor of biomedical sciences in the UCR School of Medicine, who co-led the research with Tzung K. Hsiai, a professor of medicine and bioengineering at UCLA.

Zhou explained that macrophages serve as frontline immune cells in response to SARS-CoV-2 infection by recognizing and swallowing up viruses. These cells also produce cytokines, the production of which is an important part of the body’s immune response but can become out of control. The virus-induced cytokine storm — the flooding by the immune system of the bloodstream with inflammatory proteins called cytokines — that follows an infection can kill tissue and damage organs. Zhou said inflamed macrophages are capable of infiltrating different tissues to cause adverse effects associated with COVID-19, such as myocarditis or heart inflammation.

“Our findings can potentially be used to treat COVID-19-associated diseases, including heart disease,” he said. “In addition to lung inflammation or injury, approximately 15% of COVID-19 patients with pre-existing conditions may develop acute cardiac arrhythmia and myocarditis, and macrophages may play an important role in this process.”

Mechanisms underlying SARS-CoV-2-mediated macrophage dysfunctions are not entirely known to scientists. According to Zhou, this is because many immune cells, including macrophages, express low levels of human ACE2, or hACE2, the receptor for SARS-CoV-2.

“Previous studies in this line of work have mainly focused on hACE2-dependent mechanisms,” he said. “Our results, on the other hand, suggest that SARS-CoV-2 can hijack macrophages and induce inflammatory responses even without hACE2.”

Zhou and his team explored neutralizing SARS-CoV-2 with liposome particles — molecules that can be used to carry drugs or other substances into tissues — as an innovative therapeutic strategy for treating COVID-19-associated diseases. The team used nanoparticles to engineer “Liposome-hACE2” for use as a decoy.

“The SARS-CoV-2 virus binds to hACE2 on the surface of the liposomes instead of immune cells, preventing it from leading to macrophage-mediated inflammation,” Zhou said. “It is also possible that Liposome-hACE2, with or without SARS-CoV-2 binding, can be internalized by macrophages, which can inhibit SARS-CoV-2 viral particle replication. This contributes to decreased inflammatory responses.”

The analyses were done on macrophages in humans and mice. In murine tissue, the researchers found the molecular traps inhibited SARS-CoV-2 Spike protein-induced macrophage infiltration in the lung and heart, thereby suppressing lung and cardiac inflammation. The team also found that the Spike protein stimulated inflammation by activating a signaling pathway called NF-κB.

The research was funded in part by the American Heart Association and the National Heart, Lung, and Blood Institute.

Zhou and Hsiai were joined in the research by Sandro Satta and Susana Cavallero at UCLA; Zhaojie Meng and Rebecca Hernandez at UCR; and Tong Zhou at the University of Nevada, Reno. Satta and Meng contributed equally to the work. Hernandez was supported by a training grant from the National Institute of Environmental Health Sciences.