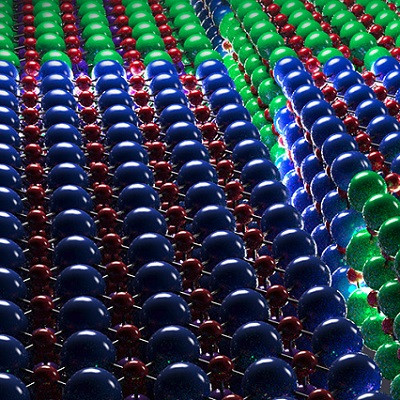 A hundred years of physics tells us that collective atomic vibrations, called phonons, can behave like particles or waves. When they hit an interface between two materials, they can bounce off like a tennis ball. If the materials are thin and repeating, as in a superlattice, the phonons can jump between successive materials.

Now there is definitive, experimental proof that at the nanoscale, the notion of multiple thin materials with distinct vibrations no longer holds. If the materials are thin, their atoms arrange identically, so that their vibrations are similar and present everywhere. Such structural and vibrational coherency opens new avenues in materials design, which will lead to more energy efficient, low-power devices, novel material solutions to recycle and convert waste heat to electricity, and new ways to manipulate light with heat for advanced computing to power 6G wireless communication.

The discovery emerged from a long-term collaboration of scientists and engineers at seven universities and two U.S. Department of Energy national laboratories. Their paper, Emergent Interface Vibrational Structure of Oxide Superlattices, was published January 26 in Nature.

ERIC HOGLUND, a postdoctoral researcher at the University of Virginia School of Engineering and Applied Science, took point for the team. He earned his Ph.D. in materials science and engineering from UVA in May 2020 working with JAMES M. HOWE, Thomas Goodwin Digges Professor of materials science and engineering. After graduation, Hoglund continued working as a post-doctoral researcher with support from Howe and PATRICK HOPKINS, Whitney Stone Professor and professor of mechanical and aerospace engineering.

“The ability to visualize atomic vibrations and link them to functional properties and new device concepts, enabled by collaboration and co-advising in materials science and mechanical engineering, advances MMI’s mission,” Hopkins said.

“You can achieve desired material properties by changing how different oxides couple to each other, how many times the oxides are layered and the thickness of each layer,” Hoglund said.

Hopkins expected the phonon to get resistance as it traveled through the lattice network, dissipating thermal energy at each interface of the oxide layers. Instead, thermal conductivity went up when the interfaces were really close together.

“This led us to believe that phonons can form a wave that exists across all subsequent materials, also known as a coherent effect,” Hopkins said. “We came up with an explanation that fit the conductivity measurements, but always felt this work was incomplete.”

“It turns out, when the interfaces become very close, the atomic arrangements unique to the material layer cease to exist,” Hoglund said. “The atom positions at the interfaces, and their vibrations, exist everywhere. This explains why nanoscale-spaced interfaces produce unique properties, different from a linear mixture of the adjoining materials.”

Hoglund collaborated with J. Hachtel, an R&D associate in the Center for Nanophase Materials Sciences at Oak Ridge National Laboratory, to connect local atomic structure to vibrations using new generations of electron microscopes at UVA and Oak Ridge. Working with high-spatial-resolution spectroscopic data, they mapped interlayer vibrations across interfaces in a superlattice.

“That’s the major advance of the Nature paper,” Hopkins said. “We can see the position of atoms and their vibrations, this beautiful image of a phonon wave based on a certain pattern or type of atomic structure."

The Collaborative Trek to Collective Success

The highly collaborative effort began in 2018 when Hoglund was sharing research plans to characterize atomic vibrations at interfaces in perovskite oxides.

“I was going to Oak Ridge to work with J. Hachtel for a week, so Jim and Patrick suggested I take the superlattice samples and just see what we can see,” Hoglund recalled. “The experiments that J. Hachtel and I did at Oak Ridge boosted our confidence in using superlattices to measure vibrations at the atomic or nano-scale.”

From these experiments, Hoglund deduced that the properties he cared about — thermal transport and infrared response — stemmed from the interface’s influence on the superlattice’s well-ordered framework of oxygen atoms. The oxygen atoms arrange themselves in an eight-sided structure called an octahedra, with a metal atom suspended inside. The interaction between oxygen and metal atoms causes the octahedra to rotate across the material structure. The oxygen and metal arrangements in this framework generate the unique vibrations and give rise to the material’s thermal and spectral properties.

Back at UVA, Hoglund’s chance conversation with JON IHLEFELD, associate professor of materials science and engineering and electrical and computer engineering, brought additional members and expertise to the effort. Ihlefeld mentioned that researchers affiliated with Sandia National Laboratories, Thomas Beechem, associate professor of mechanical engineering at Purdue University, and Zachary T. Piontkowski, a senior member of Sandia’s technical staff, were also trying to explain the optical behavior of phonons and had likewise found the exact same oxide superlattices to be an ideal material for their study.

Coincidentally, Hopkins had an ongoing research collaboration with Beechem, albeit with other material systems. “Rather than competing, we agreed to work together and make this something bigger than either of us,” Hoglund said.

Beechem’s involvement had an added benefit, bringing Penn State physicist and materials scientist Roman Engel-Herbert and his student Ryan C. Haisimaier into the partnership to grow material samples for the microscopy experiments underway at UVA, Oak Ridge and Vanderbilt. Up to this point, Ramamoorthy Ramesh, University of California, Berkeley, professor of physics and materials science and engineering, and his Ph.D. students Ajay K. Yadav and Jayakanth Ravichandran were the growers on the team, providing samples to Hopkins’ ExSiTE research group.

“We realized we had all of this really neat experimental data connecting vibrations at atomic and macroscopic length scales, but all of our explanations were still somewhat conjectures that we could not prove absolutely without theory,” Hoglund said.

Their theoretical and computational methods supported exactly the results produced by Hoglund and other experimentalists on the team. The simulation also enabled the experimentalists to understand how every atom in the superlattice vibrates with high precision and how this was related to structure.

At this point, the team had 17 authors: three microscopists, four optical spectroscopists, three computational scientists, five growers and two material scientists. It was time, they thought, to share their findings with the scientific community at large.

An initial peer reviewer of their manuscript advised the team to establish a more direct, causal connection between material structure and material properties. “We measured some cool new phenomena making connections over multiple length scales that should affect material properties, but we had not yet convincingly demonstrated whether and how the known properties changed,” Hoglund said. 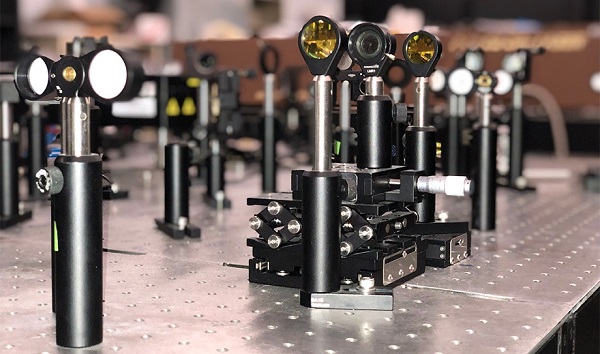 “When you send in a photon of one unit of energy, the superlattices double that unit of energy,” Hopkins said. “John and Sara built a new capability in our lab to measure this effect, which we express as the second harmonic generation efficiency of these superlattices.” Their contribution expands the ExSiTE lab capabilities to understand new light-phonon interactions.

“I think this will enable advanced materials discovery,” Hopkins said. “Scientists and engineers working with other classes of materials may now look for similar properties in their own studies. I fully expect we will find that these phonon waves, this coherent effect, exists in a lot of other materials.”

The long-standing collaboration continues. Hoglund is in his second year as a postdoctoral researcher, working with both Howe and Hopkins. Together with Pantelides, Hachtel and Ramesh, he expects they will have new and exciting atomic structure-vibration ideas to share in the near future.

Read the original article on University of Virginia.