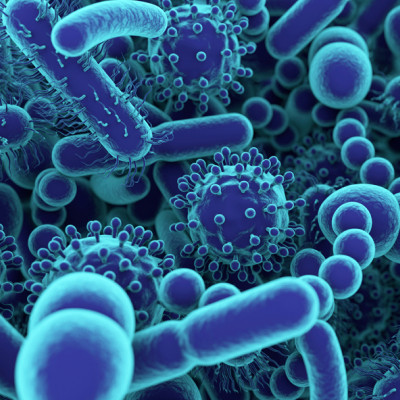 When vulnerable people develop life-threatening infections in hospitals, time is the crucial factor for survival. Researchers are therefore working intensively to find more rapid and safer methods for detecting bacterial pathogens. Graphene is considered to be an especially suitable material for use in biosensors and diagnostic devices. A research group has now shown that the two-dimensional sheet structure of graphene can very rapidly distinguish between types of bacteria. The aim is to make the sensors sensitive enough.

Sepsis, which accounts for one in five deaths globally, is a strong immune response and circulatory collapse that infection can cause. Sepsis is especially serious for people who develop it in a hospital, and 30 per cent die because too much time elapses between determining which microorganism caused it and quickly applying effective treatment. Currently this takes hours, but developments within sensor technology might shorten this time markedly.

Rapid and safer methods for detecting life-threatening infections in hospitals, such as sepsis, is crucial for the patients' survival. Professor Ivan Mijakovic and Santosh Pandit at the Department of Biology and Biological Engineering are developing a graphene-based sensor to rapidly distinguish between types of bacteria.

"We developed a simple prototype sensor comprising pristine graphene. We measured tiny changes in the electrical resistance of the material and could thereby differentiate types of bacteria. The prototype demonstrates how graphene can quickly and easily distinguish two types of bacteria. We are now striving to find the properties that characterise the bacteria that most frequently cause sepsis in the healthcare system. Based on that, we will modify the graphene sensors so that they can become sensitive enough to help in a hospital setting," explains Ivan Mijakovic, Professor at Chalmers and the Novo Nordisk Foundation Center for Biosustainability, Technical University of Denmark.

Interest in developing biosensors to detect pathogenic bacteria and viruses is growing rapidly. Among nanomaterials, graphene is gaining attention because of its special surface properties and electrical conductivity, which enable extremely small and sensitive sensors. Graphene is a two-dimensional sheet of carbon atoms arranged into a honeycomb lattice, which provides a large and very sensitive surface area.

"The carbon atoms have a sphere of electrons above and below the ultra-thin carbon layer. By attaching electrodes at opposite ends, we can measure electrical resistance, making the surface sensitive to anything in the vicinity. In our new study, we show – to our own great surprise – that graphene is so sensitive that we can not only detect whether bacteria are present through small shifts in the electrical charge but also differentiate between different types of bacteria to some extent," says Ivan Mijakovic.

Bacteria typically range in size from 0.5 to 5 µm, and have distinct shapes – spherical, rod-shaped and spiral. In addition, most bacteria are encapsulated by a cell wall comprising a peptidoglycan made of negatively charged N-acetylglucosamine and N-acetylmuramic acid. This layer is thicker in gram-positive bacteria and thinner in gram-negative bacteria.

"This is mainly a prototype to demonstrate the potential of this type of sensor. Without altering anything at the graphene surface, we can therefore detect whether bacteria are present and distinguish their small differences in surface. Naturally, this type of sensor may be useful on surfaces that must be kept completely bacteria-free, such as implants, but our prototype is more a proof of concept that the technology is possible. Now we can take the concept a step further," explains Santosh Pandit, researcher at Chalmers and the lead author of the study.

The study is p​art of a major European project

The prototype study is therefore only the first step in a major European project aiming to develop sensors that can quickly and accurately identify the pathogenic bacteria that currently pose the greatest problem in healthcare.

"The human body has thousands of species of bacteria, most of which are actually harmless or often beneficial. We therefore must be able to differentiate between them and thus we need to determine how to functionalise the graphene surface with antibodies or other receptors that are selective to specific bacteria," says Santosh Pandit.

The researchers in this international project are therefore collaborating with hospitals to collect the most relevant and problematic pathogens.

"We then 'shave' the surface of these bacteria to reveal which proteins and biomarkers characterise the pathogens. We can then either create antibodies against the peptides or build small, organic chemical receptors for these surface molecules, as we are doing in collaboration with Nina Kann, Professor in Organic Chemistry at Chalmers," explains Santosh Pandit.

The researchers hope that they can use these diverse types of strategies to further develop the prototype version of the graphene sensor into far more advanced chips.

"Hospitals are looking for a device that is both very specific and very rapid. If this technology succeeds, we would be able to reduce the response time from hours to perhaps minutes so that doctors can respond faster and thus save more lives. The initial target is therefore the bacteria that cause sepsis in hospitals and thus threaten the lives of the most compromised people, but once we have the technology fully developed, we also aim to use it for less urgent applications such as chronic infections or in implants," concludes Ivan Mijakovic.

Read the original article on Chalmers University of Technology.