Taking a Look at Tiny Bubbles 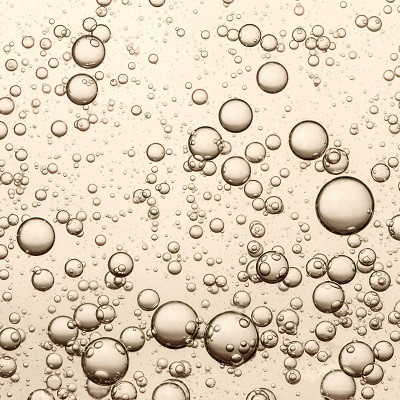 The formation and collapse of microscopic bubbles is important in a wide range of fields as both a potential mechanism behind tissue damage, such as in cases of blast-wave-induced traumatic brain injury, and as a useful tool for technology applications, such as mechanical properties evaluation, nanomaterials manipulation and surface cleaning.

Nanobubbles have been of particular interest in these areas because despite the small amount of energy needed for formation, their extreme localization opens up the potential for outsized impacts. However, understanding of the dynamic response in such small-scale bubbles has been limited by the experimental challenges associated with probing down to the nanoscale.

“While sequential optical imaging (i.e., recording movies) has contributed significantly to our understanding of cavitation and other complex bubble behavior at the larger (10s of micrometer to millimeter) scale, the necessary length and temporal resolutions make such a traditional approach infeasible for nanobubbles,” said LLNL materials scientist Garth Egan, lead author of a paper appearing in Nano Letters. 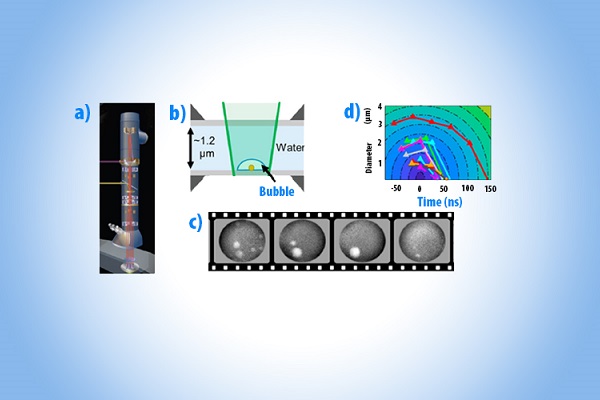 LLNL researchers combined a unique a) Dynamic Transmission Electron Microscope with b) a liquid cell to produce the first ever c) time resolved images of d) nanoscale bubble dynamics.

In the past, single-shot optical imaging, with short laser pulses used to illuminate the bubble at set times relative to bubble initiation, has been applied to achieve the requisite temporal resolution. However, fundamental limits to the spatial resolution of optical microscopy restrict the practicality of this approach when bubbles reach the nanoscale and the single image nature limits its usefulness for complex and non-repeatable interactions.

Isolated bubbles were observed to behave consistently with models derived from data from much larger bubbles. The formation and collapse were observed to be temporally asymmetric, which has implications for how results from alternate methods of experimental analysis are interpreted. More complex interactions between adjacent bubbles also were observed, which led to bubbles living longer than expected and rebounding upon collapse.