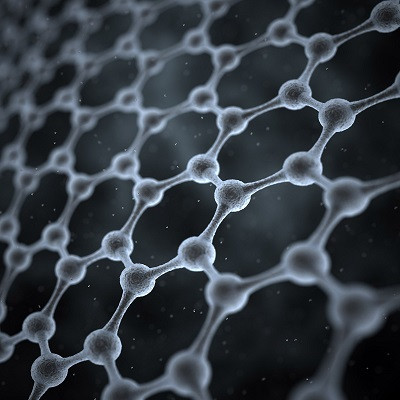 Princeton scientists are using innovative techniques to visualize electrons in graphene, a single atomic layer of carbon atoms. They are finding that strong interactions between electrons in high magnetic fields drive them to form unusual crystal-like structures similar to those first recognized for benzene molecules in the 1860s by chemist August Kekulé. These crystals exhibit a spatial periodicity that corresponds to electrons being in a quantum superposition.

The experiments also show the Kekulé quantum crystals have defects that have no analog to those of ordinary crystals made up of atoms. These findings shed light on the complex quantum phases electrons can form because of their interaction, which underlies a wide range of phenomena in many materials.

Physicists learned to control how electrons interact with one another through the application of a strong magnetic field and, most recently, by stacking multiple layers of graphene on top of each other. In fact, the discovery of graphene in the first decade of the 21st century — a discovery that led to a Nobel Prize in physics in 2010 — opened a new arena for exploring the physics of electrons, especially for examining how electrons behave collectively.

Now, Princeton researchers led by Ali Yazdani, the Class of 1909 Professor of Physics and director of the Center for Complex Materials at Princeton University, have discovered that the strong interaction between electrons in graphene drives them to form crystal structures with complex patterns determined by quantum superposition — electrons residing at multiple atomic sites at the same time. The experiment, recently published in Science, also shows that this novel quantum crystal hosts exotic deformations that correspond to the twisting and winding of the electrons’ wavefunction.

Princeton researchers led by Ali Yazdani, the Class of 1909 Professor of Physics and director of the Center for Complex Materials at Princeton University, have discovered that the strong interaction between electrons in graphene drives them to form crystal structures with complex patterns determined by quantum superposition — electrons residing at multiple atomic sites at the same time.

Graphene consists of a single layer of carbon atoms arranged in a two-dimensional hexagonal, or honeycomb-like, lattice. It is produced in a deceptively simple but painstaking manner. Graphite, the same material found in pencils, is progressively exfoliated strip by strip until this single-atom-thin layer of carbon is reached.

“Previous studies have shown that graphene demonstrates novel electrical properties,” Yazdani said. “But never before have researchers been able to peer so deeply and with such spatial resolution into the nature of quantum states.”

To achieve this unparalleled level of resolution, Yazdani’s group used a device called a scanning tunneling microscope (STM). This device relies on a phenomenon called “quantum tunneling,” where voltage is used to funnel electrons between the sharp metallic tip of the microscope and the sample only a few ångströms away. The microscope uses this tunneling current rather than light to view the world of electrons on the atomic scale. Yazdani’s microscopes operate in a very high vacuum to keep the sample surface clean and at very low temperatures to allow for high resolution measurements, unperturbed by thermal agitation.

The microscope is also able to view electrons as they reach their lowest energy states dominated by their quantum properties.

In the presence of a magnetic field, the microscope can be used to determine the spatial structure of the quantized energy level.

Quantization of energy refers to the creation of discrete values of energy, without any intermediate values, which is a characteristic of quantum physics, as opposed to classical physics, where continuous energy values is permitted.

The researchers focused their attention on the quantized level with the lowest energy in graphene, for which previous research first reported by Phuan Ong, Eugene Higgins Professor of Physics at Princeton, had revealed some unusual electrical properties. This level dominates the electrical properties when there are no excess charges added or removed from graphene — in other words, when the charge is neutral. Ong had shown that electrons “freeze” when the charge is neutral, and the graphene layer acts as an insulator with the application of a magnetic field. The nature of this frozen state of electrons in graphene has been a mystery for almost a decade, since Ong’s initial discovery.

“The insulating state that we found puzzled everyone and strongly challenged the prevailing theories at that time,” said Ong, who was not involved in the current research. “It remained an enduring puzzle for 13 years until the beautiful results obtained by Yazdani. The new results resolve the puzzle in a very exciting fashion.”

Yazdani and his team used the microscope to map the wavefunction of the lowest quantized energy level in the presence of a magnetic field. The researchers found complex patterns of electron waves when graphene was tuned to a neutral state with a nearby electrical gate.

In metals, electrons’ wavefunction are spread throughout the crystal, while in a normal insulator, electrons are frozen without any particular preference to the crystal structure of the atomic sites. At very low fields, STM images showed electron wavefunctions of graphene choosing one of the sub-lattice sites over the other. More importantly, by increasing the magnetic field, a remarkable bond-like pattern is observed, which corresponds to electrons’ wavefunction residing in a quantum superposition. This means that an electron occupies the two inequivalent sites at the same time.

In particular, the image corresponded to the bond-like structure first recognized by Kekulé for benzene. This consists of alternating single and double bonds. In a single bond, one electron from each atom binds with its neighbor electron; in a double bond, two electrons from each atom participate.

People have speculated that electrons may form such Kekulé patterns,” said Yazdani, “but now we’re seeing it for the first time. One couldn’t distinguish this state of electrons any other way unless it is imaged.”

The researchers then used the microscope to map the uniformity of the Kekulé crystal and its properties near imperfections, or defects in the graphene. One remarkable finding they made was near charge defects where they found the Kekulé pattern to evolve continuously in its patterns around the defect on the graphene surface.

Teaming up with Michael Zaletel of the University of California, Berkeley, the team developed a method for extracting from the STM data the mathematical properties of the quantum wavefunction of electrons, so-called phase angles describing their quantum superposition. The analysis revealed remarkable winding of one of these phase angles around the defect and correlated changes in the other angle.

"When the group applied their technique to measure the phase-angle above a defect in the substrate, they found a ‘vortex’ in the Kekulé pattern, which is like a hurricane around which the phase-angle winds around by 12 hours [as on a clock],” said Zaletel. “When making predictions about such quantum, nanoscale, objects, you rarely think you’ll have the pleasure to really ‘see’ a picture of them, but the group has been able to do just that." 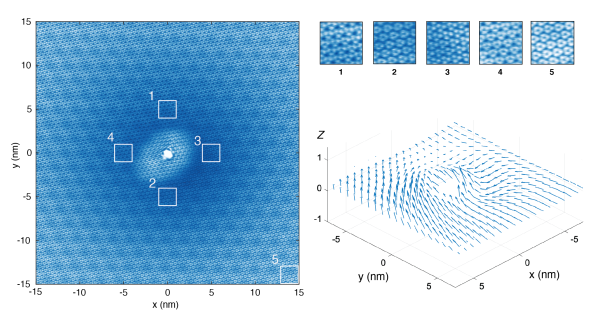 The team believes that the techniques they have developed to uncover this unusual quantum crystal of electrons in a strong magnetic field can have applications elsewhere in the field. Other two-dimensional materials and their stack can exhibit similar quantum crystals with novel defects. The team aims to apply their methodology to a wider class of such materials.