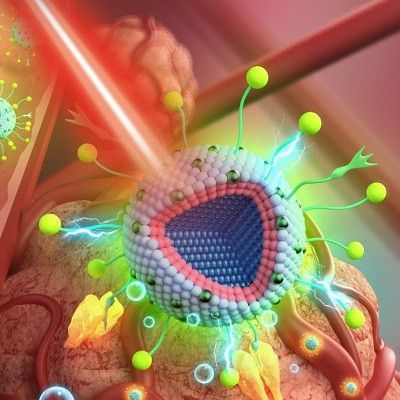 Researchers Dr Yansong Feng and Prof. Hong Zhang at the Van 't Hoff Institute for Molecular Sciences at the University of Amsterdam (UvA) have designed and synthesized novel multi-layered, multi-functional nanoparticles that enable a combination of radiotherapy and photodynamic therapy for deep cancer tissue. An initial pre-clinical evaluation of the particles has demonstrated their therapeutic potential. A patent is pending, and the university is now seeking partners for further development or licensing.

The novelty of the nanoparticles is that they enable radiotherapy and photodynamic therapy to be combined while using only X-rays. The particles also facilitate imaging of deep tissue, allowing for the image-guided targeting of the combined therapy.

In photodynamic therapy, visible light is used to activate photosensitizers that release radical oxygen species to destroy cancer cells. It attacks different parts of a cancer cell compared to conventional radiotherapy using X-rays. The combined use of both therapies enhances the destruction of tumorous tissue and often reduces the required X-ray dose. However, because photodynamic therapy is triggered by light, it is difficult to use it to treat cancer tissue located deep inside the body. To do so requires an invasive procedure such as endoscopy using an optical fibre. With X-rays there's no such problem. They easily penetrate the body and are focused in such a way that they can do their devastating work at the tumour site.

By designing nanoparticles that are able to emit visible light upon radiation with X-rays, the UvA researchers have now found a way to apply photodynamic therapy at deep locations without invasive procedures. The particles were developed during the PhD research of Dr Yansong Feng, supervised by Prof. Hong Zhang at the UvA’s Molecular Photonics research group.

Schematics of the synthesis and structure of the nanoparticles. In the last step of surface modification photosensitizers are added to implement the photodynamic therapy, as well as molecules that target the tumour. At the far right, the working of the nanoparticle is depicted. It shows the principle of upconversion luminescence (UCL) imaging under NIR light irradiation, as well as the X-ray activated synergistic combination of radiotherapy and photodynamic therapy, monitored with red luminescence imaging.

The nanoparticle consists of a core surrounded by two outer layers. The outermost layer is capable of scintillation - a process that converts X-rays into visible light and thus enables photodynamic therapy at any location accessible by radiation therapy. The second layer is a buffer layer that energetically isolates the scintillating layer from the nanoparticle core. In the core itself, the researchers implemented another important therapy-enhancing feature. It is capable of upconversion luminescence which means it can change the frequency of light. The researchers tuned the upconversion in such a way that the nanoparticle emits a red visible light upon illumination with near infrared (NIR) radiation or X-rays. In this way they have effectively brought about the possibility of image-guided therapy. On illumination with NIR, which has a relatively long penetration depth, the particles light up in a strong red colour and thus reveal the location of the tumour. The core continues to emit red light during radiotherapy using X-rays, albeit at a lower intensity. The emitted red light does not interfere with the photodynamic therapy. 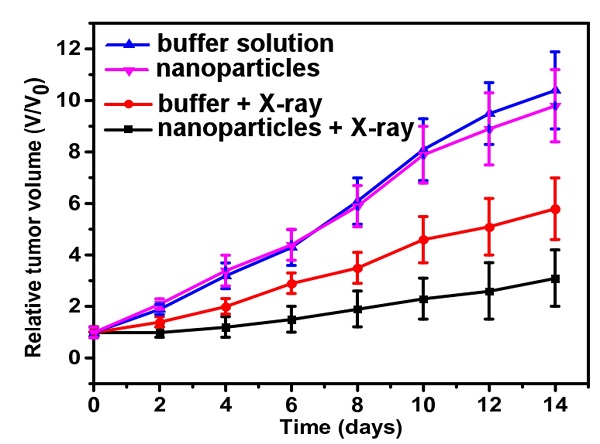 Results of tumour suppression tests in mice. The two lines above indicate the importance of X-ray in this approach, as there are no obvious tumour suppression effects neither with injection of the nanoparticle solution or a harmless phosphate buffered saline solution. The two lines at the bottom indicate the efficacy of the nanoparticles: when exposed to X-rays they result in a considerably reduced tumour volume in comparison to the group injected with the buffer solution.

As a proof of principle, the researchers studied the performance of the nanoparticles in cancer treatment studies with cell cultures (in vitro) and mice (in vivo, see image at left). This provided a clear indication of the safety and therapeutic potential of the particles.

In cooperation with Innovation Exchange Amsterdam (IXA, the university's technology transfer office), the researchers are now looking for licensees and/or partners to further develop this new approach into a commercially viable application, which would include the completion of preclinical trials and further entry into full clinical trials. This would be instrumental in establishing the safety of the nanoparticles, their ease of use, their performance during therapy, and the overall efficacy of their application.

Read the original article on University of Amsterdam.