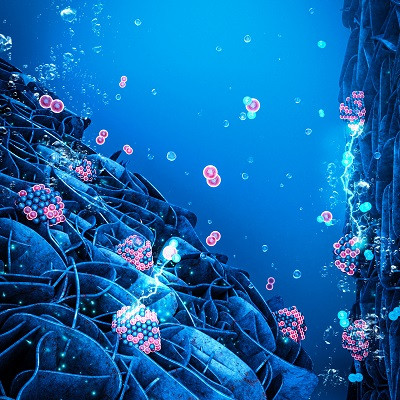 An electrode made from inexpensive earth-abundant metals bubbles with potential for green fuel production.

A metal foam could underpin a low-cost method for generating carbon-free fuels, researchers from KAUST have shown. The team seamlessly coated the foam with iron and cobalt nanomaterials to create a highly active electrode for a device that splits water molecules to release oxygen and hydrogen, a potential green fuel.

Due to the intermittent nature of wind and solar energy electricity, there is a need to develop methods to convert renewable electricity into a carbon-free fuel that could be stored and transported for later use. “Electrochemical water splitting is seen as a pragmatic route to reach this goal,” says Pravin Babar, a postdoc in Cafer Yavuz’s lab, who led the research. An electrochemical device can use renewable electricity to break apart water molecules, releasing oxygen at the anode and hydrogen at the cathode.

Existing high-performance water-splitting devices rely on electrodes made from rare and expensive metals, which limits their widespread rollout and use. “Our motivation is to replace the precious metal-based anode in water-splitting systems, reducing costs and fostering convenient mass production while not compromising on performance,” Babar says. “We have developed an interface engineering strategy that uses more cost-effective materials that demonstrate performance almost on par with standard precious-metal-based anodes.”

Using a simple, rapid and scalable wet-chemical approach, the team grew two-dimensional cobalt iron hydroxide (CoFe-OH) nanosheets on nickel foam substrates, then deposited iron oxyhydroxide (FeOOH) nanoparticles onto the surface. By using nanomaterial deposition to engineer the interface between the electrode and the water, the team created a material that combined high electrical conductivity with a high surface area covered with abundant active sites for molecular oxygen (O2) production. The material also proved to be robust, with no drop-off in performance detected after 50 hours of continuous use.

The synergistic performance gains achieved by seamlessly combining nanomaterials in a single electrode material were a pleasant surprise, Yavuz says. “This is our first foray into renewable hydrogen from water electrolysis,” he says. “Our goal is to develop a sustainable system for overall water splitting, not just the oxygen evolution reaction,” he adds. “We are very excited that our designs are working and expect to have a working prototype device in a few years.”