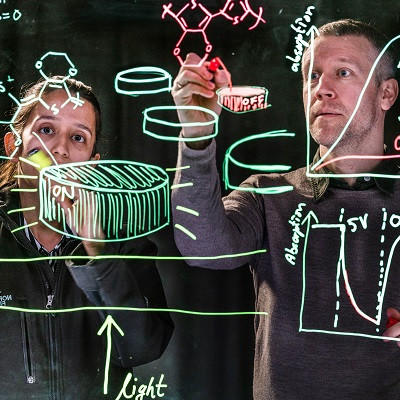 Researchers at Linköping University have developed optical nanoantennas that can be turned on/off and gradually tuned by applying electrical potentials. The study, which has been published in Advanced Materials, opens for applications including dynamic flat metaoptics and tuneable smart materials.

Already in the medieval times, nanostructures of noble metals were embedded in glass to create beautiful colours. Although not known at the time, the colours appear because light at certain frequencies transforms into plasmons, which are collective charge oscillations in the metallic nanoparticles. The nanoparticles act as antennas for light, which makes them very versatile. For example, plasmonic nanoantennas are now explored in applications ranging from energy conversion and photocatalysis to biosensing and flat metaoptics.

A major limitation, however, has been that optical nanoantennas made from conventional metals like gold or silver have fixed properties that cannot be tuned after fabrication. This limits their use to static functions in devices. With the prospect of realising dynamically tuneable nanoantennas, researchers have therefore begun to explore materials with optical properties that can be changed back and forth. The ideal case would be a material that can be repeatedly switched all the way between being optically metallic and dielectric.Tunable antennas
Researchers at Linköping University in Sweden have demonstrated such dynamically tuneable plasmonic nanoantennas made from a conducting polymer, which can be switched between metallic and dielectric properties in the near infrared wavelength range. 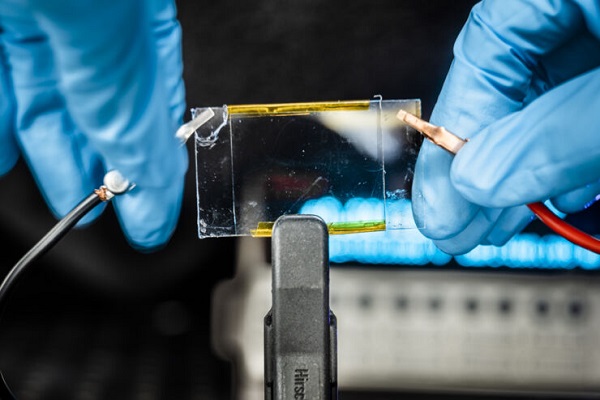 The antennas can be switched between metallic and dielectric properties in the near infrared wavelength range.

“While polymers are traditionally known to be non-conducting plastics, conducting polymers cannot only transport electricity but their electrical conductivity can also be modulated via the redox state of the polymer. We explore this behaviour for a new type of dynamic organic nanooptics”, says Professor Magnus Jonsson, who leads the group in which the research has been performed.Plasmonic properties
In a previous article in Nature Nanotechnology, the same team of researchers showed that certain conducting polymers can be made sufficiently conducting to obtain plasmonic properties. Nanoantennas made from the polymer could then be switched off and on again by exposing the samples to gases and liquids, which changed the polymer’s redox state. One of the key contributions of the new study is that the researchers now demonstrate electrical control of their polymeric plasmonic nanoantennas, forming a critical step towards more useful practical applications.

“By fabricating the conducting polymer nanoantennas on a transparent electrode and coating them with an ion conducting gel, we could control their redox state by an external potential”, says Dr. Akchheta Karki who is the main author of the study. “Besides repeated on/off switching we demonstrate the possibility for gradual tuning of the nanoantennas, controlled by the external bias potential”, continues Dr. Karki.Metaoptics and smart windows.

The researchers compare their results with optical simulations and calculations to better understand the underlying mechanisms of the tuning process. The results indicate that both the density and mobility of the charge carriers in the nanoantennas vary during tuning and that the process is reversible.

“Conducting polymers form an interesting new type of materials for dynamic nanooptics, thanks to the possibility to vary their properties between metallic and dielectric. In turn, the transition in the field from static to dynamic nanooptics is important for many future applications, including steerable metaoptics and dynamic smart windows.”, says Magnus Jonsson.