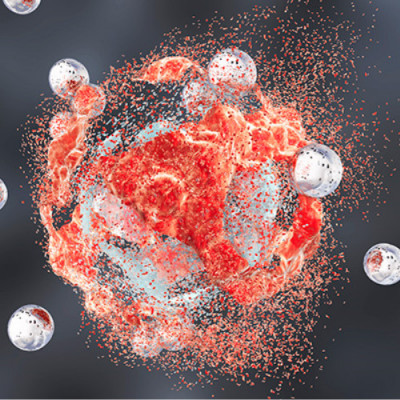 In a research collaboration with Mayo Clinic, nanomedical company NaNotics LLC plans to develop and assess a novel subtractive nanoparticle for use in cancer treatment.

The company’s nanoparticles, NaNots, treat disease by capturing and clearing pathogenic molecules from the blood. The goal of the current collaboration is to generate a NaNot that targets the soluble form of the PD-L1 protein, submit an investigational new drug application to the FDA and initiate human trials within 2 years.

“NaNots invert the normal drug paradigm — whereas drugs add molecules to the body, NaNots are a net subtraction of molecules from the body,” Lou Hawthorne, CEO of NaNotics and inventor of NaNots, said in an interview with Healio. “It’s an injectable nanoparticle that captures a target and clears it from circulation through macrophages. NaNots are only active against soluble targets in blood. A drug would hit the soluble form of a target of interest, but it’s also going to hit the membrane forms that perform a vital regulatory function.”

Cancer cells with high levels of PD-L1 prevent the immune system from attacking tumors, allowing them to progress. Approved drugs that target PD-L1 are not able to differentiate pathogenic soluble PD-L1 from membrane PD-L1, which can lead to dose-limiting toxicity.

“PD-L1 is an inhibitory receptor cancer cells use to trick the immune system into backing off and shutting down,” Hawthorne said. “However, if you drug either PD-L1 or the PD-1 receptor on immune cells, you’re also going to interfere with the ability of specialized cells to tell the immune system that they belong there.”

He said the seven currently approved PD-L1 inhibitors represent a market “worth $30 billion a year,” but they all produce off-target toxicities. NaNots differ from those therapies in that they attack soluble PD-L1 without affecting membrane forms of the same target.

“This is a way to take out the soluble inhibitory protein but not disturb the normal, healthy regulatory system on that pathway,” Hawthorne said. “Drugs that target PD-L1 are not able to do this.”

NaNots against other targets have shown greatly reduced toxicity compared with drug therapies in preclinical studies, he said.

‘A free line of attack’

The current research collaboration will involve NaNotics’ nano-depletion platform and will incorporate an antibody Mayo Clinic researchers designed against PD-L1. Once it is incorporated into a NaNot, this antibody will be specific to soluble PD-L1. Mayo Clinic will also contribute a transgenic mouse model designed to study soluble PD-L1.

“Mice don’t normally produce soluble PD-L1,” Hawthorne said, “One of the great things about this collaboration is that Mayo Clinic has engineered a transgenic mouse model that secretes the human form of soluble PD-L1.”

Hawthorne said the researchers have a 2-year ramp-up to the start of human trials. He expressed optimism about the potential long-term benefits of this technology.

“We think that as we develop NaNots against new tumor-generated inhibitors, each new NaNot will significantly increase the number of different types of cancer we can treat,” he said. “For each patient, treatment will start with a measurement of which tumor-generated immune inhibitors are elevated in their blood. We will deplete them from circulation with the right NaNot to induce migration of those inhibitors out of the tumor microenvironment, after which the immune system will have a free line of attack toward the tumor.”

Read the original article on Healio.