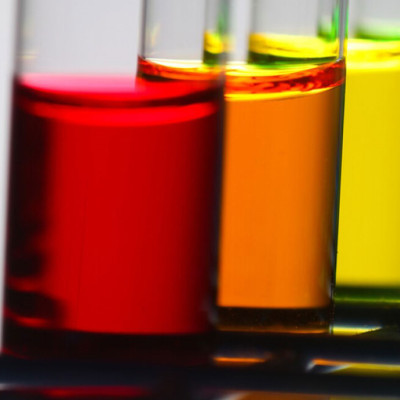 Graphene consists of a planar structure, with carbon atoms connected in a hexagonal shape that resembles a beehive. When graphene is reduced to several nanometers (nm) in size, it becomes a graphene quantum dot that exhibits fluorescent and semiconductor properties. Graphene quantum dots can be used in various applications as a novel material, including display screens, solar cells, secondary batteries, bioimaging, lighting, photocatalysis, and sensors. Interest in graphene quantum dots is growing, because recent research has demonstrated that controlling the proportion of heteroatoms (such as nitrogen, sulfur, and phosphorous) within the carbon structures of certain materials enhances their optical, electrical, and catalytic properties. 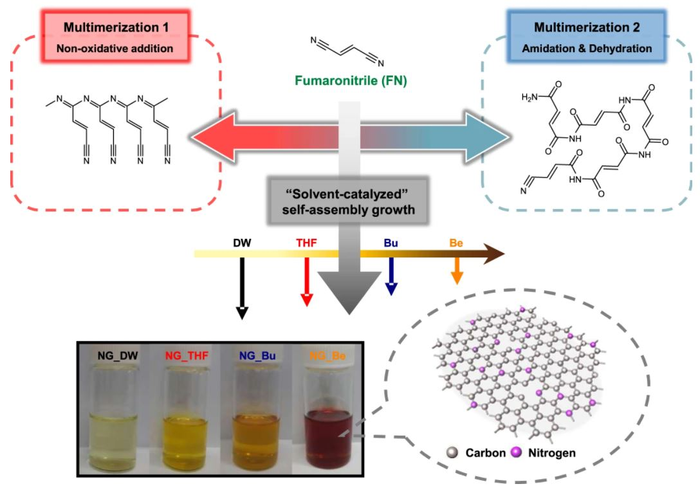 Schematic diagram of the possible formation mechanisms of NGs through the thermolytic self-assembly reaction of FN, and photographs of their ethanol solution preparation under four different solvent systems.

The Korea Institute of Science and Technology (KIST, President Seok-Jin Yoon) reported that the research team led by Dr. Byung-Joon Moon and Dr. Sukang Bae of the Functional Composite Materials Research Center have developed a technique to precisely control the bonding structure of single heteroatoms in the graphene quantum dot, which is a zero-dimensional carbon nanomaterial, through simple chemical reaction control; and that they identified the relevant reaction mechanisms.

With the aim of controlling heteroatom incorporation within the graphene quantum dot, researchers have previously investigated using additives that introduce the heteroatom into the dot after the dot itself has already been synthesized. The dot then had to be purified further, so this method added several steps to the overall fabrication process. Another method that was studied involved the simultaneous use of multiple organic precursors (which are the main ingredients for dot synthesis), along with the additives that contain the heteroatom. However, these methods had significant disadvantages, including reduced crystallinity in the final product and lower overall reaction yield, since several additional purification steps had to be implemented. Furthermore, in order to obtain quantum dots with the chemical compositions desired by manufacturers, various reaction conditions, such as the proportion of additives, would have to be optimized. This would inevitably lead to increases in the overall duration of the process and the manufacturing cost per unit.

The conventional fabrication method uses acidic precursors or solutions, and thus requires neutralization and purification steps. Conversely, the newly developed process uses weakly alkaline precursors that are neutralized during synthesis, meaning this process has the advantage that the produced graphene quantum dots require no additional processing before they are ready to use.

The research team also used computer modeling based on computational chemistry to discover that the solvent used in the synthesis process of graphene quantum dots affects the oxidation of the organic precursor, fumaronitrile, which also contains the heteroatoms (nitrogen). This implied that the solvent type ultimately determines the chemical composition of the final graphene quantum dot product. Furthermore, the theoretical oxidation energy value of the organic precursor, which was calculated based on the particular solvent used, was experimentally proven to have the ability to predict the approximate chemical composition of the final graphene quantum dot.

Dr. Sukang Bae of KIST stated, "We have developed a new platform technology that allows us to synthesize graphene quantum dots by selectively adjusting the chemical composition of heteroatoms with a single synthetic process, without the use of other additives other than organic precursors such as fumaronitrile," and added, "Because we discovered a way to achieve the mass synthesis of graphene quantum dots without additional post-processing or purification processes, we were able to reduce the overall processing time and increase the economic feasibility of the synthetic procedure."

Furthermore, this achievement is expected to drive the development of nanocarbon materials, as well as increase economic opportunities for small and medium-sized enterprises, and further the growth of human resources in connection with the expansion of the carbon-materials industry, which is the regional strategic industry of the Jeollabuk-do Province.