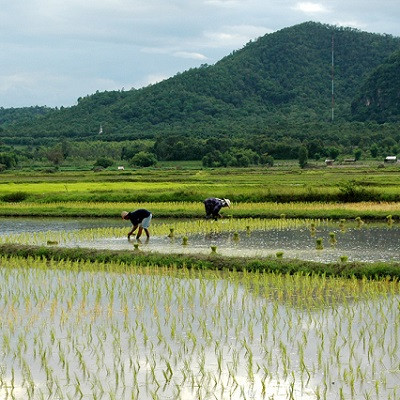 The IIT Kanpur-developed nanoparticles can be used to enhance crop protection and enrich the soil.

A team of researchers at the Indian Institute of Technology Kanpur (IIT Kanpur), in collaboration with the Indian Council of Agricultural Research (ICAR), has developed a novel nanoparticle-based Bio-Degradable-Carbonoid-Metabolite (BioDCM) that can protect crops from fungal and bacterial infection.

The team of researchers was led by Santosh K Misra and Piyush Kumar from the department of Biological Sciences and Bioengineering and worked with researchers C. Kannan and Divya Mishra from ICAR-Indian Institute of Rice Research; and R. Balamurugan and Mou Mandal from the School of Chemistry of the University of Hyderabad.

The technology is a protective biological alternative that can be used to enhance crop protection against various diseases in the agricultural field, especially for rice crops. It is developed as a biodegradable nanoparticle system with a metabolite, the end-product of metabolism or the process of conversion of food, extracted from the naturally occurring common soil fungi, namely, Trichoderma asperellum Strain TALK1. This extracted metabolite can be used as an effective organic antimicrobial agent and carbonaceous degradable encompassing to protect against crop diseases and enrichment of the soil, respectively.

“Our institute has undertaken many innovative hi-tech projects to help farmers. As the problems faced by the farmers are multi-fold, our efforts also have been relentless to enrich the whole ecosystem of farming, in general. In that regard, the invention of these novel nanoparticles would lessen the worries of crop infection and give a boost to crop yield. I congratulate the whole team for their efforts in delivering another boon to the farmers,” IIT Kanpur director Abhay Karandikar.

This comes as the second such innovation in the agriculture sector since last year from IIT Kanpur. Last year, out of the 107 patents filed by the institute, one invention was the Bhu-Parikshak soil-testing device that has proven to significantly reduce the time and hassle required for testing soil in the lab.