What Drives Electron–Hole Asymmetry in Graphene? 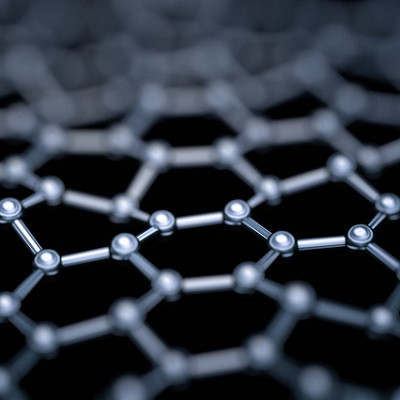 Using the Advanced Light Source (ALS), researchers determined that interactions between electrons are what give rise to the divergent effects observed when graphene is doped with electrons versus holes.

A better understanding of this electron–hole asymmetry could lead to new avenues for generating exotic material phases, including unconventional superconductivity. 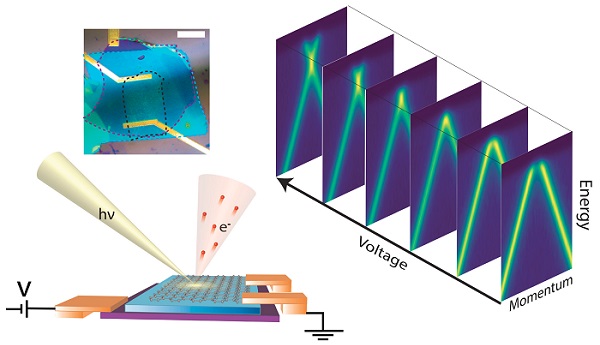 Differences in a material’s electronic properties can sometimes arise upon doping with electrons as opposed to holes. This electron–hole asymmetry has a profound impact on the emergence of exotic material phases, including superconductivity. How this breaking of symmetry between electrons and holes can drive new ground states and phase transitions is still an open and foundational question in condensed matter physics. Indeed, electron–hole asymmetry is one of the key recurring features in the phase diagrams of many quantum materials, including cuprate superconductors, twisted graphene sheets, and other heterostructures whose slightly mismatched lattices produce moiré patterns. Such materials all exhibit strong electron–electron interactions and unconventional superconductivity.

The quest to study this fundamental question leads to single-layer graphene, the parent material for most moiré systems. Electron–hole asymmetry in graphene has mainly been attributed to extrinsic sources such as impurities and strain, as opposed to intrinsic effects such as particle interactions (i.e., electron correlations). In this work, a team led by researchers from Berkeley Lab’s Materials Sciences Division and the University of California, Berkeley, used angle-resolved photoemission spectroscopy (ARPES) to determine that, contrary to earlier thinking, intrinsic electronic correlations are in fact the primary driver of graphene’s electron–hole asymmetry.

Gated ARPES at the ALS

Addressing the origin of electron–hole asymmetry in graphene today requires a probe that has complete access to the self-energy of quasiparticles in the material (i.e., the effects of a particle’s interaction with its environment) as a function of energy, momentum, and doping. ARPES can access the full energy- and momentum-dependent band structure, but in the past it has typically required methods of doping that fundamentally alter the properties of the sample.

The very recent introduction of electrostatically controlled doping into ARPES experiments at ALS Beamlines 4.0.3 and 7.0.2 enables studies of the doping-dependent self-energy while leaving the samples in pristine condition. In this methodology, a positive (or negative) voltage established between a graphite gate and the graphene sample results in the addition (or subtraction) of electrons, altering the balance of electrons and holes in the sample while changes in the band structure are probed.

Based on the ARPES data, direct measurement of band velocities (vD) at the Dirac point as a function of carrier density (ne) (left) and quasiparticle lifetimes as represented by the imaginary part of the self-energy (Im Σ) normalized by the Fermi energy (EF) (center), indicate that electron–hole symmetry is broken in graphene near charge neutrality (ne = 0). The so-called fine-structure constant α (right) is a measure of the charge correlation in graphene and shows an abrupt jump between negative and positive doping levels.

The high-resolution gated ARPES results revealed striking asymmetries in features of the band dispersion (energy vs momentum data) and associated calculations of quasiparticle lifetime. Detailed analysis of the results allowed the researchers to rule out sources of asymmetry inconsistent with the data. These eliminated mechanisms include inherent band-structure differences enhanced by strain (induced, for example, from alignment to a substrate with a different lattice constant) and the presence of charged impurities. Based on this line of reasoning, the researchers concluded that the primary driver of the observed electron–hole asymmetry is strong electronic correlations.

These findings open the intriguing possibility that electron–electron interactions might also be responsible for the asymmetries found in twisted bilayer graphene, similar correlated two-dimensional moiré systems, and high-temperature cuprate superconductors. Given that the moiré strain can be leveraged to enhance the strength of correlations in two-dimensional heterostructures, the researchers speculate that breaking electron–hole asymmetry via moiré-enhanced correlations can be an exciting alternative pathway to realize exotic quantum phases in twisted two-dimensional heterostructures.