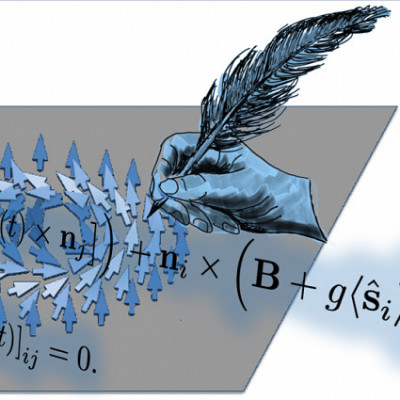 Research at Lund University in Sweden has found a new way to create nano-sized magnetic particles using ultrafast laser light pulses. The discovery could pave the way for new and more energy-efficient technical components and become useful in the quantum computers of the future.

Magnetic skyrmions are sometimes described as magnetic vortices. Unlike ferromagnetic states - which occur in conventional magnets such as compasses and refrigerator magnets - the skyrmion state is quite peculiar: the orientation of the magnetization does not point in the same direction everywhere in the material, but is instead best described as a kind of swirling magnetism.

Skyrmions are of great interest to both basic research and industry, as they can be used to manufacture more compact computer memories. However, that is easier said than done. Using skyrmions for technical purposes requires efficient ways of writing, erasing and manipulating the particles on short time scales, and with high spatial precision.

In a new study, researchers Claudio Verdozzi from Lund University and Emil Viñas Boström and Angel Rubio from the Max Planck Institute for the Structure and Dynamics of Matter in Hamburg have found a new approach.

“In our study, we have theoretically shown how it is possible to meet one of these requirements, that is, how to create magnetic skyrmions in ultra-short time scales using pulses of laser light”, says Claudio Verdozzi, physics researcher at Lund University.

The research team has identified a microscopic mechanism that explains an experimental protocol that has been shown to be useful in creating the strange skyrmions. Using femtosecond laser pulses - light pulses that last one millionth of a billionth of a second - the researchers showed that it is possible to create skyrmions ultra-fast.

“Our results are of great relevance to creating more energy-efficient technical components. Our study shows that light can be used to manipulate localized magnetic excitations in very short time scales”, says Claudio Verdozzi.

There are a number of applications that the new discovery can lead to, including quantum technology - an area where quantum mechanical properties are used to solve extremely advanced calculations that traditional computers cannot handle. Magnetic excitations such as skyrmions and so-called spin waves are also believed to be able to help reduce energy consumption in technological components, and can thus help to achieve future climate goals.

“Skyrmions are in focus for both theoretical and experimental research thanks to their technological potential. Also, their exotic magnetic patterns possess a conceptually and mathematically beautiful appeal that makes them very interesting”, concludes Claudio Verdozzi.