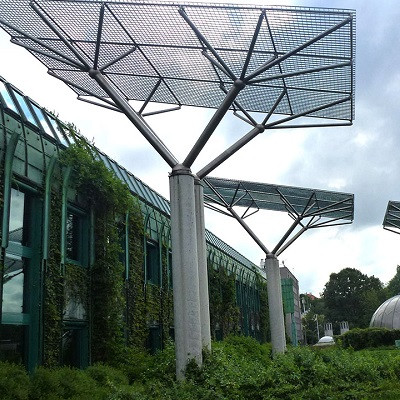 Solar Optics and the Korea Institute of Materials Science have developed a curved photovoltaic power generation system that incorporates optical fibers and solar cells, shows a high power conversion efficiency even without direct sunlight reception, is capable of doubling the average daily duration of maximum conversion efficiency, and produces the same amount of electricity as an existing system using a photovoltaic panel area reduced by 80 percent or more.

Existing photovoltaic power generation systems produce electricity by vertically absorbing sunlight with flat panels. The two-dimensional structure entails limitations in terms of receptivity and angle, about 76 percent of its area is used inefficiently, and its maximum efficiency continues for less than 210 minutes a day.

The institute and the startup formed nano holes in optical fiber surfaces so that light diffusion can be maximized in every direction. In addition, they formed an organic matter-based solar cell structure in order to absorb the diffused light as much as possible.

“In this three-dimensional structure, a high level of efficiency can be maintained for long regardless of the angle of light reception and the maximum efficiency of the panel is maintained for at least six hours a day,” they explained, adding, “The optical fibers are capable of lateral light emission and the new system can be installed indoors unlike existing systems.”

Read the original article on BusinessKorea.