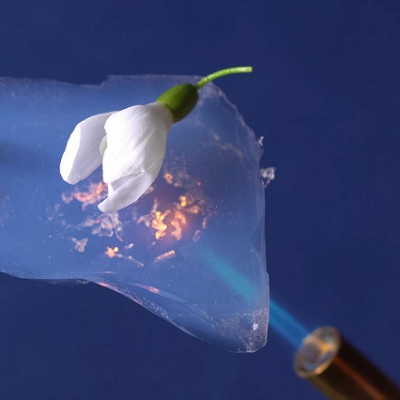 New aerogel materials that can maintain their functionality and superelasticity under extreme temperatures have been developed by a team of researchers from Sichuan University.

Now, new aerogel materials that can maintain their functionality and superelasticity under extreme temperatures have been developed by a team of researchers from Sichuan University. The results were published in Nano Research on July 14.

“We aimed to solve the problem that the performance of conventional protective aerogel materials deteriorates severely under harsh working conditions,” said corresponding author Hai-Bo Zhao, professor in the College of Chemistry at Sichuan University.

Prior to Zhao’s team’s developments, polymer-based foam materials were commonly used as protective materials. These materials exhibited the positive traits of superelasticity and high compressibility but were unable to maintain these properties after the melting temperatures of the polymers. Another commonly used material were metallic and ceramic foams, which were stable across temperature ranges in a way that their polymer-based foam counterparts were not but did not have the elasticity needed to be practical.

An approach that came closer to a scalable solution involved using carbon aerogels, which have characteristics that lend themselves well to thermal insulation and electromagnetic interference, such as high specific surface area, low density, good electrical conductivity and chemical and thermal stability. However, carbon aerogels have limitations due to certain inherent properties. Carbon nanotubes became a popular way to construct superelastic carbon aerogels, since they could maintain the needed properties at high temperatures, but because the preparation required so many steps, the methods were not scalable.

By focusing on the microstructure design, Zhao’s team was able to develop a polymer aerogel with superelasticity that functioned in a temperature range of -196-500°C with a process that was scalable and practical.

“Unlike most carbon aerogels reported previously that usually possess poor mechanical properties, the prepared aerogel materials exhibit temperature-invariant superelasticity while maintaining multifunctional protective performance,” said Zhao, who is also affiliated with the National Engineering Laboratory for Eco-Friendly Polymeric Materials in Sichuan and with the Collaborative Innovation Center for Eco-Friendly and Fire-Safety Polymeric Materials.

Zhao’s method uses bidirectionally oriented carbon/carbon aerogel composite multi-walled carbon nanotubes — in other words, a combination that allows for combining the positive traits of carbon aerogels with the positive traits of carbon nanotubes — with a highly ordered carbon skeleton, one of the key differentiators between this new method and previous methods. Their scalable method of achieving the desired microstructures — specifically, highly oriented arch structures — involves a bidirectional freezing and carbonization process to develop the carbon/carbon aerogels.

“The reported aerogel materials maintain superelasticity, high electromagnetic interference shielding effectiveness, thermal insulation and infrared stealth in a wide temperature range from -196 to 500 °C and after cyclic compression for hundreds of times,” Zhao said. “The most exciting aspect is the economic and simple preparation process, which laid the foundation of the potential practical application of the material.”

Zhao said that the next step is to make the aerogels available for use in commercial, military and other contexts.

“We would like to promote the industrialization of the reported aerogel and further the application in 5G technology, high rise buildings, military use and more,” he said.

The other authors of the paper were Bo-Wen Liu, Min Cao, Yi-Ying Zhang and Yu-Zhong Wang, all of Sichuan University.

The National Natural Science Foundation of China, the Fundamental Research Funds for the Central Universities, the Young Elite Scientists Sponsorship Program by CAST and the 111 Project funded this work.