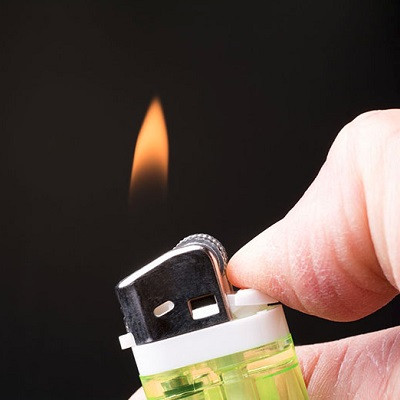 Researchers have found that NbOI2 displayed a piezoelectric response that is much larger than reference materials in both the bulk and few-layer samples.

Piezoelectric materials can convert mechanical energy to electrical energy, and vice versa. In recent years, there has been growing interest in the search for two-dimensional (2D) layered piezoelectrics. Such layered van der Waals piezoelectrics are particularly useful for niche applications such as actuators with atomic-scale precision and wearable sensors. In addition, 2D piezoelectrics can function as nanoscale power generators for nanoscale devices.

The discovery of 2D piezoelectrics has mostly been on an ad hoc basis. A systematic search through a 2D materials database is required to uncover 2D materials which are most suited for use as piezoelectrics. The research team led by Associate Professor QUEK Su Ying from the Department of Physics, National University of Singapore, performed such a systematic search through a database of 2,940 layered van der Waals materials using high-throughput first principles calculations. Of the 2,940 materials, the team identified 109 materials that exhibit piezoelectric effects in the single layer form. Among these materials, about 10 of them are found to have exceptionally large piezoelectric coefficients with the highest being those for NbOI2. Materials with high piezoelectric coefficients generally give better piezoelectric performance. The results of the high throughput search are provided in the figure below.

NbOI2 belongs to a family of niobium oxydihalides (NbOX2: X = Cl, Br, I) which have large piezoelectric coefficients. The researchers made a more detailed study of this material family and found that NbOX2 has an intrinsic ferroelectric polarisation as its crystal structure is not symmetrical in the x-direction (see figure (right)). Interestingly, the piezoelectric coefficients are the largest for NbOI2, while the ferroelectric polarisation is largest for NbOCl2. 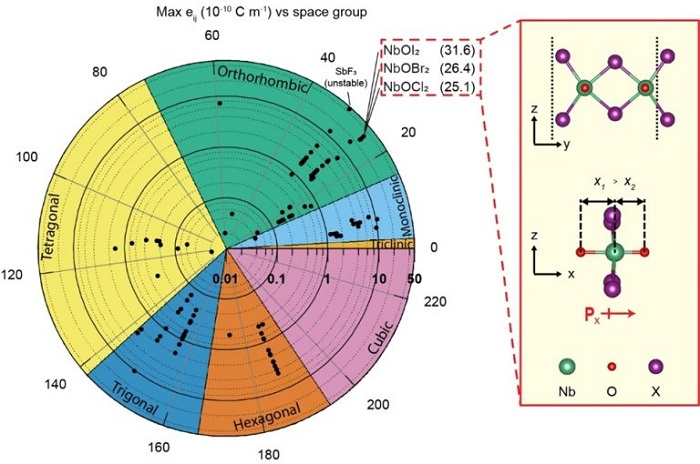 Figure shows (left) the sheet piezoelectric stress tensor elements computed for 2,940 different materials in their monolayer form. The maximum sheet piezoelectric stress tensor elements, eij, are plotted on a log scale in units of 10-10 C/m (radial axis), according to the space group (crystal structure) classification for the materials (angular axis). (Right) the atomic structure of NbOX2 (X = Cl, Br, I) shows a breaking of symmetry in the x-direction.