Converting carbon dioxide (CO2) into fuel using solar energy is an attractive route to reduce reliance on fossil fuels. Photothermal CO2 catalysis, a process that uses sunlight to locally heat tiny metal nanoparticles to reach a high enough temperature to catalyze CO2 conversion reactions, is a promising approach, but materials that can more efficiently use solar energy are needed.

A group of scientists from Soochow University, led by physicist Xiaohong Zhang, and chemist Le He, introduced a new approach to photothermal CO2 catalysis that could meet these needs by taking lessons from the greenhouse effect. 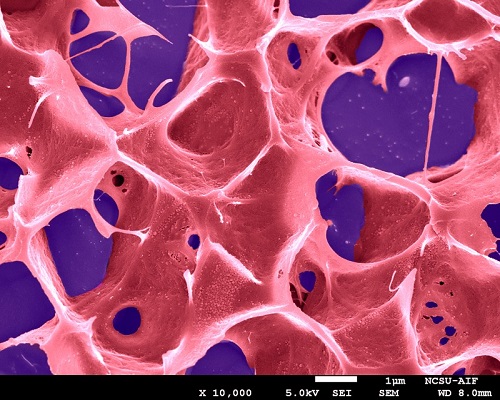 A hydrogel loaded with catalase, developed by Zhuang Liu and his team for potential cancer immunotherapeutic applications.

After making a connection between the heating of metal catalysts by sunlight, and the Earth’s warming, He and the team were inspired to look for materials that behaved like greenhouse gases to trap the emission of infrared radiation from the hot metal nanoparticle cores. “We wanted to use a ‘nanoscale greenhouse effect’ to enhance the photothermal efficiency of catalysts,” he says.

The catalyst in this case is a nickel nano-crystal that the team encapsulated in a nanoporous-silica shield ([email protected]), which facilitates ‘methanation’. Methanation is a chemical reaction that converts carbon monoxide (CO) and CO2 to methane through hydrogenation, and ‘reverse water–gas shift reactions’ — a method of producing water from CO2 and hydrogen, with CO as a side product, when heated sufficiently.

When exposed to sunlight, the thermal energy of the heated nickel core, confined therein by the heat insulation and infrared shielding effects of the nanoporous silica sheath, enables a supra-photothermal effect.

The researchers tested the performance of the catalyst in a series of experiments and compared it to that of conventional photothermal catalysts. They found that under illumination, the local temperatures achieved by their catalyst significantly exceeded those of other Ni-based catalysts without a silica shell. Using the silica encapsulated catalyst, sintering (compacting and forming a solid mass of material by heat or pressure) and coking (converting carbon into solid residue) were reduced, which improves the stability of the photothemal process.

“Our study provides new insight into the design principle of optimal photothermal catalysts. It also proves that it is possible to convert carbon dioxide and renewable hydrogen into valued chemicals and fuels with an unprecedented rate and robust long-term stability based on cheap and earth-abundant elements. This represents a key step towards a sustainable solar fuels industry,” said He.

Cancer immunotherapy activates a patient’s own immune systems to recognize and attack tumour cells. However, the clinical success rate has much scope for improvement, especially for the treatment of solid tumours. A FUNSOM research team led by biomedical scientist, Zhuang Liu, is developing a variety of biomaterials-based technologies to address this challenge. They are using biomaterial or nanomedicine-based agents with both immune-stimulating and tumour-microenvironment-modulating abilities, to enhance both local tumour treatment and antitumour immune responses.

The lack of oxygen and an acidic pH within the tumour are responsible for disarming immune cells, so various nanomedicine strategies have been developed by Liu’s group to relieve tumour hypoxia, or neutralize the tumour pH, so as to make tumours vulnerable to immunotherapies.

Strategies tested in mice include the use of nanomedicine or hydrogels loaded with catalase — an enzyme that breaks down hydrogen peroxide to water and oxygen — to decompose hydrogen peroxide produced inside a tumour and ease hypoxia; perfluorocarbon nanodropets for oxygen delivery into tumours; and CaCO3 nanoparticles to neutralize the pH of tumours.

There is huge potential in nanotechnology’s future applications, and FUNSOM researchers are dedicated to exploring its rapidly expanding frontiers.