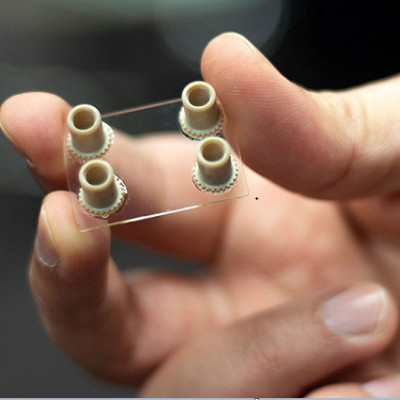 Millions of barrels of oil are produced daily from shale reservoirs, yet a significant amount remains untouched, trapped in molecular-sized pores on a nanoscale. Current reservoir models can’t predict oil behavior or recovery at this scale, so companies can’t accurately estimate production amounts for financial investors.

Texas A&M University researchers built and tested (potentially) the smallest nanopore-scale glass-topped lab-on-a-chip (LOC) research platform to investigate complex fluid behaviors at the nanoscale so they could calculate them.

The Crisman Institute for Petroleum Research funded the project.

Dr. Hadi Nasrabadi, Dr. Debjyoti Banerjee and their graduate students, Qi Yang and Ran Bi, co-designed the ultra-tiny LOC and had it manufactured in Texas A&M facilities such as the AggieFab Nanofabrication Facility and the Microscopy and Imaging Center. The device allows them to visually study and record the liquid to vapor and back to liquid phase changes oil and other elements go through on a scale similar to the conditions in a shale reservoir.

“This was the first time I did a project where the company representatives were more interested in the equations we uncovered rather than the experimental data we produced,” said Banerjee, the James J. Cain ’51 Faculty Fellow I in the J. Mike Walker ’66 Department of Mechanical Engineering. “It’s a bizarre example of how thermodynamic equations can affect the stock price of a company. The equation goes into estimating how much oil reserves a company owns or can produce, and this affects their value on Wall Street, or if they can get a financial loan at a particular interest rate.”

Nasrabadi and Banerjee started with 50-nanometer (nm) diameter test channels in their LOCs before working down to 2-nm diameter channels, which are slightly smaller than the width of a DNA strand. At this scale, matching tight shale layering, oil reacts to temperature, pressure and confinement fluctuations by vibrating with quirky thermodynamic flips of fluid to gas and back again phase changes. Because producing oil from unconventional shale reservoirs is still a learning process, these changes are largely unexplored, yet they impact oil recovery and affect financial investor confidence.

“Industry is currently not delivering the oil they are estimating, and this is unintentional, in my opinion,” said Nasrabadi, the Aghorn Energy Career Development Professor in the Harold Vance Department of Petroleum Engineering. “Our research shows nanopore behavior does influence production, which explains the recovery discrepancy.”

The research also had delivery issues because three challenges ran hand in hand with doing experiments on such a small scale. First, the researchers had to learn about and implement atomic force microscopy to characterize the LOC’s channel since 2 nm is smaller than the wavelength of visible light, and the channel needed to be inspected and accurately measured. Second, they quickly learned that certain conditions, such as the humidity in the air or a car passing by the building, could cause enough disturbance or vibrations to throw off the results of the experiments. Third, getting images of the quirky phase-change reactions proved difficult because the camera needed a certain number of photons or fundamental light particles present. Tiny adjustments were constantly needed to improve the experiment recordings.

It took about two years for the research to yield direct, digitally captured images that aided observation studies of liquid to vapor to liquid transitions on a scale that had never been explored before. Nasrabadi, Banerjee, Yang and Bi wrote a paper on the work, which was published by Langmuir in August 2022.

The experiments were done at pressures up to 100 pounds per square inch (psi), but the researchers hope to increase levels to match actual reservoir conditions, which can range from 1,000 to 5,000 psi. They also hope to increase the temperatures to over 300 degrees Fahrenheit. These higher parameters were possible with LOCs containing 10-nm scale channels, but the 2-nm chip will need a few design modifications first.

“We also want to vary the LOC design to replicate shale formation conditions, such as using etched channels that mimic the irregularities within the rock,” said Nasrabadi.

Banerjee once worked in Silicon Valley, where he was awarded 17 patents and commercialized LOC platforms for a variety of biotechnology and nanotechnology startup companies. He noticed irregular flows of fluids confined on a nanoscale then but didn't have a way to pinpoint why they happened.

Years later, conversations Banerjee had with Nasrabadi on the interesting fluid confinement issues in shale reservoirs sparked a long collaboration that led to their project for the Crisman Institute. The success of the project has led to other conversations and ideas.

Banerjee believes the research has come full circle because the modifications they made to decrease the LOC scale below the size of a single DNA strand mean better genome or genetic material research is now possible. But the potential doesn’t stop there.

“At the 2-nm scale, even under normal pressure and temperature conditions, a nano-confined liquid can display properties similar to supercritical behavior,” said Banerjee. “And that has important implications for our understanding of supercritical fluids. Such insights could have deep implications for power production, space exploration and biotechnology applications. It’s truly remarkable.”