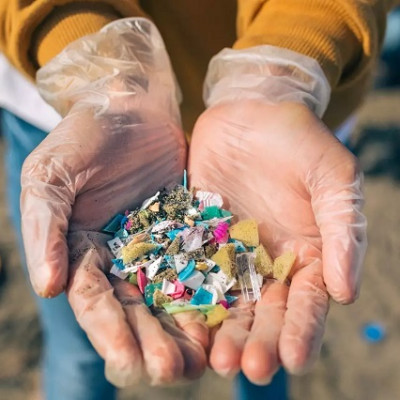 Joint research team of DGIST and Korea Institute of Industrial Technology developed the first technology that removes microplastics in water through triboelectric nanogenerator. Expected to solve the problem of various microtoxic particles in water including microplastics, which have emerged as a huge environmental concern.

DGIST (President Kuk Yang) announced on the 6th (Wednesday) that a research team led by Professor Lee Ju-hyuck of the Department of Energy Science and Engineering of DGIST, collaborating with the research team of Korea Institute of Industrial Technology (President Lee Nak-gyu) led by Dr. Cho Han-cheol, developed an eco-friendly microplastic removal technology that can remove micro-to-nano-sized microplastics in the water.

Microplastics are very small plastics (usually less than 5mm) that accumulate in the body and become a threat to humans by disturbing biological functions and so forth. These microplastics are mainly introduced into the ocean and eventually affect humans on the top of the food chain by disrupting the endocrine system of the marine life system. A technology to filter microplastics is needed to minimize the harm.

However, it is difficult to separate or dispose of microplastics in the water using filters due to their small sizes. In particular, nano-particles, smaller than microns, entail problems that are difficult to overcome, such as filter clogging and environmental pollution by the filter itself when we try to physically remove them using a filter. For this, there is a need for a new and eco-friendly method to overcome these limitations. 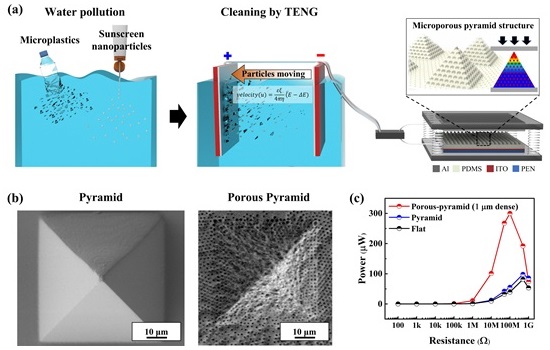 A schematic diagram of the process of removing microplastics through a porous pyramid structure and a high-power porous pyramid-based friction charging power plant.

As TENG generates electrical energy through physical energy, we can manufacture eco-friendly microplastic filters. In addition, since it utilizes the high voltage characteristic of triboelectric energy, it does not require a special external power source, which gives it the advantage that it can be operated without being restricted by location. The new porous microstructure-based TENG developed through this study showed more than threefold higher output than the existing TENG. The test of the new TENG showed that the removal rate of micro-sized microplastic particles was 21.4%, about 5.6 times higher than that of the existing TENG, which was recorded at 3.8%. In addition, it was confirmed that this technology can remove micro-sized microplastics and various micro-toxic particles such as nano-sized zinc oxides and silicon dioxides.

The result of the research was published in ‘Nano Energy,’ one of the prominent international scientific journals in energy engineering, online on June 11 and will be published in the journal in September.

Read the original article on Daegu Gyeongbuk Institute of Science and Technology (DGIST).