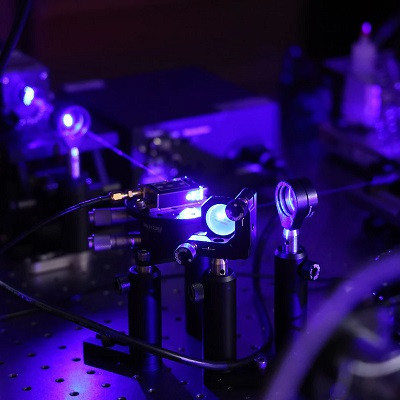 “The question we’re exploring in our lab is, what are the limits of cryogenic-free phonon engineering for shielding delicate quantum systems from the noisy thermal environment?” said Dr. Chandriker Kavir Dass, AFRL researcher.

Quantum information science is a research field involving the generation, manipulation and measurement of quantum systems such as single atoms, atomic defects in solid-state crystalline materials or superconducting electronic circuits. AFRL researchers are particularly interested in solid-state quantum science, a field that explores quantum physics in crystalline materials such as 2D materials, silicon carbide and diamond -- innovative materials with large potential for future technologies. However, working with the quantum systems in these solid-state platforms is complicated, especially at room temperature.


To remove the influence of the phonons on quantum systems at higher temperatures, AFRL researchers are exploring manipulations of material structure and internal strain to reflect, absorb or “freeze out” the lattice vibrations from disrupting the sensitive quantum systems.


“Much like a sound engineer will acoustically isolate a room to eliminate noise in the recording, or a guitarist will tension a guitar string to select for a particular frequency while freezing out lower frequencies, we are exploring these same ideas in quantum systems,” Kavir said.


At room temperature, the atoms that make up these materials vibrate violently, creating what we know as heat and sound within the material lattice. In the scientific language, these vibrations are known as phonons. Phonons can quickly destroy delicate quantum systems within the host material, so researchers typically cool materials down to very low temperatures in order to avoid these issues.


Maintaining a cold environment requires bulky, power-hungry equipment unsuitable for many potential applications within the Department of the Air Force, or DAF. In response to this problem, AFRL researchers are looking for a solution.


Researchers are experimenting with 2D materials like graphene and other 2D materials that can handle large amounts of strain before breaking. An area of particular interest is nano/micro electromechanical systems, or NEMS/MEMS. Found in everything from phones and cars to navigation systems and game controllers, these devices are universal, but researchers want to exploit quantum physics and improve these technologies.


Within the NEMS/MEMS field, there is an effort to push the operating frequencies up by scaling devices down or tensioning the vibrating elements. By pushing the operating frequencies high enough the thermal noise is effectively “frozen out” and it becomes possible to operate these devices in a quantum regime without the need to cool them down to low temperatures. In the last year, AFRL has invested in the understanding and engineering of phonon dynamics in quantum systems with the goal of enabling quantum technologies that operate at room temperature.


“If we can control and exploit how quantum systems interact with the surrounding environment, we can increase the system’s operating temperature,” said Dr. Robert Bedford, AFRL researcher. “This will strongly impact the suitability of quantum sensing, network and timing in DAF-relevant environments and make large impacts in terrestrial and space applications.”