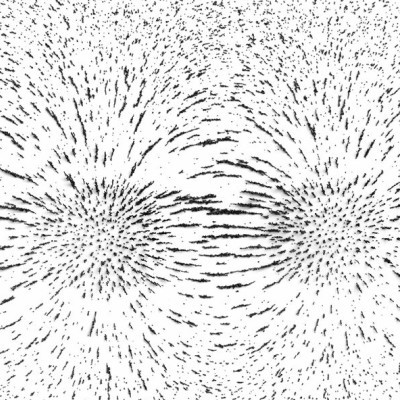 Whether looking out into space or peering deep into the microscopic realm, there is always more to see. In the case of solids, there is a world of atoms and particles teeming with activity that ultimately leads to useful properties like electrical conduction, magnetism, and insulation.

One of the most powerful tools for seeing the unseen is a scanning tunneling microscope or STM for short. Rather than an optical lens, its powerful eye comes from an electrical current that passes between the tip of the microscope and the sample material. The tip scans across the sample and produces a signal that changes based on how atoms are arranged within a given material. Taken together, the scans map out surfaces with sub-nanometer resolution, revealing electrons and single atom locations.

Recently a team of IQUIST researchers at the University of Illinois Urbana-Champaign added a twist to their STM by replacing the tip with a nanowire made from an exotic material, samarium hexaboride (SmB6). They use the nanowire to image magnetic features in an approach that has potential advantages compared to other methods. As published in the September 9th issue of Science, their combined measurements and calculations showed evidence of the unusual nature of the nanowire itself.

Scanning electron microscope image (left) of samarium hexaboride nanowire bonded to STM, with images from new study (middle and right). The middle image is a zoomed in view, showing light-dark-light striping that occurs in antiferromagnetic material.

“Lin Jiao, a former post-doc in our group, proposed the idea that this kind of nanowire tip may be able to give us a yes-no answer as to whether a material was magnetic or not,” said IQUIST member Vidya Madhavan, a physics professor and corresponding author on the paper. “Much to our surprise, Anuva Aishwarya, a graduate student in the group, showed that these tips could give much more information than that.”

At the heart of an STM is an effect that lets electrons “tunnel” through a barrier. Electrons are fundamental particles governed by quantum physics, and can act like waves. Unlike water waves, electrons don’t necessarily dissipate or bounce back completely when they hit a surface. As they encounter a super thin barrier a bit of the wave can leak through in a process called quantum tunneling. In an STM, there is a gap between the tip of the microscope and the sample material. The electrons can tunnel through this gap, creating an electrical signal that, in turn, contains information about the sample.

In addition to charge, electrons have a property called spin, which can be pictured as an arrow attached to the electron. Typically electrical currents might contain electrons with their spins pointed in random directions. But scientists can coax some materials into carrying currents with the spin direction locked. For example, fixed-spin (polarized) currents in STMs can be generated with a combination of magnetic tips and external magnets. Unfortunately, the added magnets can be invasive and may inadvertently affect the sample atoms. In the new study, the researchers took a different approach to creating spin-polarized currents.

Rather than employing a magnetic tip, the team used non-magnetic SmB6. Around a decade ago, scientists predicted that this material could be a Kondo topological insulator, which should have unusually stable spin-polarized currents without any added magnets. Thus, on the surface of SmB6 electric currents moving to the right should have electrons with spin-up, and vice versa for currents to the left. The currents can even survive in the face of unwanted defects in the material. This is a general feature of topological insulators, yet scientists have faced challenges translating this rather exotic physics into real-world technology applications. Moreover, scientists are still trying to understand the different varieties of topological materials. This new study provides strong evidence that SmB6 is indeed a Kondo topological insulator and puts its peculiar currents to work simplifying magnetic imaging.

In Madhavan’s laboratory, the team used nanofabrication to modify the STM. Zhuozhen (an undergraduate in the group) guided by Lin, spent hundreds of hours in a cleanroom developing this procedure. First, they used a beam of ions to chop off the normal tip, which is made of tungsten. Then they embedded the nanowire into a trench that is only a few hundred nanometers wide. The wires were around 60-100 nanometers in diameter, which is roughly the size of some viruses.

They scanned the tip across the surface of iron telluride, which is an antiferromagnet. Such materials have alternating regions of spin-up and spin-down electrons, and the overall magnetization cancels out. This is in contrast to more familiar common bar magnets, which have all electron spins pointed in a single direction. Previous STM images with magnetic tips showed light-dark-light stripes, which means the sample is antiferromagnetic. The team collected similar images with the new non-magnetic nanowire setup, which indicated that the tunneling electrons from SmB6 were spin-polarized. When the tip was over a region of the antiferromagnet with spins that matched the orientation of the spins of the surface current, the signal increased; otherwise, it decreased. The STM mapped out these variations as it scanned over the sample and showed clear patterns corresponding to the alternating-spin stripes.

To further confirm that the nanowire signals were related to the unusual currents of SmB6, the team warmed up the experiment above 10 Kelvin. At this temperature, SmB6 should no longer be a Kondo topological insulator and will lose its surface spin currents. Crucially, the STM no longer observed any antiferromagnetic stripes, even though the sample’s magnetic ordering survives at this temperature. They found that spin-polarized currents were simply not present in the nanowire above this temperature. The team performed a third check of the spin-polarized currents by switching the direction of the voltage applied to the nanowire tip. This reversed the direction of the tunneling current between the STM and the sample. The STM images showed that the contrast in the images is inverted, which can only happen if the tunneling electrons have spin-polarization that flips when the current changes direction. Together this evidence showed the exotic nature of SmB6.

“We can switch the nanowire on the tip to a different material, which would let us probe other, potentially unusual, aspects of our sample,” said Anuva Aishwarya, lead author and physics graduate student in Madhavan’s group. “I am very excited about this because it opens doors to a new nanoscale sensing technique!"

The tip properties were surprisingly repeatable, said Madhavan. The team could even expose the nanowires to air and they consistently did well in the STM. Much is still unknown about SmB6, but its robust performance combined with the measurement data is consistent with the predictions about its topological nature.

"This technique is perhaps the first real application of a topological insulator, and remarkably, for it to work, it is crucial that the origin of the topology is from strong many-electron interactions as expected in SmB6," said IQUIST member Taylor Hughes, who is professor of physics and co-author on the study.

In future studies, the team plans to modify the nanowire to see if it can reveal even more material features. For example, they are interested in creating and detecting exotic particle-like entities such as Majorana fermions, which have long been proposed as the basis for novel quantum computing devices.