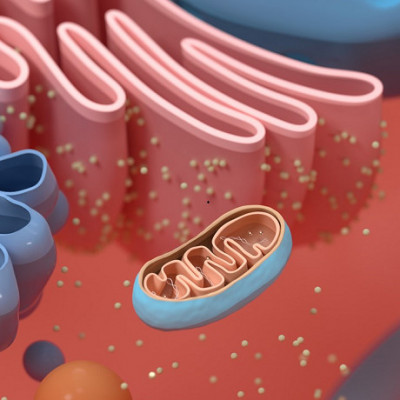 In a study using lab-grown cells, Johns Hopkins Medicine researchers specializing in aging report they have successfully delivered a common blood pressure drug directly to the inner membrane of mitochondria, the “power plants” in the cells of humans, animals, plants and most other organisms.

Developing ways to directly target these energy-producing parts of the cell for delivery of drugs has long been a goal for researchers because mitochondria drive, control or play a role in almost every biological process, including natural cell death and aging. Alterations or declines in mitochondrial activity and pathways are closely aligned with decreased organ function and frailty. But because of the mitochondria’s double-membrane structure, scientists have found it challenging to get drug molecules to penetrate the inner membrane and gain access to core functions of the organelles.

The new study, described in the Aug. 4 issue of PNAS nexus, reports on a method that essentially hijacks a system already used by mitochondria to transport oxygen and other chemicals to the inner membrane.

“Our study shows that we can use the body’s natural mitochondrial transport system to deliver drugs much more precisely,” says Peter Abadir, M.D., associate professor of geriatric medicine and gerontology at the Johns Hopkins University School of Medicine.

For the study, the researchers lab-synthesized three naturally occurring transport proteins that interact with mitochondria. They then fused a commonly prescribed blood pressure medication (losartan) to each of these three proteins to determine which had the highest success rate penetrating the inner membrane of the mitochondria. These fused proteins, dubbed mtLOS1, mtLOS2 and mtLOS3, when introduced to lab-grown cells in separate trials, were able to transport the drug directly to the mitochondria at a significantly higher concentration than was possible with free losartan not fused to the transport protein. This could be seen under a microscope using florescence.

In a proof of concept experiment, the researchers also tested a “scrambled” version of mtLOS, which was unable to penetrate the inner membrane.

Abadir says further research is needed, but the goal is to use mtLOS or other natural transport pathways to deliver medicines that directly and efficiently target the biochemical imbalances and losses linked to chronic inflammation and weakened organ function characteristic of aging and many disorders.

“We know people age in part because of mitochondrial decline, and scientists have been trying to get therapies directly into the organelle to counteract this decline for decades,” says Abadir. “This is another attempt at delivering compounds using the body’s natural systems, which may greatly reduce negative side effects both short and long term.”

Han Wang, Jeremey Walston, Peter Abadir and Ran Lin have filed for two patents based on this research. All other authors have declared no conflict of interest.