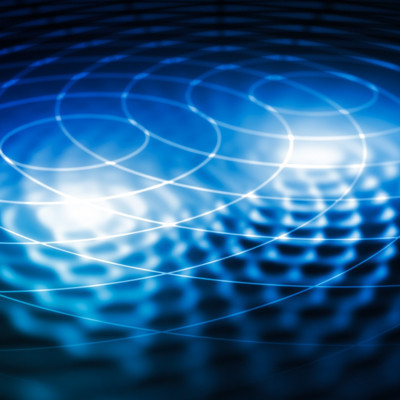 By confining the transport of electrons and ions in a patterned thin film, scientists find a way to potentially enhance material properties for design of next-generation electronics.

Like ripples in a pond, electrons travel like waves through materials, and when they collide and interact, they can give rise to new and interesting patterns.

Scientists at the U.S. Department of Energy’s (DOE) Argonne National Laboratory (ANL) have seen a new kind of wave pattern emerge in a thin film of metal oxide known as titania when its shape is confined. Confinement, the act of restricting materials within a boundary, can alter the properties of a material and the movement of molecules through it.

In the case of titania, it caused electrons to interfere with each other in a unique pattern, which increased the oxide’s conductivity, or the degree to which it conducts electricity. This all happened at the mesoscale, a scale where scientists can see both quantum effects and the movement of electrons and molecules.

In all, this work offers scientists more insight about how atoms, electrons and other particles behave at the quantum level. Such information could aid in designing new materials that can process information and be useful in other electronic applications.

“What really set this work apart was the size of the scale we investigated,” said lead author Frank Barrows, a Northwestern University graduate student in Argonne’s Materials Science Division (MSD). ​“Investigating at this unique length scale enabled us to see really interesting phenomena that indicate there is interference happening at the quantum level, and at the same time gain new information about how electrons and ions interact.”

Normally, when an electric current is applied to an oxide like titania, electrons flow through the material in a simple wave form. At the same time, ions — or charged particles — also move around. These processes give rise to the material’s electronic transport properties, such as conductivity and resistance, which are exploited in the design of next-generation electronics.

“What we did in our study was try to understand how we can change material properties by confining the geometry or shape of the film,” said co-author Charudatta Phatak, a materials scientist and group leader in Argonne’s MSD.

To start, researchers created films of titania, then engineered a pattern on them. In the pattern were holes that were a mere 10 to 20 nanometers apart. Adding the geometric pattern altered the movement of electrons the same way that throwing rocks into a body of water alters the waves that ripple through it. In the case of titania, the pattern caused electron waves to interfere with each other, which led the oxide to conduct more electricity.

“The interference pattern basically held in place the oxygen or ions that normally would be moving in materials like titania. And we found that holding those in place was important or necessary to get constructive interference of those waves,” Phatak said.

The researchers investigated conductivity and other properties using two techniques: electron holography and electron energy loss spectroscopy. To that end, they leveraged resources at Argonne’s Center for Nanoscale Materials (CNM), a DOE Office of Science User Facility, to fabricate their samples and make some of the measurements.

“We wouldn’t have been able to see this unique pattern of interference if we weren’t able to produce enough of these holes in a pattern, which is very hard to do,” said Barrows. ​“Expertise and resources at the CNM and Argonne’s Materials Science Division proved critical to helping us observe this emergent behavior.”

In the future, if researchers can better understand what gave rise to the increase in conductivity, they could potentially find ways to control electrical or optical properties and harness this information for quantum information processing. Insights could also be used to expand our understanding of materials that can switch resistance. Resistance measures how much a material resists the flow of electrons in an electrical current.

“Resistance-switching materials are of interest because they can be information carriers — one resistance state can be 0 and the other can be 1,” said Phatak. ​“What we’ve done can give us a bit more insight into how we can control these properties by using geometric confinements.”