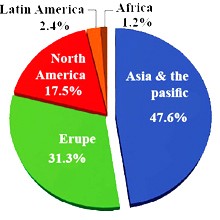 The following table lists the top 15 countries in the abovementioned indicator in the past three years. The indicator has been calculated for the countries who had published more than 500 articles. According to the table, the Asian countries are more focused on the production of nanosciences because nine countries among the top 15 are located in Asia. Singapore has possessed the first rank in the few past years, and more than 20 % of its publications are related to nanotechnology at the moment. Iran has taken the second place of China in 2012, while South Korea and India possess the next ranks.
Top 15 Countries in Nanotechnology Local Share. Data have been obtained from Web of Science for the countries with more than 500 articles until July 2012
The following image shows the infographic of countries according to the number of their nanotechnology articles and their local share in nanotechnology. A star has been allocated to each country for each 5 % local share.