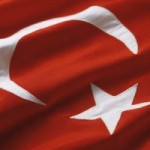 Nanotechnology is going to have a big impact on the future.So, it is necessary for all countries special developing countries, to involve the technology. It seems nanotechnology could be an opportunity for countries to promote their industries and economics. Therefore it is necessary to have a nanotechnology profile for each country. Such profiles helps scientist to know facilities, experts and research centers in their countries.Turkey is a Eurasian country that stretches across the Anatolian peninsula in Western Asia and Thrace (Rumelia) in the Balkan region of southeastern Europe. Over the centuries, it has provided a geographical and cultural bridge between Asia and Europe. This study represents information about Turkey's institutes, research areas, scientists, collaborations, trends and some science and technology indicators in nanotechnology.

The first nanotechnology conference was organized by Bilkent University in Ankara in the year 2005. The interest to this conference was great and the amount of participants was more than expected with high quality of scientific studies. Both state and private universities started to dedicate budgets for nanotechnology research, as well as, government and private foundations to support nanotechnology research after the conference. Additionally, Turkey has participated in the 6th Frame Programme of European Union and proposals related to nanotechnology and nanoscience have already being supported by the Programme. Under this frame, a National Nanotechnology Research Center was established by the contribution of Bilkent University and Turkish State Planning organization.

Turkey’s future strategies for nanoscience and nanotechnology have been estimated and determined by the Scientific and Technological Research Council of Turkey (TUBITAK) which states the aims and objectives by the year 2023. According to the Nanoscienceand Nanotechnology Strategies report of the TUBITAK the prior subjects concerning the nanotechnology are the following:

Scienceindicators can determine the influential individuals, institutions, papers, publications, and countries in their field of study as well as emerging research areas, like nanotechnology, that could impact their work.This unique and comprehensive compilation of science performance statistics and science trends data is based on journal article publications and citation data from ISI web of knowledge. It is an ideal analytical resource for policymakers, administrators, analysts and information specialists in government agencies, universities, corporations, private laboratories, publishing companies and foundations, as well as members of the scientific press and recruiters.

Nanopatents, nano-articles and their citations as well as h-Index are main nanoscience and nanotechnology indicators in current study. H-index is based on a list of publications ranked in descending order by the times cited counts. The h-index is the number of items which is in the h rank of the mentioned ranking and has at least "h" citations. This metric is useful because it discounts the disproportionate weight of highly cited papers or papers that have not yet been cited [2].

Figure 1 shows number of nano-articles published by Turkish scientists during 2000 to 2012. As can be seen, there is significant growth after 2006 when special budget dedicated to nanotechnology in Turkey. Publishing more than 1050 nano-articles in 2012, Turkey ranked 22nd in the world. Turkey is the second largest nanoscience producer in Middle East after Iran. Saudi Arabia, Egypt and Iraq are 3th, 4th and 5th in the ranking respectively. Figure 2 gives share of nano-articles from all scientific publications in Turkey. The share was nearly doubled in 2011 compared with 2006 indicating Turkey attention to production of nanosciences during last years. 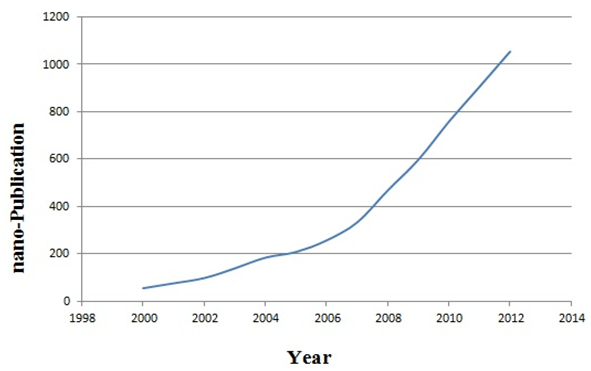 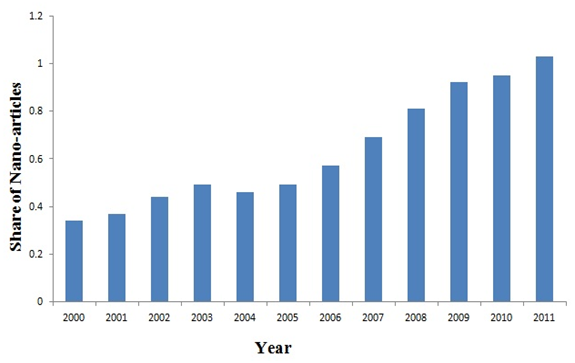 Figure 2 - Share of Turkey’s nano-articles from all its ISI indexed publications. 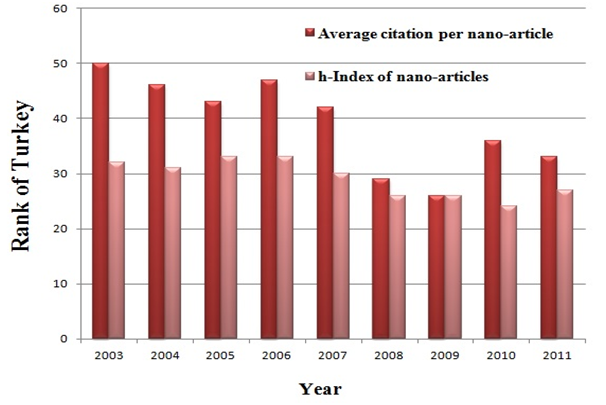 Figure 3 represents world rank of Turkey in two indicators during 2003 to 2012: h-Index and average citations per article. There are steep growths in the rank of both indicators. It means Turkey had considered the quality as well as the quantity of the nano-articles during the time span. It is third country, after Iran and Saudi Arabia, in h-Index in Middle East, but Turkey has lower average citation counts comparing with the EU countries.

Advances in the Turkish nanotechnology industry have drawn a number of young scientists who studied in Turkey and are doing research abroad, mainly in the United States, back to the country [3].

Table 3 reveals universities, institutes and research centers of Turkey which published most nanopublications during 2001 to 2009. Middle East Technical University has 40 undergraduate programs within 5 faculties. Nanomaterials and Devices Group in METU focus on the synthesis and solution processing of carbon nanotubes and metallic/semiconducting nanowires. Their aim is not simply device miniaturization using nanomaterials but rather the utilization of nanomaterials for unforeseen applications through the fabrication of novel devices.Metu-Center Nanotechnology is dedicated to nanotechnology and biotechnology. They are focused on semiconductor nanostructures for nanophotonics and nanoelectronics, magnetic nanoparticles and heterogeneous catalysis.

There is also a Central Laboratory and R&D training Center in METU and the nanotechnology research is mainly focused on biomaterials, intelligent materials and nanocomposites.

Nanotechnology Research Center at Bilkent University is dedicated to research on theoretical and experimental nanoscience and nanotechnology with strong emphasis on education and training. Interest areas of this research center are focused on both theoretical work such as the main problems of nanosciences and applications of nanotechnology in the form of nanotubes, nanowires, quantum dots, magnetic molecules, frictionless surfaces. The center is an interdisciplinary research environment which houses the nanotechnology related research efforts in science and engineering faculties, and serves to all departments in both faculties as well as the other Turkish universities that would like to have access to the center’s facilities. Another private university, Koç University in Istanbul has a Micro-Nano Technologies Research Center and mainly focused on the micromechanical device fabrication, solid state laser materials, electromagnetic actuators, super hydrophobic surfaces as well as thin films of organic materials, surface modification by chemical and physical methods, characterization of nanostructured materials, friction at the atomic scale and nanotechnology of liquids and polymers and synthesis advanced polymers.

The nanotechnology research is not a new subject for the well known state universities namely Hacettepe University in Ankara and Bosphorus (Boğaziçi) University in Istanbul. Hacettepe University with its Departments of Chemistry and Chemical Engineering have been contributing to the fields of nanopolymers, nanocomposites and nanobiomaterials for many years with active research groups working in these fields. Bosphorus University is contributing in the nanoscience and nanotechnology field internationally with its Nanotechnology and Smart Materials Advanced Technologies Research and Development Center. Other than universities there are high technology institutes such as Gebze Institute of Technology, Marmara Research Center which is the research center of The Scientific and Technological Research Council of Turkey, and Izmir Institute of Technology are highly productive in the nanotechnology research area.

All of the mentioned universities and research centers have the international research standards and they have high quality article outcome as a result of those research facilities.

The National Metrology Institute of Turkey (UME) is not an active institute in nanotechnology at Turkey but due to crucial role of UME in developing of nanotechnology in Turkey, it is introduced in this section.

UME works on whose foundation began in 1982, was formally established as an institute tied to the Scientific and Technological Research Council of Turkey (TÜBİTAK) in 1986 for the purposes of facilitating the development of the high-technology production capacity of the country’s industrial sector through building and improving the national measurement and metrology infrastructure. TÜBİTAK UME was established to be a primary level measurement center to meet the needs of private and public sector entities in industry and other relevant areas. TÜBİTAK UME, which has strived to meet the demands of all types of industry through the supply of calibration, testing, repair/maintenance services, as well as training and consulting in the field of metrology, has also aimed at making a contribution to the development of new technologies through the adoption of the newest techniques in measurement and calibration.

In 2007,TÜBİTAK UME ranked among the founding members of the European Association of National Metrology Institutes (EURAMET). In 2008, TÜBİTAK UME joined the ERA NET+ projects under the EU 7th Framework Programme in partnership with other European national metrology institutes. A project proposal made under the Instrument for Pre-Accession Assistance (IPA), for initiating the production of chemical reference materials in Turkey has been accepted. Training of the personnel to be employed in the project began, and work started in 2009. TÜBİTAK UME signed a contract with the Bureau of Metrology of Macedonia (BoM) for the provision of technical support within the scope of a World Bank assistance project.

Table 5 also shows countries which Turkish scientists had the most collaboration with in nanotechnology.USA, Germany and UK are ranked at top of the list.

Turkey mostly follows a free market economy with growing importance in its industry and service sectors. The country’s well managed financial markets and banking system helped the country overcome the global financial crisis in a quicker manner than many neighboring countries[4]. Nanotechnology is a wide ranging field that encompasses many different applications and industries in Turkey. There are many nanotechnology based companies in turkey. Provided below are a few nano-based companies in Turkey and a brief introduction to each of them:

Nanotechnology-NNT produces crystallites of boron and adds to the motor oil, this suspended boron nanoparticles coats the inner sidewalls of the motors of the automobiles which improves friction resistance and extends the motor life.